War-torn Syria may not top many vacation wish lists, but the country’s tourism ministry is hoping to change that – with a little help from “Game of Thrones.”

Bashar al-Assad’s regime released a promotional video Friday with panoramic views of government-held parts of Aleppo, accompanied by an acoustic version of the theme music to the popular HBO television series.

Showcased in the video are aerial shots of wide green boulevards and swimming pools. It’s a far cry from the rebel-held eastern part of the city, where 250,000 people live with daily airstrikes, according to the UN, and where whole blocks of neighborhoods have been destroyed.

Although a constant stream of devastating pictures from Aleppo – including a striking image of a bloodied boy – have captured the world’s attention as reminders of the horrors of war, the Assad regime wants to promote the city as a destination for tourists.

Some may see evoking “Game of Thrones” as an odd choice for a Syria tourism campaign, considering the show’s fictional world of Westeros is a violent place engaged in its own bloody civil war.

But this is only the latest video in a broader tourism campaign by the Syrian government, which last month published idyllic shots of the Mediterranean resort city of Tartus. 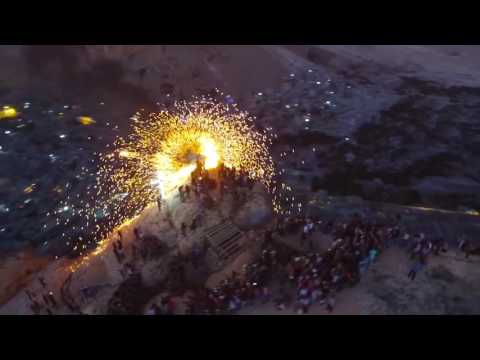 Another video shows a Christian festival in Maaloula. The mountain town, one of the few places in the world where Aramaic, the language of Jesus Christ, is still spoken, was taken by al-Nusra Front, al Qaeda-linked rebel group, in 2013. Regime forces eventually pushed the Islamist group out in April 2014.

#Aleppo, now dubbed as the "World's Most Dangerous City", still boasts a thriving nightlife, as shown in one of this summer's events #Syria pic.twitter.com/kFUDtGvHME

Syria’s state-sponsored news agency last week mocked the perception of Aleppo as one of the “world’s most dangerous” cities, tweeting a video of locals enjoying the city’s “thriving nightlife.”