A ferocious hurricane packing 145-mph winds is prompting hundreds of Guantanamo Bay employees to evacuate and threatens to wreak havoc on Haiti and Jamaica.

Hurricane Matthew is expected to dump torrential rainfall on Jamaica and Haiti on Sunday evening before making landfall Monday.

“This rainfall will produce life-threatening flash floods and mudslides,” the National Weather Service said Sunday. “Preparations to protect life and property should be rushed to completion.”

Many Jamaicans, however, believe they can ride out the storm, putting their trust in a higher power, despite pleas from authorities to leave the threatened coast.

“I’m not afraid, I’m not going,” a woman in Port Royal said. “I know if God wants it to happen, it will happen.”

This image shows a forecast track for Hurricane Matthew, with the storm's eye predicted to be somewhere within the shaded cone on the days indicated.
CNN

“Water systems are at risk as hurricane #Matthew’s approaching,” physician and researcher Keddy Moise tweeted. “Months of work fighting cholera could be lost.”

Water systems are at risk as hurricane #Matthew's approaching. Months of work fighting cholera could be lost. #Haiti

The storm could also be brutal for Cuba, where many houses appear too weak to withstand a hurricane, CNN’s Patrick Oppmann said Sunday.

In Santiago de Cuba, the island’s second largest city, olive-green military trucks and an armored personnel carrier raced around to finish preparations. Santiagueros know about hurricanes. In 2012, Hurricane Sandy ripped through the city downing trees, power lines and killing 11 people in the city and surrounding provinces.

Residents of the city spent much of Sunday securing their roofs, gassing up their cars and mopeds and collecting cash sent by relatives in South Florida via Western Union. Others began to evacuate from low-lying coastal areas, going to government shelters.

Things also might be tricky on higher ground. Officials warned inhabitants of the Sierra Maestra mountains, where Fidel Castro based his camp during the Cuban revolution, of possible mudslides from heavy rainfall.

A man who identified himself only as Orlando said he rents his newly restored three-bedroom home out to foreigners. He fretted the storm would damage his investment.

But he was sure that he, his wife and daughter would escape Matthew’s wrath.

“We have endured a lot of hurricanes here,” he said. “We will endure this one.”

As for the United States, “it is too early to determine if Matthew will directly impact the US,” the National Weather Service said Sunday. “But this dangerous storm will be closely monitored.”

Jamaicans and Haitians braced for Hurricane Matthew as the powerful Category 4 storm slowed to a crawl in the Caribbean on Saturday night, forecasters said.

Those getting evacuated are mostly nonessential personnel. There are no plans to evacuate the 61 prisoners detained at the facility that holds terror suspects.

“Remaining personnel and their families will be taking shelter in their homes or designated locations,” base officials said.

It’s unclear when the evacuees will be brought back, officials said. 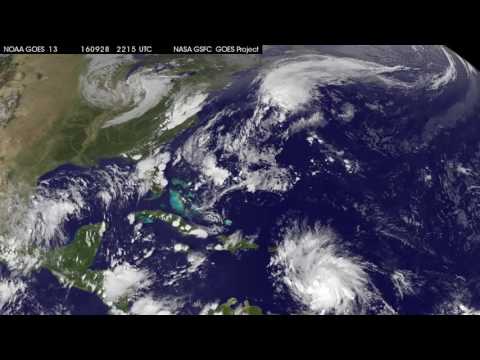 In the next few days, Matthew is expected to dump 15 to 25 inches of rain on southern Haiti, with as much as 40 inches in some areas, the National Weather service said.

Eastern Jamaica, the Dominican Republic and eastern Cuba will get pummeled with as much as 25 inches in some areas.

After hitting Jamaica and Haiti, Matthew could slam Cuba, the Bahamas and South Florida later this week, forecasters said.

Although weather models show the outskirts of Matthew just scraping the southern part of Florida, Rick Knabb, director of the National Hurricane Center in Miami, urged Floridians to prepare and buy supplies.

Matthew briefly strengthened Friday night into a Category 5 storm, becoming the strongest hurricane in the Atlantic Ocean since Felix in 2007. But it is now a Category 4 storm, meaning it carries winds between 130 and 156 mph (209 to 251 kph).

“Some fluctuations in intensity are possible this weekend, but Matthew is expected to remain a powerful hurricane through Monday,” the National Hurricane Center said.

Bracing for a monstrous storm

Storm shelters are open, agencies are ready to support evacuations, street people are being taken to shelters, utilities are preparing to deal with outages and fishermen have been asked to remain in safe harbor, the Gleaner reported.

Marcia Forbes, a business owner in Kingston, told CNN she was preparing for a rough couple of days.

She waited in line to fill her car with gasoline, brought in her potted plants and filled her bathtub with water in case service gets interrupted during the storm. She also placed sandbags against the shutters of her multimedia company and covered her office computers with plastic.

“Having lived through Hurricane Gilbert in 1988, I know what a Category 3 hurricane can do, (much) less a Category 4 or 5,” she told CNN.

“Everyone in my community is taking this hurricane seriously and getting their homes shuttered up.”

Jamaica Prime Minister Andrew Holness told journalists that while the hurricane posed a great risk to lives and property that it could also blow the economy off course, The Gleaner, a Jamaican newspaper, reported.

“The biggest concern is the impact on the economy. … This weather event could derail our economic program,” the newspaper quoted Holness as saying Saturday while touring areas that could be most affected by Matthew. “We are ensuring that all government agencies understand that they have a role in the speedy recovery. That speedy recovery will ensure that our economy does not suffer unnecessarily.”

“Of course, on a local level, community level, we expect that we will see significant damage to property and dislocation and human suffering that will come from such an event if we do not prepare. It could be significant.”

Many people, however, didn’t plan to evacuate. Several women in Port Royal, a fishing village outside Kingston, said their families would hunker down in St. Peter’s, the local church.

A woman told CNN she believed the shelters are unsafe.

“We’re just going to get some rain and breeze,” said the woman, who gave her name as Josephine. “We can ride it out in the church.”

Another Port Royal woman, who also planned to shelter in the church, said the government always warned people to leave. She said her house only lost its roof in Hurricane Ivan, a 2004 Category 5 storm that passed near Jamaica, killing at least 14 people and leaving thousands homeless.

The woman acknowledged some fear, but she had weathered Ivan. “You know, I trust in God,” she said.

IBC Airways has canceled all flights Monday to and from the US naval station at Guantanamo Bay because of the approaching storm, the naval station said via Twitter.

American Airlines and Delta Air Lines issued travel warnings for their customers, saying change fees can be waived for flights to some destinations.

The US State Department issued a travel warning Sunday, urging citizens in Haiti to leave quickly if they can.

“Given the approaching hurricane, there is limited time available for a safe departure,” the State Department said.

“We recommend US citizens depart Haiti if possible and work with commercial air carriers to leave prior to the arrival of the hurricane. Airports will close once conditions deteriorate and safe travel is not possible. “

CNN’s Joe Sterling and Joe Sutton in Atlanta, Patrick Oppmann in Cuba, Michael Holmes in Jamaica and Lindy Royce in Washington contributed to this report.