Getting boys and men involved in changing the conversation is key, experts say

In a striking new public service announcement trying to change the conversation about sexual assault, tween, teen and college students, girls and boys, women and men, look directly at the camera and don’t say a word. Instead, they hold up posters with statements that speak volumes about the messages society has been sending for far too long. 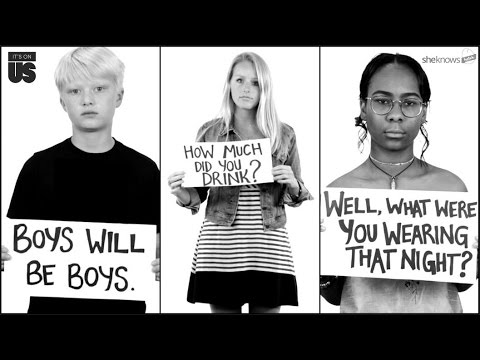 “How much did you drink?” reads the sign one teenage girl is holding.

Other posters include statements and questions such as “Don’t wear short skirts” and “Were you drunk?”

A teenage boy holds up a sign that reads, “She was ‘asking for it.’ “

Cece, a 17-year-old high school senior, is showcased with a sign that asks, “Well, what were you wearing that night?”

“To me those messages mean that … I was created to be a sexual object, something to be acted upon but not meant to act myself, not meant to fight back – to have a voice, to be empowered. But mostly that I do not deserve justice,” Cece said in an email interview. (The creators of the video do not share the last names of the children who participated for privacy and security reasons. No children in the video are victims of sexual assault.)

We often forget or fail to recognize that words are just as harmful as institutions, Cece said. Comments such as the ones in the video represent a form of “systematic oppression,” she believes.

“We beat girls down until they become too afraid to report the sexual assault because of the shame that comes with being violated,” she said. “Meanwhile, we do not guilt boys for being sexual assaulters.”

Can I remind you that Cece is just 17 and has not even entered college yet? If girls and boys her age and younger get this message before they start college, think about how much more aware they will be about sexual assault before they get to campus, how supportive they will be of survivors and how empowered they will be to stand up and intervene if they witness dangerous behavior.

Should your child read the Stanford rape victim's letter?

That’s the thinking behind the new public service announcement created pro bono by SheKnows Media, a leading women’s lifestyle digital media company, in conjunction with the Ad Council, a private nonprofit organization focusing on key issues, for the second anniversary of It’s On Us. It’s On Us, created as part of a White House initiative in 2014, is now a public-private partnership that seeks to fundamentally change how we think and talk about sexual assault.

The message of the video is really about the need to dramatically change the conversation about sexual assault, said Rebecca Kaplan, director of It’s On Us.

“We see that this has been so culturally ingrained because starting at the age of 2, starting at the age of 4, little boys are told to ‘man up.’ We’re seeing that young girls who are 7 are being told not to wear short skirts. So that victim-blaming culture really needs to stop, and it needs to start early,” said Kaplan, who has been with It’s On Us since it was founded.

The video featured tween, teen and college students who are part of SheKnows Media’s Hatch program, which aims to teach media literacy to young people and empower them to create content around issues they care about.

‘Boys will be boys’

Eleven-year-old Finn, a sixth-grader and a member of the Hatch program, participated in the video and held up signs that read, “Be Aggressive,” “Boys will be boys” and “Don’t act like a girl.”

“Sometimes I hear older boys say, ‘Don’t act like a girl,’ ” Finn said. “We are being told as boys to act a certain way.”

Messages such as “Boys will be boys” can be incredibly damaging because those statements “sort of excuse” behavior that is inappropriate, said Kaplan. “So when we do that for … even for small things, it does create this culture of not respecting each other, not respecting each other’s space, and that turns into the rape culture that we have today.”

Boy power! Watch these tweens reject the 'be a man' stereotype

Getting boys and men involved in the conversation is critical, said Kaplan.

“This is really an everyone issue. It’s not just a women’s issue. And so I think it’s really important to see young men, old men, all men having this conversation, being present and showing their support,” she said. “I mean, we hear all the time we can’t have equality if men’s voices are not supporting that.”

Since It’s On Us was founded, more than 360,000 people have taken its pledge to help end sexual assault. There have been 1,400 events at more than 530 college campuses across the country, according to Kaplan.

The issue hits very close to home for Kaplan. Eight years ago, during her freshman year of college, a close friend was sexually assaulted. “What came of that situation is, when she did finally come forward, I had no idea what to do,” she said. “I had no idea where she could go. I had no idea what the options were. People just weren’t talking about it like they are (today).”

For too long, sexual assault has been an issue that was the burden of survivors alone, she said. “There’s a lot of internal victim-blaming, not to mention external victim-blaming, and so we’re really at the point today where, unfortunately, this is such a prevalent issue, and the only way to prevent it is to educate, engage and empower everyone to be a part of the solution.”

That means being active bystanders and not being afraid to step in and speak up if you see something that does not seem quite right, she said. Kaplan points to the case of a Florida football player working as a bouncer this summer, who, along with a co-worker, stepped in to stop an alleged rape behind the Gainesville bar where they worked.

“Those small acts of bravery are not only the right thing to do, they’re the cool thing to do,” she said. “We live in a culture, oftentimes, where people are just kind of like, ‘Mind your own business; don’t get involved,’ and that shouldn’t be the case.”

In a way, everyone in the new video acted as bystanders, said Cece, the high school senior.

“The significance of us holding up those signs and saying, ‘We see you,’ just by looking into the camera, is our way of highlighting that it really is on all of us,” she said. “That this is not just a problem for the person who has been raped or assaulted, this is universal. It’s our way of taking some of that weight off of the victim and placing it on our own shoulders. The video says that we hear you, and we are here for you.”

The hope now is that the video, which is being showcased across the digital platforms of SheKnows Media, the Ad Council and It’s On Us, is watched and shared far and wide by tweens, teens and college students.

“It’s also just really important to get … teens involved and talking about it at an early age,” said Megan Sigesmund, vice president of campaign management and external affairs for the Ad Council.

For Kaplan, thoughts of her close friend and what she experienced her first year of college drive her to keep the conversation moving.

“For me, this is really justice for her, to a certain degree,” she said. “Seeing how the movement has changed and how much more open we are and how we’re really working together to change this has been very inspiring, and it is a little bit of justice for her. That’s what keeps me going.”

What do you think is the best way to change the conversation about sexual assault? Share your thoughts with Kelly Wallace on Twitter @kellywallacetv.