President Barack Obama calls for the "hard work of diplomacy"

The brazen strike on an aid convoy in Syria prompted a fierce denunciation Tuesday from UN Secretary-General Ban Ki-moon, who called the attack “sickening, savage and apparently deliberate.”

“Just when we think it cannot get any worse, the power of depravity sinks lower,” Ban told world leaders convening at the UN General Assembly annual meeting.

“The United Nations has been forced to suspend aid convoys as a result of this outrage. The humanitarians delivering life-saving aid were heroes. Those who bombed them were cowards.”

Monday night’s attack marked the latest frustration in the Syrian crisis as world powers work to forge a cessation in hostilities and finds ways to end the conflict, now in its sixth year.

Getting aid to areas cut off by fighting has been a growing concern for humanitarian agencies – with trucks destined for eastern Aleppo, where an estimated 250,000 civilians have been short of food, medicine and water.

The area was essentially cut off in July, when the Syrian government launched a siege and encircled the rebel-held area.

The aid convoy was hit in the area of Urum al-Kubra, west of Aleppo, where a warehouse belonging to the Syrian Arab Red Crescent also was struck, the United Nations and aid agencies said. Rebels reportedly hold the area. The attack prompted the United Nations to halt its aid operations in Syria.

The UK-based Syrian Observatory for Human Rights reported that aid workers had been killed in an “aerial bombardment.”

The International Committee of the Red Cross said that about 20 civilians were killed, as was the director of the Red Crescent’s Urum al-Kubra branch, Omar Barakat.

Eighteen of the convoy’s 31 trucks were hit, the United Nations said.

No one has claimed responsibility and it is unclear whether an airstrike hit the convoy or whether it was shelled.

Barrel bombs are commonly used by the regime, while rebel and militant groups are not known to have the capacity for air power.

But Tass, the Russian state news agency, quoted the Defense Ministry spokesman as saying the convoy had been followed by a “terrorists’ pickup truck carrying a large-caliber mortar.”

The Syrian Coalition, the principal opposition, blames “Russian and the Assad regime’s jet fighters’ and said it holds “Russia fully and directly responsible for this heinous crime.

CNN cannot confirm the authenticity of the video or who was responsible for the attack. 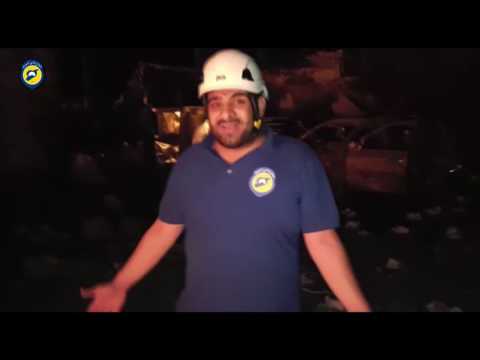 “From what we know of yesterday’s attack, there has been a flagrant violation of international humanitarian law, which is totally unacceptable,” International Committee of the Red Cross President Peter Maurer said in a statement.

“Failing to respect and protect humanitarian workers and structures might have serious repercussions on ongoing humanitarian operations in the country, hence depriving millions of people from aid essential to their survival.”

Saying “there is no military solution,” Ban particularly blamed Syrian President Bashar al-Assad’s regime for the atrocities and horrors over the years.

“Many groups have killed many innocents – but none more so than the government of Syria, which continues to barrel bomb neighborhoods and systematically torture thousands of detainees.

“Powerful patrons that keep feeding the war machine also have blood on their hands. Present in this hall today are representatives of governments that have ignored, facilitated, funded, participated in or even planned and carried out atrocities inflicted by all sides of the Syria conflict against Syrian civilians.”

US President Barack Obama, in his UN General Assembly remarks, said “the hard work of diplomacy” must prevail and emphasized that “there’s no ultimate military victory to be won” in Syria.

During his UN speech, French President Francois Hollande criticized the inaction in Syria, saying, “The Syrian tragedy will be seen by history as a disgrace for the international community if we do not end it quickly.”

Hollande urged the UN Security Council to meet as soon as possible on the conflict and warned it should “not be a theater for fools.”

Syrian ceasefire: Is it all over?

What happens to the ceasefire?

Monday night’s attack came just hours after Syrian authorities declared an end to a fragile ceasefire in the war-torn country. The ceasefire had been called specifically to allow aid into some of the most desperate parts of Syria.

While some aid was delivered, agencies were severely hampered in the initial days of the ceasefire last week, unable to cross the border into Syria as they lacked permits from the government, UN officials said.

At least 32 people were killed in separate attacks Monday in Aleppo and its western suburbs, according to the Syrian Observatory for Human Rights.

The United States and Russia have been essentially on opposing sides of the conflict but had recently agreed to the ceasefire and some cooperation.

Syria: Ceasefire hangs in the balance as US, Russia spar

But the two powers were quick to accuse each other of violating the ceasefire, and Moscow has long opposed the US position of supporting and arming what it calls moderate rebels to fight ISIS.

The US State Department blamed Moscow and the Syrian regime for hampering the delivery of aid.

“For more than a week, we have urged Moscow to fulfill the commitments it made in Geneva to facilitate the unimpeded flow of humanitarian aid to the Syrian people,” the department said in a statement.

“And for more than a week, the Syrian regime repeatedly denied entry to these UN convoys, preventing them from delivering urgent food, water and medical supplies to desperate Syrian citizens.”

The Kremlin said there was little hope for the ceasefire’s renewal, state television Russia 24 reported.

David Butter, associate fellow of the Middle East and North Africa program at Chatham House, called the latest development a “severe setback” and said the prospects for peace “look very poor” at this point.

He said that while the details of exactly who did what were likely to remain unclear, the idea of allowing humanitarian aid into besieged areas would go against the Syrian regime’s “starvation strategy” to win back territory.

“It probably won’t deter (US) Secretary of State (John) Kerry from trying to keep some discussion going, but really the worst expectations for the ceasefire have been fulfilled,” Butter said.

Kerry has little choice but to keep trying for another ceasefire, he said, because “he is too far committed. … He can’t really pull back, because he doesn’t have anything to pull back to.”