Knievel's son: "He'll be lucky if he doesn't blow up on the ramp"

On September 8, 1974, Evel Knievel climbed into a steam-powered “rocket cycle” and blasted off a cliff over Idaho’s Snake River.

He failed to reach the other side when his craft’s parachute deployed too soon and landed him – largely unhurt – at the bottom of the canyon, but the much-hyped stunt only added to Knievel’s daredevil legend.

Now, 42 years later, veteran Hollywood stuntman Eddie Braun plans to pay homage to the late Knievel by making the jump himself. After years of planning, Braun says he will attempt the Snake River Canyon leap on Saturday with the same type of aircraft and technology.

“Evel Knievel left one side of the canyon in 1974,” said Braun, who was a lead stuntman on the “Rush Hour” movies with Jackie Chan and Chris Tucker. “In 2016, I hope his spirit lands on the other side.”

You might think such a tribute would thrill Knievel’s son Kelly, who oversees his dad’s commercial brand and legacy. But no. In fact, he has deeply ambivalent feelings about Braun’s stunt.

“I just think he’s out of his mind,” Kelly Knievel said in a recent interview. “I’m skeptical he’s going to make it over the canyon. He’ll be lucky if he doesn’t blow up on the ramp.”

Ask Braun why he is doing this and he’ll tell you a story about how, as a boy in the early 1970s, he met Knievel during an event at the old Ascot Park racetrack in Gardena, California.

Entranced with the car-jumping motorcyclist, young Eddie pushed his way through the crowd to get Knievel’s autograph.

“This guy wore a cape. He was like a superhero. He was larger than life,” Braun said. “It made such an impression on me. From that moment on I didn’t want to do anything else but be like Evel Knievel.”

He wasn’t alone. Back then, kids everywhere grabbed their wheelie bikes, made rickety ramps and staged backyard jumps to be more like the daredevil in the star-spangled white jumpsuit. His influence lives on today in extreme sports, where every high-flying BMX or motocross rider seems to be channeling his fearless spirit.

Knievel got his start in the mid-1960s, jumping rows of cars at rural fairgrounds around the West before ABC’s “Wide World of Sports” took interest and began televising his exploits. With each successful jump, audiences wanted him to leap one more car – 14! 15! 16! – which he did with astonishing ease. 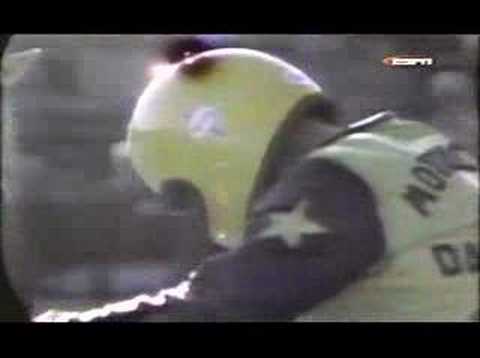 But it’s Knievel’s crashes that people most remember. His failed attempt to leap the Caesar’s Palace fountains on New Year’s Eve 1967 was replayed over and over on TV, his crumpled body tumbling in slow motion across a Las Vegas parking lot. After the crash, Knievel lay unconscious in a Nevada hospital for almost a month.

Eight years later he cleared 12 buses in front of 90,000 people at London’s Wembley Stadium before crashing in similarly spectacular fashion. Over his career he suffered multiple concussions, shattered his pelvis three times and broke more than 35 bones.

Braun understands this. It’s the fascination we all have with death.

“Nobody wants to see me get killed,” he said. “But they also don’t want to miss it if I do.” 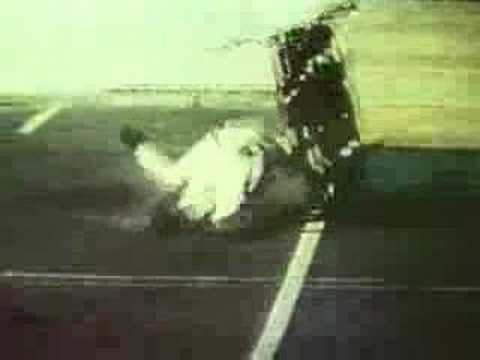 Braun, 54, has spent three years preparing for this jump, which will mirror Knievel’s in almost every way.

He enlisted Scott Truax – son of Robert Truax, who built Knievel’s Skycycle – to design his rocket, named Evel Spirit. They have replicated the elder Truax’s original steam engine but re-engineered its parachute-deployment system.

Braun will leap from private property near Twin Falls, a few miles upriver from Knievel’s original spot, where he has built a 10-story ramp. He said he has insurance and all the necessary federal and state permits.

“We even had to get permission from the FAA,” said Braun, who estimates he has spent $1.5 million out of his own pocket on the venture.

If all goes according to plan Braun’s craft will fly some 2,000 feet into the air at a top speed of more than 400 mph. He’ll deploy an initial parachute to slow him down, followed by a second chute that will gently lower the rocket to the ground on the other side of the canyon. Braun himself will not be wearing a parachute, he said.

Some people, including Kelly Knievel and a Twin Falls city councilman, have been vocal about their doubts that Braun can pull it off.

“I wouldn’t get in a piece of tin and blast off over a cliff,” Knievel told CNN. “If he makes it, he’ll be honoring my dad’s legacy. If he splats his brains out in the canyon it’ll be a different story.”

“I’ve been fueled by the skeptics, the people who think it can’t be done,” he said. “There are people who say I’m on a suicide mission, or that I’m going to blow up. But I’m not a foolish man. I’m not doing something stupid.”

The jump is set for Saturday, September 17, although Braun said he may postpone it a few days if the weather doesn’t cooperate.

There’s only room at the launch site for a few hundred spectators, so Braun is hoping to livestream the event. His crew is also filming the jump for a documentary.

The Snake River Canyon feat may not seem as spectacular in 2016 to audiences jaded by jetpack pilot Yves Rossy, high-wire walker Nik Wallenda or the aerial exploits of athletes in ESPN’s X Games. But to Braun, it’s a deeply personal way to honor the man who inspired him.