Arquette was best known for film roles, including one in “The Wedding Singer” and another in “Pulp Fiction.”

Born Robert, Arquette was the sibling of actors Rosanna, David and Patricia Arquette.

A 2007 film about her transition to becoming a woman, “Alexis Arquette: She’s My Brother,” was popular on the film festival circuit.

In February, actor David Arquette reportedly said during an appearance on “Kocktails with Khloe” that Alexis no longer identified as transgender.

Richmond Arquette wrote that Alexis was with brothers, sisters, a niece and “several other loved ones” at the end. David Bowie’s song “Starman” was playing.

Richmond Arquette described Alexis to CNN as “a force” who “died as he lived, on his own terms” and said he was happy to have been “with him as he began his journey onward.”

A cause of death was not specified.

Alexis Arquette began acting at an early age. Her first role was as a transvestite named Georgette in the 1989 film “Last Exit to Brooklyn.”

She would go on to appear in dozens of roles from low-budget movies to television roles.

Arquette was one of the earliest high-profile advocates for transgender rights and said she identified with being a woman at a young age.

In 2009 she told Dr. Drew Pinksy during an interview on “Larry King Live” that she was born into “a pretty liberal family.”

“I’ve worn makeup since I was 12,” Arquette said. “They weren’t in denial so much as their fear was that if I came out as transgender and live my life as a woman that might receive a lot of flak from people on the street.” 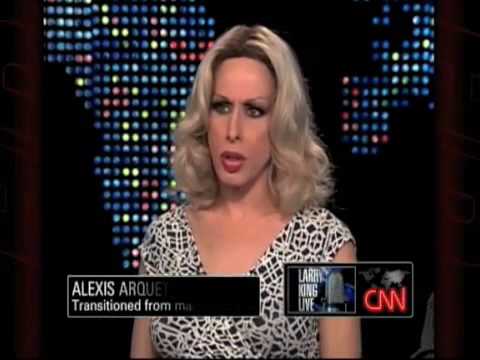 “R.I.P. my sister Alexis Arquette,” Boy George tweeted. “Another bright light gone out far too soon. Love to the family and all that loved Alexis.”

R.I.P my sister Alexis Arquette. Another bright light gone out far too soon. Love to the family and all that loved Alexis.

David Arquette tweeted thanks for the support and love. He called Alexis “my hero for eternity.”

Thank you all for your love and kind words about Alexis. My hero for eternity pic.twitter.com/Z18xLtYTBv