On Wednesday, Nevada Republican Rep. Joe Heck told CNN he trusts Donald Trump to have his finger on the nuclear button.

Less than 24 hours later, that response became the centerpiece of a major new ad against his candidacy for the hotly-contested open Senate seat in Nevada, the one Democratic seat Republicans have a reasonable chance of winning this November. It’s another example of the risks Republicans in close contests take when they align themselves with Trump.

Democrat Catherine Cortez Masto, a former state attorney general, believes she can capitalize on Heck’s unflinching trust in the controversial GOP presidential candidate to shake up the race, which appears to be a dead heat.

The two are running to replace Senate Democratic Leader Harry Reid who has held the seat for 30 years. With control of the Senate up for grabs, the outcome of the race could determine which party controls the Senate.

Republicans currently have a 54-46 advantage in the Senate. While there are several GOP seats in play, Reid’s is the only Democratic seat Republicans have a serious chance to take over.

Several Democratic campaigns have worked in key battleground states even before Trump became the nominee to tie every GOP candidate to the billionaire and some of his most provocative statements.

Unlike Heck, not all those Senate candidates have backed Trump.

“At this time, I feel that when you look at the options, the individual who probably has the best ability to rebuild our national defense and change our economy is our current nominee,” Heck told the Reno Gazette Journal last month. 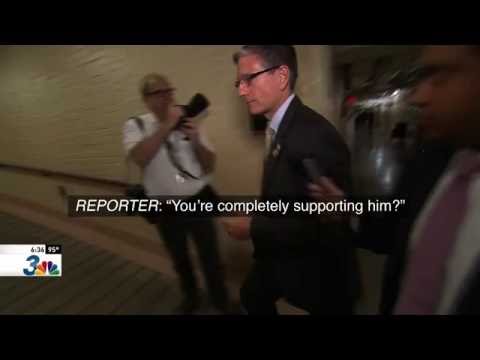 “Let’s be very, very clear, I do not support Trump,” Heller is shown saying.

It then turns to a clip from a TV story from CNN’s Manu Raju interviewing Heck as they walk through a basement hallway in the Capitol on Wednesday.

“You trust him to have his finger on the nuclear button?” Raju asks.

“Why do you say that?” Raju pressed.

“Why wouldn’t I?” Heck answered.

Cortez Masto’s campaign said it will spend several hundred thousand dollars on the ads, which will air in Reno and Las Vegas.

It remains to be seen if the ad – which implies Trump could be a reckless commander in chief – will be effective against Heck, who has a long military background. Heck is a brigadier general in the Army Reserves who served twice in Iraq. He is also a member of the House Armed Services Committee.

Brian Baluta, a spokesman for Heck, cited the congressman’s military experience in dismissing the ad.

“This is an ad from a candidate who supports putting Iran on the path to a nuclear bomb, and has no problem with her mentor, Harry Reid, blocking funding for our troops in the US Senate,” Baluta said. “If Ms. Cortez Masto wants to make this race about which candidate has the knowledge and experience to keep us safe, then we are confident Nevadans will choose Iraq veteran and Brigadier General Joe Heck.”

Also, Heck’s trust in Trump may pay political dividends for the Nevadan because the GOP presidential candidate is essentially tied with Democrat Hillary Clinton in a state that President Barack Obama won twice.

In the story that aired on CNN that included the Heck interview, several other Republican members of the House and Senate – including party leaders – also said they trusted Trump with the nuclear codes.