Birth of a hurricane: Inside Hermine at 5,000 feet

It came into the world without celebration or joy, or any of the usual fanfare that accompanies a birth announcement.

A team of US Air Force reservists witnessed the unwelcome birth Thursday of Hurricane Hermine in the skies above the Gulf of Mexico.

Flying through the eye of the storm several times, the crew of Hurricane Hunters — including meteorologist Maj. Tobi Baker — could see Hermine was a bit messy and unorganized — but in several key parts of the storm, it packed powerful, strengthening winds of around 80 mph.

Don't see this every day: I saw the birth of Hurricane Hermine today aboard a WC-130J Hurricane Hunter! #avgeek @CNN pic.twitter.com/2KCY3oTZMS

The crew’s observations convinced the National Weather Service that this roiling, rainy little monster had crossed the threshold from a tropical storm to a full-fledged hurricane.

The basic message to coastal residents: evacuate or batten down for the first hurricane to hit the region in a decade. Hermine is coming to town and packing a punch. The storm’s new status triggered emergency preparedness officials to take their plans to the next stage.

The Air Force Reserve 53rd Weather Reconnaissance Squadron is America’s Hurricane Hunter unit. Based at Keesler Air Force Base near Biloxi, Mississippi, the squadron operates ten WC-130J Hercules cargo planes, outfitted to collect storm data from an area stretching from the western Atlantic to the Gulf of Mexico – as well as the Pacific around Hawaii.

We're airborne as @CNN flies TOWARD a raging tropical storm heading toward Fla. over the Gulf of Mexico #avgeek pic.twitter.com/Np2EAgGIx0

The early warning data gathered by these hunters potentially saves countless lives in the paths of storms.

Many times in the cockpit Thursday, nothing but gray clouds filled the windshield, forcing pilots to rely on weather radar as they hurtled blindly forward 5,000 feet high, at about 200 mph.

About 130 miles north of the Florida Keys, pilot Philip Blancher pointed to a multi-colored radar screen on the instrument panel in front of him.

“See that V-shaped area?” he asked. “That’s something we want to stay away from.”

Lead pilot Lt. Col. Jeff Ragusa chimed in, “That’s an environment that would be conducive to tornadoes.”

Hermine as it looked on the plane's radar
Thom Patterson/CNN

No big thing. Flying close to tornadoes in the middle of a storm amounts to just another day on the job for these guys.

A typical crew is five: two pilots, a meteorologist, a navigator and a loadmaster/weather sensor operator.

Thursday’s flight included two extra navigators and several news media types. Back in the cargo hold we media types sat in red canvas benches. At the first sign of turbulence some of us clutched desperately to just about anything that was bolted down.

“Woah!” I heard myself say – feeling the giant plane fall out from underneath me. Hey, they did warn me that flying on a Hurricane Hunter was a lot like bull riding. But apparently that day’s turbulence was nothing to write home about. “I wouldn’t rate the bumps on this flight in my top ten,” said Ragusa. “It’s not anything a commercial airliner wouldn’t experience.”

I hope I don't need this! We're about to fly into 60mph tropical storm winds off Fla on a USAF Hurricane Hunter! pic.twitter.com/2no0x2BqGV

Smooth rides don’t necessarily mean a tame storm. Hurricane Hunters who flew into Hurricane Katrina in 2005 reported relatively little turbulence because the up-and-down winds were fairly weak. But Katrina’s horizontal winds were devastating, as people on the ground learned all too well.

The nature of their jobs makes Hurricane Hunters the kings of handling turbulence. Several times each year, airline injuries from air turbulence hit the news headlines. Just this week, 12 people were sent to the hospital after a Houston-to-London flight had to make an emergency landing in Ireland.

“Turbulence is never something that should hurt anyone, if passengers are paying attention,” said Ragusa, who flew Boeing 737s for 12 years as a commercial airline pilot.

“It’s very difficult to get surprises about turbulence,” he added. “The weather technology is so good these days that they’re really able to predict that pretty well.”

Fly into a raging hurricane on a USAF Reserve Hurricane Hunter, a Lockheed Martin WC-130J Hercules 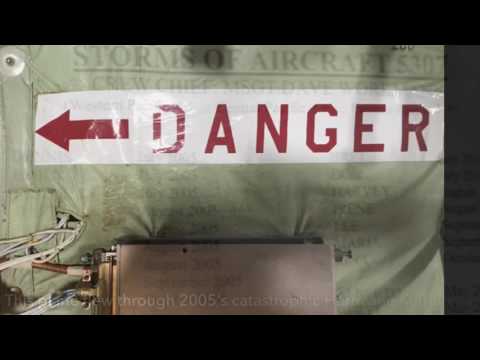 At one point, Tech. Sgt. Tom Barnaby announces, “Lemme show you the toilet.” As you’d expect in the military, it was nothing fancy. It’s bolted down in the right  rear of the cargo hold with a military green canvas curtain for privacy.

“What happens on board, stays on board,” said a sign on the bulkhead baring a skull and crossbones.

Stowed throughout the cargo hold was safety gear including survival vests, bags for passenger emergency oxygen supplies and parachutes.

“It’s not like we’re going to bail out in the middle of a hurricane,” Barnaby said.

On the left side of the plane, Baker sat at his station lit by the green glow of screens showing where Hermine’s uglier weather demons were located.

His sophisticated array of displays and weather sensor technology helped him direct the pilots precisely where to fly to get the best readings of a storm’s wind speed, direction and barometric pressure.

On the right side of the plane sat Barnaby at his own monitor station. Barnaby – an 8-year Hurricane Hunter veteran – was in charge of the dropsondes.

Dropsondes were made up of about ten white plastic tubes about eight inches long.

Behind Barnaby was a metal cylinder attached to the plane’s deck, sticking up about four feet. He loaded a dropsonde into the cylinder’s chamber, closed it, and then waited. When a signal from the crew came, Barnaby pressed a button on his console.

A giant spring inside the cylinder shot the dropsonde out into the malestrom.

The noise cuts through the howl of the wind and the roar of the plane’s four propeller engines.

As the $600 dropsonde fell toward the Gulf, a parachute-like stabilizer popped out, slowing its descent and giving the tube more time to broadcast data to Barnaby’s work station. It sent exact measurements of the storm’s wind speed, pressure, air temperature and other data in real time.

And then there was the so-called “SMERF” – the stepped frequency microwave radiometer — a metal box bolted under the plane’s wing. Using microwave radar, the SMERF measures wind speed on the ocean’s surface from as high as 10,000 feet.

At Barnaby’s workstation, software spit out digits and colorful graphs – a data-geek’s dream. Five dropsondes would be jettisoned out the aircraft on Thursday. Each one painted a data picture that – when all the numbers were crunched – showed the storm intensifying as it bore down on the US.

At 2 p.m., based on the plane’s data, the National Weather Service declared Hermine a hurricane. “It makes you feel like you’re doing something worthwhile, despite the fact that were putting people into harm’s way,” Ragusa said.

News of the upgrade prompted the crew to re-count their “pennies.”

Inside Hermine, visibility on the flight deck of an Air Force Hurricane Hunter was zero at times.
Thom Patterson/CNN

Among Hurricane Hunters, pennies are the number of hurricane eyewall penetrations they’ve racked up during their careers. Some boast as many as 350 or 360, Baker said. Special patches are awarded for penny milestones 50, 75, etc.

Is this really necessary?

In this era of amazing technology, is it still necessary to put flight crews and airplanes with $13-million price tags in harm’s way to collect hurricane data?

New drone technology is everywhere. Global Hawk drones – originally developed for spying – are already used to study weather conditions around the outside of hurricanes. Why not build giant, robust hurricane hunting drones that could fly inside storms and replace these piloted planes?

“The technology already exists to develop that — if someone wanted to spend the money,” said Ragusa. “But there’s not a need to be developing it. Otherwise, they’d be doing it.”

The safety record of the Air Force storm chasers is impressive. No planes have been lost in more than 40 years, Ragusa said. In 1974, an Air Force WC-130 with the callsign Swan 38 was lost in a typhoon off Guam, killing all six crew members.

After an eight hour-flight, our aircraft touched down back at Keesler.

Soon, another WC-130J took off to chase the newborn hurricane, as it moved toward landfall.