She's gotten pushback on a few of her scientific claims

Stein is a retired medical doctor

Green Party presidential nominee Jill Stein has been waging an uphill battle for name recognition as she pursues her White House bid.

But as she emerges in the public eye – she is participating in a CNN-hosted town hall on Wednesday – so have some of the retired medical doctor’s past controversial comments on vaccines, her concerns about wireless Internet use being linked to poor health and her call for a moratorium on genetically modified organisms, or GMOs.

Emerging out of the mid-20th century environmental movement, the Green Party is at its foundation skeptical of establishment guidance and wary of corporate influence in all areas, including science. Stein, the face of the Green Party, has experienced significant backlash online as she has moved from her base within the Green Party to a national audience.

The critiques have been particularly cutting because she has railed against her mainstream opponents as anti-science and called for legal action against oil companies for disseminating information at odds with climate science.

My attorney general will prosecute Exxon for lying to the world about climate change. We need to end fossil fuels before it's too late.

The Green Party is first and foremost an environmentalist political movement, constantly calling for action over the established threat of climate change. Stein has made her signature policy a “Green New Deal,” which would attempt to revolutionize the US energy system and combat climate change.

Stein slammed the notion she was anti-science, telling CNN on Wednesday it was an attempt “by our detractors in the political establishment, amplified by some in the media, to discredit our campaign.”

The most pervasive of the critiques has been Stein’s past statements with regard to vaccines.

Her critics have said Stein played toward so-called “anti-vaxxers” when she told The Washington Post people had “real questions” over vaccines and their potential side-effects.

In an “ask me anything” post on Reddit, she accused the regulatory system in the US of corruption, calling the vaccine approval regime a case where “the foxes are guarding the chicken coop.”

Stein, a graduate of Harvard Medical School, says criticism of her on the issue is akin to the “‘birther’ controversy that hounded President (Barack) Obama” and “swift boat” attacks, made against John Kerry, a decorated Vietnam War veteran and the 2004 Democratic presidential nominee.

“Dr. Jill Stein has repeatedly articulated her support for vaccinations in interviews and online,” Stein’s campaign said in a statement.

The third-party candidate has said her concern stemmed from corporate influence in the regulatory space, which she believes could prioritize profit over health. In response to an inquiry, Stein said Wednesday morning that she is effectively “the most pro-vaccine and pro-health candidate in this race.”

Asked if “real questions” about vaccines remain, the Stein campaign said it was still concerned over pharmaceutical industry influence over the Food and Drug Administration’s approval process and cited a 1998 anonymous survey of FDA medical officers.

“Anyone who supports vaccinations and wishes to prevent dropping vaccination rates should be concerned about the erosion of public trust caused by the corrupting influence of the pharmaceutical industry in regulatory agencies and government in general,” Stein said in the statement.

The vaccine issue has been a thorny one in recent years, with skeptics taking root in the left and right ends of the US political spectrum.

Several other politicians have gotten flak on the issue, including Republican nominee Donald Trump and former Rep. Michele Bachmann, whose insistence on a potential link between vaccines and autism contributed to her failed 2012 GOP presidential bid.

Trump has voiced his concerns over vaccines for years, writing on Twitter in 2012: “Massive combined inoculations to small children is the cause for big increase in autism….”

In 2014, he wrote, “I am being proven right about massive vaccinations—the doctors lied. Save our children & their future.”

Asked about how he would handle the issue as president in CNN’s Republican debate in September 2015, Trump said, “I am totally in favor of vaccines, but I want smaller doses over a longer period of time.”

There has been no established link between vaccines and autism, and the American Academy of Pediatrics criticized the statements about vaccination schedules at that Republican debate.

Stein also gave an out-of-the-mainstream answer in response to a question about wireless Internet in schools.

"We Should Not Be Subjecting Children's Brains To Wi-Fi Screens In Schools. It's Not OK "Jill Stein 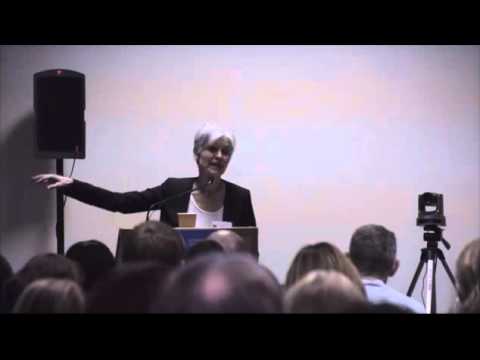 “We should not be subjecting kids’ brains especially to that,” Stein said in March during a question-and-answer session. “We don’t follow that issue in this country, but in Europe, where they do, they have good precautions around wireless, maybe not good enough.”

Concerns about wireless signal, including cell phones and Wi-Fi, have abounded, leading the World Health Organization to address “anxiety” around electromagnetic fields of various frequencies. With regard to wireless networks, the WHO said, “no adverse health effects are expected from exposure to them.”

Stein’s concern also appears to be in conflict with the Green Party platform, which calls for universal access to broadband Internet. If achieved, this policy would increase wireless Internet signal. Stein denied the conflict and on Wednesday said “access to information is a human right, and that includes access to broadband internet.”

Stein added she was responding to the person’s concerns and “agreed that more research is needed.”

“Scientists don’t know for sure if these technologies are safe for children, and as a doctor, I’d rather take precautions until the research is more conclusive,” Stein said.

She also noted a study released in May testing the link in rodents between cancer and constant exposure to low-level radiation.

Stein has called for a moratorium on GMOs and pesticides in the United States. Many in progressive circles, including sitting members of Congress, have also called GMOs into question. One target in particular has been the agribusiness giant Monsanto.

Asked about her moratorium and scientists who say there are not health concerns about GMOs, Stein said her concerns had not yet been allayed by existing studies.

“The absence of proof is not the proof of absence. And I can tell you as a physician with special interest and long history in environmental health, the quality of studies that we have are not what you need,” Stein said to WBUR. “We should have a moratorium until they are proven safe, and they have not been proven safe in the way that they are used.”

She added that pesticide-resistant GMOs were “not sustainable” and “not good for the farmers.”

GMOs exist for a variety of reasons, including profit for the businesses that design them, but they also have meant the existence of more durable crops the world over.

Furthermore, GMO products have become a major component of US agriculture, and a complete stop to their production would mean a government-enforced upheaval in US food production.

“My big concern with GMOs has been their increased use to push toxic pesticides and increase profits of agribusiness and chemical companies,” Stein tweeted in late July.

My big concern with GMOs has been their increased use to push toxic pesticides and increase profits of agribusiness and chemical companies.

She also called the notion that GMO’s are needed to end world hunger a “myth.”

Citing Organicconsumers.org on Sunday, she said, “The prime purpose of GMOs has been to increase pesticide use and corporate control of our food system.”

The prime purpose of #GMOs has been to increase pesticide use and corporate control of our food system. https://t.co/vArNnf7bf1

Stein clarified her GMO moratorium proposal, telling CNN Wednesday that it would apply to “new genetically modified organisms being introduced into our ecosystems, including our agricultural system and our food supply, until independent research free from industry influence shows decisively that GMOs are not harmful to human health or to the health of our ecosystems and that they are necessary.”

She also said the US should “phase out” GMO foods currently being grown.

Stein warned about herbicide-resistant GMO crops leading to overzealous use of dangerous herbicides, calling Monsanto’s Roundup Ready foods “a prime example” of her concern and citing a 2013 study contrasting Roundup Ready soy to an organic variety.

The third party candidate further warned about potential human health risks and cited an editorial from the New England Journal of Medicine as well as an eight-point argument from the Union of Concerned Scientists against Monstanto’s influence in the industry.

Since their introduction into the global food supply, GMOs have been a source of controversy, especially on the left. GMO labeling has even risen to become a national issue.