The pair have been tweeting each other

Her crush is well documented

Looks like Simone Biles has taken a leap into Zac Efron’s heart.

The Olympic gymnast’s crush on the actor is well documented and it looks like he also admires her.

Here’s a bit of the pair’s history: Biles let it be known way back in 2013 on Twitter that she thought Efron was bae.

On Christmas Day 2014 she received a life sized cutout of the star which she promptly tweeted along with a photo of her nuzzling said cutout.

But the adorable was just beginning.

Biles went on the “Ellen Show” in March and talked about her crush. Ellen DeGeneres gifted her with a sparkly leotard covered with Efron’s face. 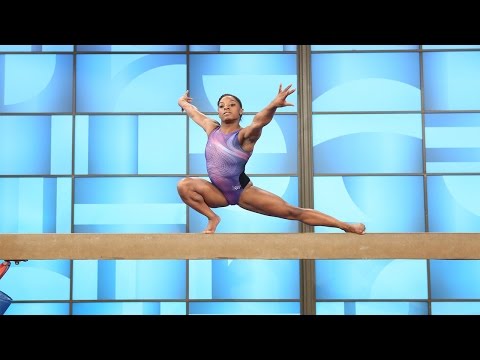 CAN I PLS PLS WEAR MY ZAC EFRON LEO TO P&G's @ZacEfron ❤️😂 thanks @TheEllenShow for having me! pic.twitter.com/h8TmhoQqh7

Then Efron tweeted her in July wishing her good luck on the Olympic trials. Biles couldn’t even.

OH MY GOSH I THINK I AM GOING TO PASS OUT OH MY GOSH CRYING! THANK YOU 😊

Efron again offered support on August 8 when he tweeted “So phenomenal a skill’s named after her. Congrats on sticking the Biles and qualifying for the finals @Simone_Biles!”

Thanks Zac! I hope you can watch Team Final tomorrow night.

The best was yet to come, however, as Efron tweeted a pic of him making a heart with his hands in front of a still of the US women’s gymnastic team captioned “Of course I’m watching the the #FinalFive dominate the floor!”

We imagine that Biles, who told NBC she used to kiss her Efron cutout on the cheek, flipped.

So, now that the 19-year-old athlete has landed the attention of her crush, where does it go from here?

We’ve got some suggestions for the teen to get a face to face with Efron:

Get Ellen to hook up a meeting

The talk show host is already a fan and introducing the pair on her show feels like ratings gold waiting to happen.

Invite him to a practice

Efron, 28, knows all about gymnastics having split not very long ago with his girlfriend of two years, Sami Miró, who was a former gymnast.

Surely someone wants to throw Biles a party to celebrate her amazing achievements in Rio? And if said person just happened to invite Efron, we promise she would not be mad.

He’ll need a date to his ‘Baywatch’ premiere

Ahem. Hint, hint. The movie comes out in May 2017, but it’s never too early to start planting a seed.

Not that we are advocating for a BEfron or SiZac super couple, but with all the hard work she put into her Olympic dreams, surely Biles has earned another dream come true.