The chemistry association said it anticipated the interest and the controversy

The new product Holmes introduced is a kind of miniature lab

The American Association of Clinical Chemistry has one of the more popular professional conventions in the science world, but when security had to scold a scientist for running to get one of the limited number of seats for a presentation, it may have been an association first.

Members waited in the lobby of the Philadelphia convention center Monday for an hour and a half to see Elizabeth Holmes. The CEO of the controversial biotech startup Theranos was going to present her ideas at this conference. It, too, was a first.

Theranos' Holmes on the rise, fall and maybe rise again of a medical tech darling

The Silicon Valley startup has been much maligned by the scientific community for its secretive 13-year history.

Unlike other startups, the company hasn’t tested out its work in peer-reviewed journals, nor has Theranos presented research at conferences. But now, the woman Forbes once estimated was worth $4.5 billion felt it was time to “start a new chapter.”

Launching Theranos’ latest project at the AACC was not without controversy. Leading up to the event, attendees complained in print and to the association that the AACC stage was no place for a lab owner operating under a regulatory cloud.

“It is very, very competitive to present at this conference and some members are upset that Elizabeth Holmes was given carte blanche,” said Dr. Eleftherios Diamandis, a division head of clinical biochemistry at Mount Sinai Hospital in Toronto. “There are thousands of owners who are in good standing that could be better.”

The company does face serious challenges with government investigations, at least a dozen lawsuits, and it lost its main retail partner, Walgreens. It was also the target of a high-profile investigation by the Wall Street Journal.

Then, in July, a Centers for Medicaid and Medicare Services investigation into the company’s Newark, California, lab, declared the work there “of immediate jeopardy to patient health and safety.” Theranos was forced to void two years of lab results.

Regulators revoked that lab’s license and legally banned Holmes from owning or operating a lab for two years. (The company can appeal that decision, which would go into effect in early September.)

“If I were her, after all that had happened with her lab, I would not show up,” Diamandis said.

But Holmes did show, and when the doors finally opened, the black-shirted security had to direct traffic like they were bringing planes into gates at a busy airport. There was so much curiosity, organizers encouraged the overflow crowd to watch it in one of its five satellite feed rooms. Music played as everyone took they seats, including “Sympathy for the Devil” by the Rolling Stones, which caught the attention of others given the atmosphere in the room.

Patricia Jones, the president of the AACC, introduced Holmes by acknowledging the interest and the controversy. She also laid out the ground rules.

Jones, a professor of pathology and medical laboratory science at UT Southwestern Medical Center, explained that the audience could submit questions but they absolutely must be “relevant to the science presented during this session.” 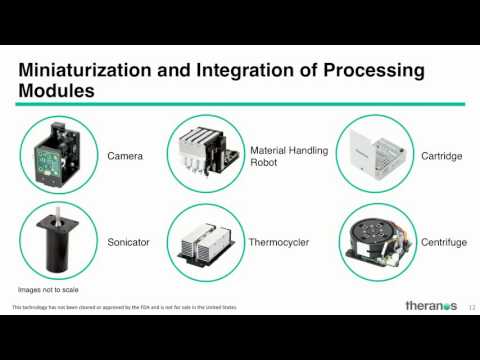 When Jones added “we’re all aware that there have been some questions about whether we will see any science here today and the viability of Theranos technology,” a Theranos public relations person visibly shuddered.

Holmes seemed calm as she walked out from behind a heavy blue curtain to the podium. Her dance walk-on music was much more enthusiastic than the polite applause.

Holmes thanked the crowd and explained this was the first time Theranos would present this new technology in such a forum.

Before going into detail, Holmes said that “we take full responsibility for our lab operations and we’re working diligently to rectify all our outstanding issues” at its Newark, California, lab.

She then launched into a highly technical presentation of Theranos’ newest invention.

The new technology is a mini lab the size of a placemat that could be put in a doctor’s office or in some remote location like in the field or even potentially in your home. Currently, such technology would take up an entire room.

Theranos founder: From billionaire to 'nothing'

Theranos engineers have been able to integrate several detection and processing systems into a single platform. The key to keeping it small is a miniature robotics system. With all these different testing mechanisms, it could count the number of red blood cells in a particular volume of blood, or it could look for disease like Zika. A software system could control the platform and either communicate with licensed professionals elsewhere or direct the machine to execute a particular test.

When Holmes showed the video of the machine at work, a couple dozen scientists held up their phones high above their heads recording video as if they were at a rock concert.

Throughout the presentation, Holmes mentioned how she looked forward to “working with all of you in validating” the data.

When Holmes finished her speech, the moderator congratulated her. Jones then asked the first question, one that was on many people’s minds.

What researches want to know

Was there enough data to prove the new technology would work?

Holmes said it was early.

The next question came with a more aggressive tone. Dr. Stephen Master, an associate professor of pathology and laboratory medicine at Weill Cornell Medical College said the reason there were so many people there and the interest came from “these claims that you have made that were very broad early on” but “the evidence you’ve presented fall short of that. So how should we think about that?” His tone and question got a smattering of spontaneous applause.

Holmes said she chose the meeting specifically to be transparent about the work and get feedback.”We have a lot of work to do to engage with this community,” she said. “I wish I had started earlier.”

The clapping at the end of Holmes’ session was much more enthusiastic than at its start and Jones said some of her members did come up and apologize to her as they saw why the AACC was the appropriate forum to discuss the new work after all.

What we know (and mostly don't) about the science behind Theranos

But the broader feeling seemed to be that there was not enough there. Some of the crowd lingered after the session to discuss the ideas with their peers.

“The failing here is to show up without enough data to show that the technology works. It might be enough for a poster session, but not this,” said Joshua Hayden at Weill Cornell Medicine, who works with one of the moderators at the conference session. “This industry is hungry for new ideas, we want disruptive technology in this field. But this doesn’t seem to be it so far, and most of us don’t like all the smoke and mirrors they’ve used over the years.”

About the product itself, Jones said the technology is and isn’t disruptive. The basic technology Theranos is using is pretty much the same as what’s available in the lab now. But, this has the “incredible job of miniaturization” and the potential to be able to run tests on samples that are far away, which has “immense potential.”

Some scientists gave her more props after listening to her speech.

“I do give her some credit for being here,” said Livio Valenti, who works with a startup in Cambridge, Massachusetts. He remains interested in Theranos’ work, but feels the presentation fell short.

“People were expecting to hear data, but there wasn’t enough to meet with the healthy skepticism that is out there right now,” Valenti said.

After the Holmes talk, Jones, the association president, said the increased media attention and the uncertainty about what Holmes would say, coupled with the uncertainty of how the audience might “over-react,” made her “tense all day.”

But when the session was over Jones said she felt good about her decision to extend the invitation to speak. She added that she was a skeptic herself, “simply because they were so secretive” all these years.

“I would say this is a good start,” Jones said. “There’s still a lot more data that they have to publish to convince everybody of everything they have.”