World has had 14 straight months of record-breaking hot temperatures: NOAA

The first six months of 2016 were the hottest ever recorded, NASA announced on Tuesday, while Arctic sea ice now covers 40% less of the Earth than it did just 30 years ago.

Temperatures were on average 1.3 degrees Celsius (2.4 degrees Fahrenheit) higher than average between January and June this year, compared to the late nineteenth century.

In total, the planet has now had 14 consecutive months of the hottest temperatures seen since records began in 1880, the U.S. National Oceanic and Atmospheric Administration (NOAA) said.

Australia, the United Kingdom, Hong Kong and Spain were some examples of places where temperatures soared more than a degree above average, as New Zealand had its hottest January to June period since records began. 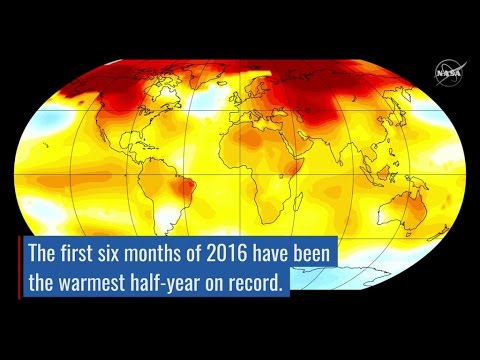 Sea ice shrunk faster than normal as five out of the six first months of 2016 saw the smallest respective monthly Arctic sea ice extent since satellite records started in 1979.

“It has been a record year so far for global temperatures, but the record high temperatures in the Arctic over the past six months have been even more extreme,” NASA Goddard sea ice scientist Walt Meier said in a statement.

“This warmth as well as unusual weather patterns have led to the record low sea ice extents so far this year.”

The strong El Nino pattern which began in 2015 could not be held entirely to blame, NASA Goddard Institute for Space Studies director Gavin Schmidt said in a statement, as it had already begun to fade by June.

“It is the underlying trend which is producing these record numbers,” Schmidt said.

Many scientists blame the increase in global temperatures on an increased concentration of carbon dioxides in the atmosphere, which surpassed 400 parts per million in May at the South pole.

The increase in carbon dioxide has come partly from burning fossil fuels, and has surpassed historic highs in the past decades according to NASA.