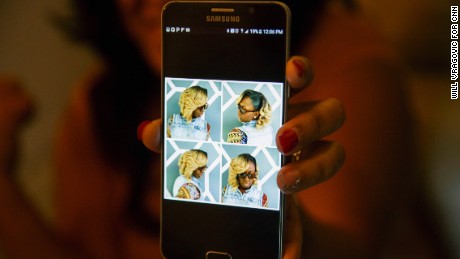 John D. Sutter is a columnist for CNN Opinion who focuses on climate change and social justice. Follow him on Snapchat, Facebook and email. The opinions expressed in this commentary are his. This column contains offensive language.

Tampa, Florida (CNN)India Clarke was a teenager when she got the tattoo near the corner of her eye. The image was so faint, blue ink on black skin, that her family barely could make it out at first. It was a symbol of metamorphosis. "She said butterflies are always flying away, always free," a friend of hers told me. And this butterfly hinted at life beyond her body.

Back then, India was a recent high school graduate from Tampa, Florida. She wore a black tux and shiny green vest to prom. She played high school football, posing for a team photo wearing twisty braids and a goofy smile. Only later would she tell her father she played the sport simply to try to impress him -- that all she really wanted was to be a cheerleader.
This was 2008 or so, a time when everyone called India Clarke by the name her mother, Thelma Clarke, had given the child at birth: Samuel Elijah Clarke, or Sammy.
It was her father's name -- given to a "miracle baby." Thelma Clarke told me she'd had her tubes tied before becoming pregnant with India. Yet somehow her daughter struggled into the womb and lived. It was like she "was supposed to be here," Thelma Clarke said.
From that beginning, it was a life that never would be easy.
Thelma Clarke, left, and her husband, Samuel, at their home in Tampa, Florida.
Read More
About 18 years later, that butterfly tattoo, so faint on her face, so mysterious to those around her, would start to make visible something India had been trying to hide: She was a young woman trapped in a body others saw as male. It always had been that way. At a young age, the child known as Sammy wanted to play with dolls, not trucks. In middle school, a sister, Brittany Shellman, saw her sibling fit a grocery bag to her chest like it was a halter top.
Back then, it didn't make sense to the family.
India struggled with this reality as well.
Friends told me she used to beg God for it to be any other way.
"I would say, 'You can't rush it,'" Quantisha Henley told me, referring to India's transition. "She was like, 'Friend, I'm a girl. If I could find whatever switch to turn it off I would, but I can't.'"
"This is in me," she told Henley. "I was born like this."
India Clarke's metamorphosis, like those of so many transgender people, should have been cause for celebration. She was blossoming into a vibrant young woman. She showered friends and family with "I love yous" as if they were confetti. She lip synced to tough female rappers like Nicki Minaj and Trina, loved doing hair and dreamed of working in a salon with her mother and cousin. Her anime eyes and cutting wit wowed friends and strangers alike.
But India Clarke wasn't always celebrated -- not in life.
Her death would come far too soon.

'You can say her name all day'

After India's body was found here in Tampa on July 21, 2015, it didn't take long for the outrage to swell in certain corners of America. Celebrities, including Laverne Cox, the transgender actress known for her role on "Orange is the New Black," and who India's friends say she idolized, launched a social media campaign asking all of us to #SayHerName.
"[T]his week the 10th Trans Woman of Color to be lynched this year was found ... in Tampa FL," Cox wrote on Instagram on July 22, 2015. "She was only 25 years old and clearly into all things beauty hair and makeup just like me. I can't help but feel like I'm next. That's why I do the work I do because the [average] life expectancy for someone like me is only 35 years old."
"We must #SayHerName," the actress wrote. "#IndiaClarke."
Nearly one year after India's death, friends and family still ache from her absence, their eyes welling with memories of a person who was both life of the party and a confidante, both sassy queen and a doting aunt. "I just wish my baby was here with me," her mother told me. "Every day, a part of me is gone. I am not the same. I know life still goes on, and I'm trying to make the best of it, but I miss my baby. I know my kids love me, but India showed the most love. Not only to me, to everybody ... she was always telling me, 'Momma, I love you.'"
India's killer "really took someone special from us, you know?" said India's cousin, Lakischa Hicks. "People can say, 'I love you,' but showing someone you love them is different. [India] always did that."
India Clarke's body was found in this park in July 2015.
The rest of us, however, have forgotten her.
I attended a recent LGBT pride parade in St. Petersburg, Florida, across the bay from Tampa. No one carried a sign bearing the words "India Clarke." While some people did remember India and told me they were moved by her death, many LGBT people, including a few transgender women, told me they didn't recognize her name or story. The pride parade opened appropriately with people carrying the names of 49 people killed in the June 12 massacre at a gay club in Orlando, which is about 1½ hours by car from Tampa. But the name of India Clarke, hometown girl, killed at age 25 apparently for being who she was, was absent.
Signs at the playground where her body was found don't mention her.
"No Bicycles, No Alcohol, No Soliciting."
Her grave in Tampa is yet to get a headstone.
Yes, there was an arrest in the case.
But these deaths are far too familiar.
LGBT Americans are "far more likely" to be the victims of hate crimes than any other minority group, according to the Southern Poverty Law Center. The nonprofit organization analyzed data from 1995 to 2008 and found LGBT people are more than twice as likely to be attacked as Jews and African-Americans, with Jews being the second most likely group to be victims of violent hate crimes. LGBT people are more than four times as likely as Muslims to be targeted, and have nearly 14 times the risk of Latinos. In 2014, the most recent year for which data is available, the rate of hate crimes against LGBT people remained about twice that of those against African-Americans, according to an analysis by The New York Times.
In other words: This was happening, with little alarm, before Orlando.
Transgender people, especially black transgender women like India Clarke, are at particular risk for violence. Between 2013 and 2015, the year of India's killing, at least 53 transgender people were killed in the United States, according to a report from the Human Rights Campaign and the Trans People of Color Coalition. Forty-six were transgender women, and 46 were transgender people of color. A congressional task force has called this underreported trend an "epidemic of violence." And LGBT advocates named November 20 Transgender Day of Remembrance in an attempt to sear the names of the fallen into our brains.
It's critical to remember the names of the dead, but that's not why I'm telling you India Clarke's story. Frankly, that's not why her friends were so passionate about sharing it, either.
"You can say her name all day and that's not going to change anything," India's friend Charles "Rainbow" Thomas, 31, told me on my visit to Tampa.
Our collective amnesia is sad.
What's tragic is that India Clarke is dead.
And that prejudice helped kill her.

India Clarke's metamorphosis began slowly.
Her friend Mimi Davis was there to watch it firsthand.
The two friends would try on dresses in Davis' apartment, or they'd go driving around Tampa dressed as women. Davis, 26 and also transgender, said they never had to explain themselves to one another, which was rare. "It's a silent truth we had between each other," Davis said.
They experimented with being themselves in public -- at first only at night, feeling safe under the cover of darkness. Getting ready was a frenzied affair. India loved MAC brand makeup, and she applied it with such tornadic enthusiasm that it coated bathroom sinks and walls. "She would not go out that door without her MAC," said Henley, a friend who met India shortly before she came out as transgender. "She would lose her mind without that MAC."
Photos: Meet India Clarke
India Clarke dreamed of being a hairdresser like her mother and cousin.
Hide Caption
1 of 8
Photos: Meet India Clarke
India was given the name Samuel at birth. Her mother, Thelma Clarke, called her a "miracle baby."
Hide Caption
<div class="el__g