Instead, police body camera footage shows him collapsing outside an Avon, Ohio, hotel, after officers charged at him with guns raised and handcuffed him.

They were responding to a false report that Al Menhali, dressed head-to-toe in traditional Arabian thobe, pledged allegiance to ISIS in a phone call from the Fairfield Inn & Suites lobby.

It quickly became an international incident.

The UAE’s Ministry of Foreign Affairs and International Cooperation called for an apology from Avon officials and warned citizens against wearing national dress when traveling to the United States.

Avon’s mayor and police chief apologized to Al Menhali on Saturday in a meeting in the Cleveland office of the Council on American-Islamic Relations. Mayor Bryan K. Jensen released a statement after the meeting, saying officers followed standard department protocol based on the information they had at the time.

“As soon as the facts became clear our officers apologized to Mr. Al Menhali and released him,” Jensen said in the statement. “This was a very unfortunate incident and does not reflect our community. Avon is proud to welcome visitors from the United Arab Emirates and other countries who regularly come to Northern Ohio for tourism, business, medical care of education.”

Al Menhali said he is grateful for the apology but it’s not enough. He wants those responsible for the 911 call to be held accountable. And, he hopes the police department will use it as a teachable moment in cross-cultural encounters.

TSA official says he was instructed to racially profile Somali-Americans

“Ahmed greatly appreciates the overture by coming to meet him on a holiday weekend. He appreciates their sincere apology, this is a positive and very important first step,” a translator said on his behalf.

“However, he still has a lot of unanswered questions and concerns [as] to how this could have happened in the first place.”

A woman said she was calling on behalf of her sister, a desk clerk at the Fairfield Inn & Suites. The woman said her sister called her and told her there was a man in the hotel lobby “in full headdress with multiple disposable phones pledging his allegiance to ISIS,” the news release said.

Meanwhile, another 911 call came in from the desk worker’s father requesting assistance on behalf of her daughter for the same reason. He said she was “terrified” and hiding “in the back.”

As they approached, his first instinct was to follow their orders, Al Menhali told CNN through a translator.

'I am you:' American Muslims on faith -- and fear

He had no idea what was going on; maybe something was wrong in the hotel, he thought to himself, and they were coming to help him.

As they got closer and Al Menhali saw their “vicious eyes,” he realized he was the target, he said through his translator.

The clerk was right about one thing: Al Menhali had two phones that he was using to find a place to stay in Cleveland, said Julia Shearson, executive director of CAIR Cleveland.

Chertoff on profiling Muslims as terrorists

Al Menhali, who owns a marketing company in the UAE, has been in the United States on a tourist visa since April for treatment at the Cleveland Clinic for several medical conditions, Shearson said.

He had been renting an apartment in Lakewood. His landlord asked him to find alternate accommodations during the week of the Republican National Convention so the RNC could use the apartment. He went to the nearby Fairfield and asked the desk clerk for recommendations for extended stay hotels. The manager came out front to help while the desk clerk went to the back office, Shearson said.

Al Menhali took a seat in the lobby and waited for them to print a list. As he continued to wait, he stepped outside the hotel just as police showed up.

“The only behavior that was unusual was the clerk’s, not Ahmed,” Shearson told CNN. “It’s the lack of cultural education.”

Opinion: Why American Muslims should look beyond the White House

Officers approached Al Menhali with guns drawn, the police news release said. Body camera video worn by one of the officers showed at least one of them carrying an assault rifle as they shouted orders at him to get down and drop his phone.

The video shows Al Menhali complying, sinking to his knees in a position resembling a prayer pose as officers approached.

While officers handcuffed him and removed his wallet, others made contact with the desk clerk and determined Al Menhali had not made statements related to ISIS, the police statement said.

“It was evident to the responding officers that there was a clear miscommunication between the desk clerk and her relatives,” the statement said. 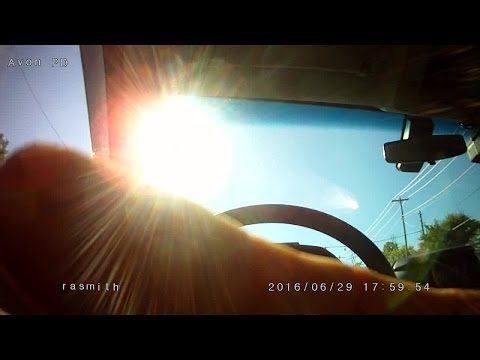 After a few minutes, the video shows him collapsing to the ground. A paramedic who had been called to treat the desk worker for a panic attack tends to him, according to the police statement.

Moments later, the video shows paramedics lifting him onto a cot and wheeling him into an ambulance.

He suffered a “light stroke,” and was hospitalized until Saturday, translator Ahmed Ali said.

‘This was a terrible misunderstanding’

A spokesman for Marriott International, which owns Fairfield Inn & Suites, expressed regret over the incident and said the company is working with Avon hotel staff on training to prevent a similar situation.

“This was a terrible misunderstanding and we deeply regret what happened to Mr. Al Menhali,” said Jeff Flaherty, senior director of global crisis communications and corporate affairs.

“Diversity and inclusion is a core principle of Marriott’s operations and we remain committed to providing a welcoming environment. We have been in regular contact with the hotel since the incident and we will be following up to discuss diversity and inclusion training designed to help prevent this type of situation. “

‘False accusations’ were made’

Shearson commended Avon city officials for not backing down from the situation.

“We commend City of Avon officials for taking an important step toward helping to resolve this matter. Instead of retreating behind a wall of silence, they came forward swiftly to unequivocally exonerate Mr. Al Menhali, which is extremely important in restoring his dignity and reputation,” Shearson said.

“We appreciate the transparency and forthrightness of these officials and hope they will pursue this matter in terms of seeking justice for Mr. Al Menhali through the office of the prosecutor.”

The police department is reviewing the case to determine whether to pursue charges against the 911 callers, the mayor said in his statement. The department also is reviewing its 911 protocol to see whether changes are warranted.

Al Menhali is back in his Lakewood apartment, where he received a warm welcome on Saturday from neighbors, Shearson said.

Despite the incident, Al Menhali still loves America, his interpreter said. He hopes to be a contributing member of the community during the remainder of his stay.

“He will do his best to help this country, American or not.”