Prophets of Rage’s Tom Morello: Why Trump, Sanders are not truly anti-establishment

Morello formed "Prophets of Rage" to empower the people

But to the Rage Against the Machine guitarist, neither Trump nor Sanders are the answer because the power lies with the people.

“One thing that we’ve seen in common with both the Trump campaign, elements of the Sanders campaign – from the Black Lives Matter movement to Occupy Wall Street from a few years ago – is that people believe that the system is corrupt, the system is irrevocably broken,” Morello told CNN. “The system cannot be fixed by the system. One way to fight back is via culture.”

Morello joined forces with Rage Against the Machine members Tim Commerford and Brad Wilk, DJ Lord and rappers Chuck D from Public Enemy and B-Real from Cypress Hill and formed Prophets of Rage – a rock and hip-hop supergroup that is kicking off a national “Make America Rage Again” tour on the second day of the Republican National Convention in Cleveland, in July.

The group is not an invited guest at the GOP gathering, but they will be performing on streets and in concert venues nearby. And while they do not have plans to perform near the Democratic National Convention in Philadelphia this July, Morello said that Prophets of Rage will ensure that their voice is heard there as well and are not letting Democrats get “off the hook.”

“In this election year where I’ve heard so many commentators say that Donald Trump, Bernie Sanders are raging against the machine, the architects of the real Rage Against the Machine had to step up and say ‘We’re gonna show you how to do it right,’” Morello said.

Morello, who recently knocked Trump as a “racist demagogue and called Sanders a “dreamer,” said that while presumptive Democratic nominee Hillary Clinton is “the lesser of two evils,” she supported policies that led to a “horrific quagmire” in the Middle East and is loyal to big money and Wall Street.

Is Donald Trump softening his tone?

But Morello reserved his strongest criticism for Trump, who is the target of the Prophets of Rage’s debut original song, “The Party is Over.”

Trump is “particularity dangerous” because he is telling Americans that immigrants are to blame for their problems Morello said.

While Trump supporters have “legitimate grievances about American jobs being sent overseas, about declining standard of living, about Wall Street controlling Washington,” Morello said, the billionaire’s solutions to solving these issues are “un-American.”

Prophets Of Rage - Killing In The Name (Live) 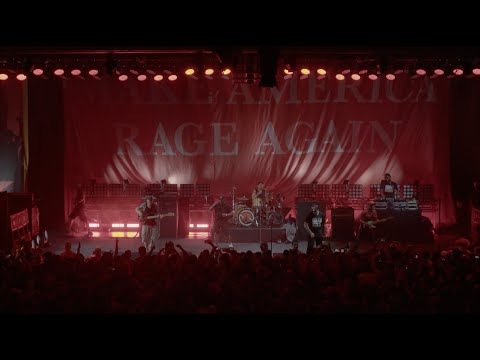 “He’s basically calling for ethnic cleansing,” the guitarist added, slamming Trump’s proposal to ban Muslims from entering the U.S. and his proposal to deport undocumented immigrants and build a wall across the U.S.-Mexico border.

While Morello’s politics are closer to the progressive views of a candidate like Sanders, Morello said that Sanders’ attempt to turn the Democratic Party from a corporate party to the people’s party failed because true change can’t happen from the top.

CHECK OUT: #GetPolitical — Where music, art and politics meet

“The message behind Prophets of Rage and the Make America Rage Again tour is that it’s not enough to just cast your ballots into the void every four years,” Morello said, adding that “progressive, radical or even revolutionary change” can only happen when ordinary people fight “before, during and after Election Day.”

Prophets of Rage, which is named after a Public Enemy song, will be taking their message across the country. Some of the proceeds will be going to local homeless shelters and food banks to highlight the group’s message on economic inequality. Tickets are set at $20 to ensure that fans from various economic levels can attend.

“The mosh pit is the message. We come together in a community at these shows,” Morello said. “We come to rock like crazy. We come to get funky as hell. At the end of the day there’s an underlying message that is one that resonates beyond the hall once the amplifiers are shut off.”