Police: Man pelted car with rocks in a domestic dispute

Man was shot by police, remains in stable condition at a hospital

Officers shot a man involved in a domestic disturbance outside the Dallas Love Field airport terminal after he rushed one of them, police said Friday.

A man was throwing rocks at his ex-girlfriend’s car outside the baggage claim area after she tried to drop him off at the airport, Dallas Police Chief David Brown said in a news conference.

The man was holding a rock in both of his hands when an officer responded to the scene, he said. Video footage released by the airport showed the officer retreating while the man walked toward him.

The man was shot several times after he rushed the officer, police said. He was taken to a local hospital, where he is in stable condition, Brown said. The police chief defended the tactics used by the officer as “quite appropriate” and said the surveillance footage told the story.

The woman was not injured in the incident that briefly snarled the airport Friday.

How the incident unfolded

The incident at the airport started after the pair pulled up to the curb outside the baggage claim doors around noon.

Earlier this week, the man had arrived from Maryland to see his ex-girlfriend, who is the mother of his children. The woman had become fearful of him and had agreed to take him to the airport so he could fly back to Maryland, according to police. The woman told police that her ex-boyfriend had “become angry and struck her” earlier in the day, Brown said. 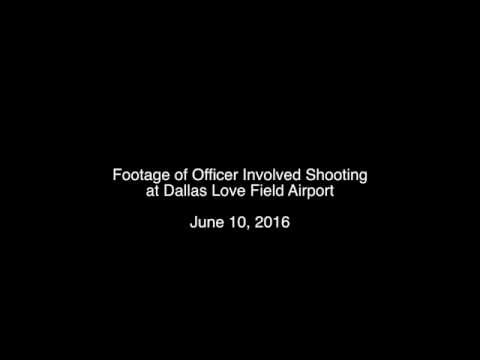 The surveillance footage released by Love Field Airport Police showed the woman pulling up to the airport curb. She removed several pieces of luggage from the car. About a minute into the video, the man stepped out of the passenger’s seat.

They appeared to exchange a few words after which the woman grabbed clothing from the back seat of the car and flung them on the road.

The man then picked up a nearby traffic cone and hurled it repeatedly into the car windows. He began pelting the car with rocks that were part of the airport landscape. After initially attempting to stop the man from throwing the rocks, the woman walked off to the side of the road.

When police arrived, the man was holding at least one rock and walking toward the officer, who was retreating. The man headed towards the airport terminal as he faced two officers – one holding a gun and the other wielding a Taser.

The suspect made a “swift move to try to circle the officer,” Brown said. The officer fired shots and the man fell down. After being shot initially, the man got up again and “in response, the officer discharged his handgun several times,” Brown said.

Witness Bryan Armstrong said it appeared the man was approaching the officer with a large rock when he was shot.

The officer told the man to “drop the rock and stop walking,” but he continued to approach the officer slowly as people came through the terminal door unaware of what was happening, Armstrong told CNN.

Nine shots can be heard on a video Armstrong posted to Instagram. A woman is crying in the background of the video as someone screams, “Get down!”

After the sound of gunshots, a male voice can be heard shouting, “Stay down, stay down!”

The incident began at this car outside baggage claim, where the man used large landscaping rocks to break the windows, Dallas police said.
CNN

Brown said it was unclear at this time how many shots the officer fired.

Witnesses told police that they overheard the suspect telling the officer, “You’re going to have to shoot me.”

Disruptions to the airport

After the shooting, a big rock was still visible on the car’s hood and at least two were on the ground on the car’s left side. The driver’s side window and rear windshield were smashed in.

The airport remained open throughout the incident, though it did prompt security screening delays, said assistant Police Chief Randy Blankenbaker.

TSA Security Checkpoint has reopened for all departing flights. If you have a flight now, expect 3 hours in line. pic.twitter.com/qU1a5VpjYy

“During the shooting, we believe there were some folks in the security line who were startled, and so they went through the security line without being checked,” he said, “So the airport decided to pull everybody back out of the secure area and recheck them for security purposes.”

Within an hour, the airport tweeted that lines through security were “moving fast,” but there remained many departure delays.

CNN’s Ed Lavandera contributed to this report from Dallas.