Similar cases have been recorded in the past, but with very different outcomes

Zookeepers shot and killed a rare gorilla on Saturday after a 3-year-old boy slipped into its enclosure at the Cincinnati Zoo, triggering outcry over how the situation was handled.

If they had to do it again, they would respond the same way, the zoo’s director said Monday.

Cincinnati Zoo Director Thane Maynard said he stands by the decision to kill 17-year-old silverback Harambe to save the child. The boy went under a rail, through wires and over a moat wall to get into the enclosure, according to the zoo. Footage shot by a witness shows Harambe dragging the child through the water as the clamor of the crowd grows louder.

Zookeepers shot the 450-pound gorilla with a rifle, rather than tranquilizing him. The brief encounter sparked widespread Internet outrage over the decision to shoot Harambe and whether the child’s parents were to blame for failing to look after him.

But those second-guessing the call “don’t understand silverback gorillas,” Maynard said in a news conference. And, they were not there when it was time to make the crucial decision.

“That child’s life was in danger. People who question that don’t understand you can’t take a risk with a silverback gorilla – this is a dangerous animal,” he said. “Looking back, we’d make the same decision. The child is safe.”

‘We made a difficult call’

The family was visiting the zoo on Saturday when the boy slipped away and entered the enclosure. Kimberley Ann Perkins O’Connor, who captured part of the incident on her phone, told CNN she overheard the boy joking to his mother about going into the water. Then, suddenly, there he was, being dragged by Harambe.

The unidentified boy was taken to Children’s Hospital and released Saturday evening. The family thanked the zoo in a statement through a public relations firm:

“We are so thankful to the Lord that our child is safe. He is home and doing just fine. We extend our heartfelt thanks for the quick action by the Cincinnati Zoo staff. We know that this was a very difficult decision for them, and that they are grieving the loss of their gorilla. We hope that you will respect our privacy at this time.”

Some suggested the boy’s parents should be held criminally responsible for the incident. An online petition seeking “Justice for Harambe” earned more than 100,000 signatures in less than 48 hours.

“This beautiful gorilla lost his life because the boy’s parents did not keep a closer watch on the child,” the petition states.

If you leave your kid in a car you go to jail, if you let your kid fall into a Gorilla Enclosure u should too! #TeamDl

It seems that some gorillas make better parents than some people.

Cincinnati Police Lt. Stephen Saunders said he is “not aware of any intention to charge the mother” or “the parents” at this time.

Maynard refused to point fingers at the child’s family.

“We had a very difficult situation and we made a difficult call at the end. I’m not here to point fingers about fault,” he said.

He also defended the enclosure barriers, saying the zoo has been inspected by both the USDA and the Association of Zoos and Aquariums. He compared the scenario to a locked car that burglars find their way into if they try hard enough.

He also pointed out this was the first breach of the exhibit in 38 years of existence.

“The barriers are safe. They exceed any required protocols. The trouble with barriers, whatever the barrier is, some people get past it,” he said. “The zoo is not negligent.”

Western lowland gorillas are critically endangered in the wild, numbering fewer than 175,000, according to the zoo. An additional 765 gorillas dwell in zoos worldwide.

Moments later, Harambe was put down, a decision that left many wondering if the zoo was too quick to shoot.

Ian Redmond, chairman of The Gorilla Organization, said zookeepers had other options.

“I don’t know if that was tried or people thought there was too much danger but it does seem very unfortunate that a lethal shot was required.”

“… In some situations, depending on what the medication is, it can take upward to 10 to 15 minutes,” Corwin said. “It may take multiple shots.”

Many pointed out that a human life was at stake – especially that of a child – and that’s more important than that of a gorilla.

it was the best decision that guaranteed the safety of the kid. You really want to risk a human life for a gorilla ? Stop it.

Although it was the first incident of its kind at Cincinnati Zoo’s Gorilla World exhibit since it opened in 1978, similar cases have occurred with very different outcomes.

The boy fell into a warrior with gorillas, shock! 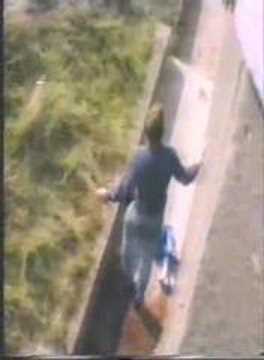 In 1986, a 5-year-old boy named Levan Merritt tumbled into the gorilla enclosure at Jersey Zoo in the United Kingdom. Video filmed by a bystander showed Levan lying on the ground, bleeding from the head and unconscious.

The footage shows Jambo, a male gorilla, approaching the boy as if to check on him, extending a hand to stroke his back. When Merritt comes to, wailing, Jambo, seemingly startled by the cries, sets off in a different direction. Zookeepers immediately move in to save the boy.

A decade later, a 3-year-old boy fell nearly 20 feet into the gorilla enclosure at the Brookfield Zoo in Chicago.

This time, a female gorilla named Binti Jua picked up the unconscious boy, while carrying her own infant on her back, and guarded him from other gorillas.

In an incredible show of maternal care, Binti took him right to a door so that zookeepers could retrieve him.

‘Not a good scene’

Although gorillas are known to be unpredictable – not always the gentle giants the world saw in these two cases – the animal advocacy group People for the Ethical Treatment of Animals said the larger concept of zoos is the root of the problem.

The animal rights organization said on Twitter the tragic episode was the latest proof that “even under the ‘best’ circumstances … captivity is never acceptable for gorillas or other primates.”

Others pointed out that in the end, the odds were stacked against the gorilla.

Humans imprison gorilla. Human enters gorilla prison. Gorilla gets shot dead for being near human. Humanity is a disease.

Maynard said the zoo plans to reopen the exhibit to the public after a thorough assessment.

“The exhibit will be completely safe when it reopens.”

CNN’s Sarah Jorgenson and AnneClaire Stapleton contributed to this report.