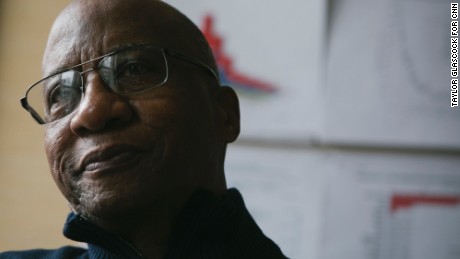 Chicago (CNN)Donald Hopkins keeps his enemy in plain sight. Henrietta sits on a bookshelf in the doctor's home office, coiled like a yard-long strand of spaghetti, in an alcohol-filled glass jar.

The dead Guinea worm has been there for most of Hopkins' tough slog against a disease that he is finally on the verge of vanquishing.
He doesn't know why he called her Henrietta except that he might have thought of a Dutch princess by that name. But Henrietta inspires Hopkins to soldier on. She reminds him of the resilience of people who have experienced the excruciating scourge of Guinea worm, a water-borne parasitic disease that culminates with milky white worms bursting from festering blisters on human skin.
Soon, Hopkins hopes, Henrietta will be the last of her kind.
"My passion," he says, lifting the jar off the shelf, "is to see the end of this worm."
Read More
It has been a passion, as well, for former President Jimmy Carter. Last August, when Carter announced to the world that he was battling brain cancer, he expressed this wish: "I hope Guinea worm dies before I do."
That wish may very well come true.
Carter has been declared cancer free. And Guinea worm cases now number 22, down from 3.5 million in 1986, when the Carter Center tapped Hopkins to lead the global eradication effort. Back then, Guinea worm terrorized people in 21 countries. Today, the remaining cases are limited to isolated parts of Chad, Mali, South Sudan and Ethiopia.
Guinea worm never commanded attention like malaria or polio. Perhaps that's because the disease -- aptly known in Latin as dracunculiasis or "little snake" -- was not indigenous to the West and mainly affects people in African and Asian nations with poor water sanitation. Perhaps it's also because Guinea worm is generally not a killer. It still can be devastating: It is so painful and disabling that it often keeps impoverished men and women from working for months or even years, and children from attending school.
"We've kept 80 million people from having Guinea worm, and now we are approaching the end of the process," Carter says. "I would say this is perhaps the most gratifying personal experience I have had in the so-called successes of my life."
For that reason, Carter calls Hopkins a hero.
Hopkins' quest to succeed began early in life. Few things faze him, and a pathological (that's the word his colleagues use) optimism has buoyed him through formidable challenges.
Hopkins keeps Henrietta on a shelf in his office. He hopes one day soon she will be the last Guinea worm on the planet.
But the disease doctor has learned to temper his excitement in what has been a long and weary fight against Guinea worm. Several target dates for eradication have come and gone and Hopkins knows that even now, on the precipice of victory, a setback could happen. All it takes is for one sick person to contaminate a water supply and an entire village can become infected.
"That's one of the things that keeps me up at night," Hopkins says. "The worm has a prolific reproductive cycle."
Hopkins, who will turn 75 this September, hopes he will be around to see the World Health Organization declare Guinea worm dead.
"God willing. I take great satisfaction in knowing that this worm will be gone."
And when it is, Hopkins, will be in a class of his own.
Eradicating an infectious disease is no small task. Only one other human disease has ever been stamped out: smallpox in 1980. Hopkins, who worked for many years at the Centers for Disease Control and Prevention, played a key role in that effort as well.
Now he stands to accomplish a public health feat as the man who killed two horrific diseases.

From Miami to Mali

On this wintry day in the Windy City, the white stuff is blowing sideways. Hopkins uses a broom to clear the wooden steps leading to his front door for his CNN visitors.
He moved here to be closer to his wife Ernestine's family and for a while commuted to work at the Carter Center in Atlanta. As the center's special adviser on Guinea worm, Hopkins, a 1995 MacArthur "genius" grant recipient, now wages war on the worm from a small office equipped with a laptop, a land line and a fax machine. He doesn't have a cell phone; nor does he care much for e-mail. He thought his pager annoying during his medical internship at San Francisco General, and his dislike for such devices has only grown. "Distractions," he calls them.
Hopkins' Victorian-era townhouse near Lincoln Park is embellished with things he's collected throughout his career. They add up, like pieces of a puzzle, to reveal a man of many distinctions: a black man who succeeded despite the obstacles of racial injustice. A man who delves deep into whatever captures his interest.
There's a small idol of Sitala Devi, the Hindu goddess who protects from smallpox, and an award plaque with pump handles on it in honor of John Snow, who traced a 19th century cholera outbreak in London to a single contaminated water pump and is considered the father of modern epidemiology.
Hopkins owns an old Brooklyn Dodgers pennant (because of barrier-breaker Jackie Robinson) and a Lion of Judah flag (because he was impressed with Ethiopian ruler Haile Selassie).
Hopkins clears the steps to his Victorian townhouse on a wintry Chicago day. He moved to the Windy City to be closer to family.
He framed a certificate of his 1998 knighthood in Mali. Among his many books is his own, "The Greatest Killer: Smallpox in History," which earned him a Pulitzer nomination. And on top of his bookshelf is a collection of blue bottles, most of them antique medical vials and one empty bottle of the Luna di Luna wine he shared with Ernestine on a vacation to one of their favorite spots, Martha's Vineyard. "I like the color blue," Hopkins says.
He also likes orchids. A customer on his childhood paper route brought back the delicate flowers from the Everglades, and Hopkins realized then that they were so much more than corsages. He wishes he could have a greenhouse at home to grow them in Chicago's weather.
But perhaps most striking are the myriad pictures and carvings of woodpeckers. His fondness for the birds began as a young boy when he glimpsed a pair of pileated woodpeckers the size of pigeons in an oak tree at his grandmother's house. He was taken by their red crests, unusual posture and loping flights.
Later, in Nigeria, Hopkins learned that the Yoruba concept of ashe, or the power to make things happen, was symbolized by a woodpecker. He recognizes exemplary work by his team members by sending notes rubber-stamped with a woodpecker image, a gesture coveted like a Nobel Prize at the Carter Center.
All these years later, Hopkins recognizes his fascination seems fitting: Woodpeckers are persistent at picking off worms.
Photographs of his parents and family hang in the hall outside his second-floor office. Hopkins traced the genealogy of his Bahamian ancestors and credits his parents for giving him the right start in life.
He was one of 10 children born to Joseph Leonard Hopkins, a carpenter who built three family homes, and Iva Louise Hopkins, a seamstress who made all her children's clothes. The family lived in the Bahamian section of Coconut Grove in Miami.
<div class="zn-body_