What was meant to be a fun day of riding roller coasters at the amusement park turned into a very scary ordeal for one family.

Delbert Latham and his 6-year-old son Kayson were on a roller coaster at Wonderland, an Amarillo, Texas amusement park, when Kayson’s seat belt came undone mid-ride.

Latham, who happened to be recording video to show his wife, captured the moment his son’s seat belt releases and Kaysen is thrown to the bottom of the cart.

He quickly grabs his son and clutches his son for the rest of the ride, while trying to reassure him: “You’re fine. I promise. I gotcha. There are no more big hills.”

Latham told CNN-affiliate KVII he notified the ride operator about what had happened but was angered by the response he received:

“What makes it worse is when I told the guy at the end of the ride he stated that he knew that had happened sometimes!!” he wrote in a Facebook post.

Latham said the operator allowed people to continue to ride but stopped people from riding in the backseat.

According to the park’s website, the ride measures 52 feet tall and is 1,710 feet long, featuring steep descents as can be seen in this Youtube video. It was manufactured by Pinfari in Italy. 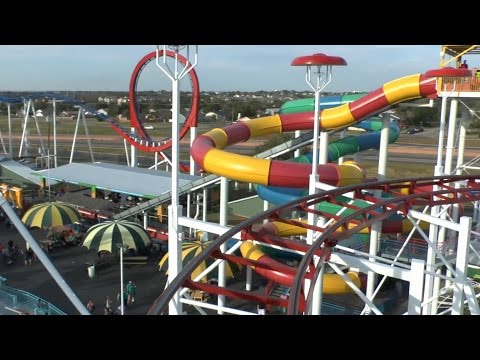 The park responded via a statement saying they “were extremely concerned to hear about the experience of Mr. Latham and his six-year-old son over the weekend.”

“Wonderland immediately reached back out to Mr. Latham the evening it happened and promptly removed the back car from service and ensured all other seat belts were in proper working order. The Mouse Trap was back in full operation on Saturday,” the statement said.

It added that safety inspections were conducted daily and the ride was initially built without seat belts but that the park installed it later as an additional safety measure.