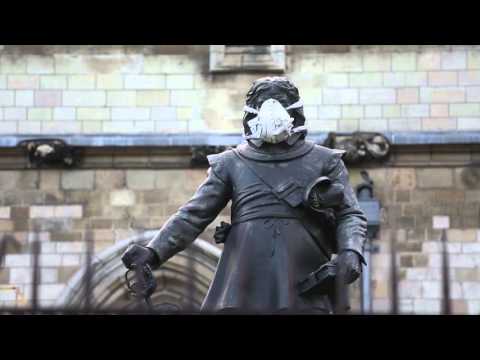 Campaigners scaled other statues around the city, including Winston Churchill in Parliament Square and footballer Thierry Henry outside Arsenal’s Emirates Stadium. Once at the top, they strapped imposing gas masks over their faces.

"Healthy citizens are the greatest asset any country can have" -Winston Churchill. That's why we need #CleanAirNow pic.twitter.com/IU7PW62MfS

“We wanted to draw attention to the air pollution problem because nearly 9,500 people a year are dying because of air pollution alone (in London),” Greenpeace campaigner Paul Morozzo, told CNN, who abseiled down the statue of Eros at Piccadilly Circus.

“Air pollution is an invisible problem and we wanted to make it visible before the mayoral elections (in May), because it’s important that the mayor puts it as one of their main things to deal with.”

Several parts of London used up their entire EU legal air pollution allowance in the first week of 2016, he says. London also has the highest levels of nitrogen dioxide of any capital city in Europe in 2010, according to Clear Air in London.

"Tact is the art of making a point without making an enemy" - Isaac Newton #CleanAirNow https://t.co/zKLja8UziK pic.twitter.com/JYPOtRxWRo

Eight people were arrested over the protests at Trafalgar Square, Parliament Square and Hyde Park Corner, Scotland Yard said. But Morozzo said that Greenpeace make it clear to police and the public ahead of the protest that it is a intervention by the organization.

In July 2013, Greenpeace activists scaled the Shard, one of Europe’s tallest buildings, to rally against Shell’s Arctic drilling plan.