Legislation would prohibit refusing service to someone based on gender identity

It probably wasn’t the reception Massachusetts Gov. Charlie Baker expected given that he was the featured speaker.

Baker, a Republican and a supporter of same-sex marriage, was booed off a stage Wednesday night at a Boston networking event for the LGBT community when he didn’t signal whether he’d sign a bill that supporters say would protect transgender people’s rights in public places.

Baker drew applause when he said no one should face discrimination. But it all went downhill when he said he’d “talk to all parties involved” should the bill arrive at his desk.

“Not good enough!” someone shouted, a YouTube video of the event shows. 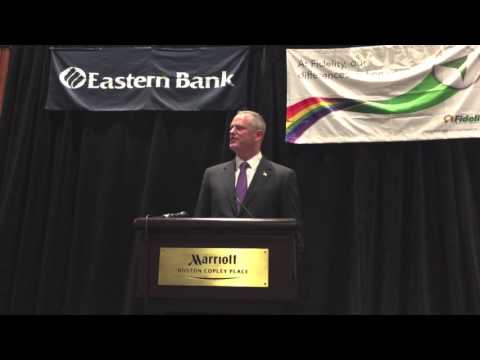 Baker encouraged the crowd to reach out to lawmakers with their stories and arguments – but that didn’t sit well, either.

As watchers interrupted to say they’ve already been doing that, Baker decided he’d had enough, picking up his papers, telling everybody to have a good night and exiting the stage.

A round of boos drowned out a few claps. People held signs that read “Public Spaces = Our Spaces” and “Trans Rights Now!”

Here’s what we know about the bill and other circumstances surrounding Wednesday’s event:

What the bill would do

The proposal, known in the state Legislature as House Bill 1577 and Senate Bill 735, would keep people from refusing service to someone based on a person’s gender identity. Among other things, it would allow people to use restrooms consistent with their gender identities, regardless of their sex at birth.

The bill would ensure any business that is open to the public would “grant all persons admission to and the full enjoyment of such public accommodation … consistent with the person’s gender identity.”

Baker defended himself Thursday. His main points: 1) He doesn’t comment on pending legislation any other time “for a lot of reasons,” so why would he now?; and 2) he re-emphasized he’s against discrimination.

Speaking to reporters Thursday morning, he also said he was invited to the event because he believes in and supports “many of the issues” that the lesbian, gay, bisexual and transgender community does.

Baker kept walking Wednesday night after he left the stage – he didn’t stay at the event and talk with attendees as organizers had hoped, CNN affiliate WCVB-TV in Boston reported.

Lizzy Guyton, Baker’s press secretary, said the governor looks forward to reviewing the legislation should it reach his desk.

“Gov. Baker concluded his speech where he reiterated his belief that no one in Massachusetts should be discriminated against, praised attendees for their courage and urged the transgender community to continue to advocate for their beliefs,” she said.