NEW: Protesters upset by the decision march and chant through Minneapolis

Protesters rallied and marched on the streets of Minneapolis on Wednesday after a prosecutor announced that officers involved in the shooting death of 24-year-old Jamar Clark would not face charges.

“Hey, hey, ho ho. These racist cops have got to go,” they chanted.

Clark was African-American; Mark Ringgenberg and Dustin Schwarze, the officers involved, are white.

Jamar Clark was 24 when he was fatally shot by a police officer.
WCCO

Schwarze shot Clark only after Ringgenberg scuffled with the young man, according to Hennepin County Attorney Mike Freeman. Clark took control of the officer’s gun, the prosecutor said, and Ringgenberg told Schwarze to open fire.

Investigators concluded the officers acted in self-defense, he said.

“(Schwarze’s) actions were reasonable given both his observations and Ringgenberg’s plea,” Freeman said.

“If the city burns down,” one woman shouted at Freeman, “it’s on your hands.”

Clark’s cousin, Cameron Clark, said Freeman’s version of what happened made no sense to him.

“I feel like the story is being made up, and it’s all lies,” he told CNN. “My cousin would never tell the cops to kill him,” referring to comments the officers said his cousin made during the encounter. “… His life was doing good. My cousin never told me he was ready to die.”

After the Freeman’s announcement, Clark supporters gathered near the street where he was shot. Protesters rallied later in the day, too.

Mayor Betsy Hodges said she supported the right of people to demonstrate peaceably.

“Today is a hard day for everyone in the city of Minneapolis,” she told reporters. “Many people are feeling hurt, anger, disappointment, frustration, mistrust in a system that has not worked for everyone. My heart breaks for the loss of Jamar Clark’s life and for the pain felt by everyone involved in this incident.”

Hodges said the shooting was still being investigated by the state as well as the U.S. Justice Department.

Harteau said the department was prepared for peaceful demonstrations but will “ensure public safety for every one – that includes protesters, bystanders and police officers.”

Freeman said he declined to present to the case to a grand jury so that his office could release all the reports related to the investigation. His office posted numerous investigative documents, photos and videos on its website.

The reports demonstrated that Clark had attacked his girlfriend, interfered with paramedics attempting to transport her to the hospital and refused officers’ demands to remove his hands from his pockets, Freeman said.

Ringgenberg and Schwarze then took Clark to the ground in an attempt to place handcuffs on him, but during the scuffle, Ringgenberg landed on top of Clark, who then went for that officer’s gun, the prosecutor said.

According to Freeman, Ringgenberg said when he felt his gun move from his right hip to the small of his back, he reached back to the top of his gun and felt Clark’s “whole” hand on the weapon.

The officer told his partner, “He’s got my gun,” Freeman said.

“Ringgenberg believed he was going to die … because he had no control over his gun,” Freeman said. “Ringgenberg felt that Clark didn’t care what happened to him and remembered thinking that he didn’t want his partner to die with his gun.”

Schwarze dropped the handcuffs and took out his gun, according to the prosecutor. Schwarze told investigators he put the gun to the edge of Clark’s mouth and said, “Let go or I’m gonna shoot you.”

Schwarze told investigators that Clark looked directly at him and said, “I’m ready to die.” Schwarze said the “only thing I could think of to do was to save our lives and anyone else in the immediate area so I pulled the trigger,” according to the prosecutor.

The gun did not fire because the slide was partially pulled back, Freeman said. Schwarze heard Ringgenberg saying, “Shoot him.”

Schwarze pulled the trigger again and fired, the prosecutor said. Clark was shot about 61 seconds after the officers first confronted him.

“At the time he was shot, Clark was attempting to gain control of Ringgenberg’s firearm. Ringgenberg reasonably believed that if Clark had succeeded in removing his firearm from his holster, Clark would have shot both officers as well as exposing third parties to danger of injury by firearm,” Freeman said.

Clark was shot on November 15. He died at a hospital a day later. His death led to widespread protests.

Five people were wounded in November when gunfire erupted near a Minneapolis police precinct where activists were demonstrating. Elsewhere, protesters stopped traffic on an interstate and disrupted travelers trying to get into an airport.

Several witnesses said Clark was restrained when a bullet struck him in the head. One witness told CNN he thought Clark was in handcuffs. Police and attorneys have disputed those allegations.

Freeman addressed the witnesses’ accounts during his Wednesday news conference, calling them conflicting. Of 20 witnesses, he said, two said Clark was not handcuffed, six said they were uncertain and 12 said he was handcuffed, though they disagreed on whether he was handcuffed with his hands in front of him, his hands behind him or only on his left hand.

Freeman said none of the witnesses reported hearing Clark say he was ready to die.

Forensic evidence further demonstrated that Clark had no wrist wounds that would have resulted from being handcuffed during the tussle, and blood found on the handcuffs suggests they were on the ground, not on Clark’s wrists, when he was shot, Freeman said.

Clark’s death is the latest in a string of controversial police killings that include those of Michael Brown in Ferguson, Missouri; Eric Garner in New York; and Freddie Gray in Baltimore.

Black Lives Matter started with a hashtag. Now it is a rallying cry, a cause and a movement in the wake of the deaths of black men at the hands of police. The latest police shootings of Alton Sterling and Philando Castile have spurred a new round of protests across the country and worldwide.
Andrew Burton/Getty Images
Some organizers say the acquittal of George Zimmerman in the death of Trayvon Martin in 2012 is where the movement began. Demonstrators wore hoodies and carried Skittles, the candy Martin had bought on the night he was killed.
Jessica McGowan/Getty Images
The shooting death of unarmed teen Michael Brown in August 2014 in Ferguson, Missouri, by an officer lit an existing fuse and protests engulfed the town.
Richard Perry/Pool/Getty Images
By the time Eric Garner died after being placed in a chokehold by a New York Police Department officer, support for Black Lives Matter had grown nationwide.
John Minchillo/AP
Protests and clashes with police after the officer wasn't indicted in the death of Michael Brown in Ferguson led to another round of protests, with the rallying cry "No justice, no peace."
Jahi Chikwendiu/The Washington Post via Getty Images
Demands for change led to organized protests in major cities, including New York, Washington, Boston, San Francisco and Oakland, California, in December 2014.
Kena Betancur/Getty Images
Activist Muhiyidin d'Baha took the call for action into a North Charleston, South Carolina, City Council after the killing of Walter Scott by a North Charleston police officer.
Chuck Burton/AP
The death of Freddie Gray in Baltimore led to frustrations that splintered into violence; a CVS Pharmacy was looted and burned during protests after his funeral.
Chip Somodevilla/Getty Images
A battle waged against the Confederate flag as a symbol of hatred after Dylann Roof was accused of killing nine people in a South Carolina church in an attempt to spark a race war. Activist Brittany "Bree" Newsome took the battle flag off the flagpole at the Statehouse in Columbia, South Carolina.
Adam Anderson/REUTERS/LANDOV
The political activism entered the 2016 campaign, with some parts of the movement deciding to interrupt presidential candidates to demand more be done.
Elaine Thompson/AP
Black Lives Matter demonstrators made a point of protesting Democratic events to bring attention to their issues. The group had a tense meeting with Hillary Clinton in New Hampshire and released video of the conversation.
GOOD Magazine
The movement also worked its way into popular culture, sparking an episode of "Law & Order: Special Victims Unit," which took on a police officer killing an innocent unarmed black man.
nbc
Black Lives Matter protesters continued to disrupt political events in an attempt to be heard, including this Hillary Clinton event in Atlanta.
Melina Mara/The Washington Post via Getty Images
Racial tensions led to a weekslong protest movement at the University of Missouri campus that ousted both the university president and the school's chancellor.
The Washington Post/Getty Images
The movement was born out of frustration over the death of young black men. Jamar Clark's funeral in Minneapolis in November is an example of that continued unified response.
Stephen Maturen/Getty Images
Black Lives Matter demonstrators march in Cleveland on December 29, 2015, after a grand jury declined to indict Cleveland Police officer Timothy Loehmann for the fatal shooting of Tamir Rice on November 22, 2014.
Angelo Merendino/Getty Images
Sirica Bolling raises her fist as she walks down Jefferson Avenue during a Black Lives Matter protest in Newport News, Va., Sunday July 10, 2016, following the fatal shootings of Alton Sterling in Louisiana and Philando Castile in Minnesota.
Aileen Devlin/AP
Demonstrations have popped up in cities around the world, including this one in London on July 10, 2016, following the most recent police shootings.
DANIEL LEAL-OLIVAS/AFP/Getty Images

The evolution of #BlackLivesMatter

Bracing for the possibility of more protests, Harteau released a message last week, warning activists and others that violence would not be tolerated. 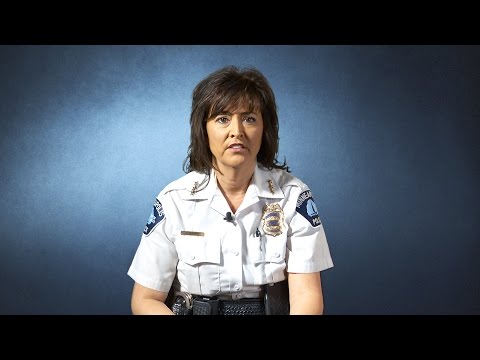 The chief continued: “We will not allow people to set fires on our streets or occupy and vandalize our buildings. We will not allow people to jeopardize the safety of others by causing massive disruptions and hindering emergency vehicles from helping those in need. The (Minneapolis Police Department) has to, and will, strike a balance between First Amendment rights with the safety of everyone.”