The loss of sea ice could influence global weather patterns, they say

Earth’s Arctic ocean freezer is making fewer ice cubes, and that could be a problem throughout the Northern Hemisphere, researchers at the National Snow and Ice Data Center are warning.

The center, part of the University of Colorado at Boulder, reported Monday that the spread of Arctic sea ice set a new record low for the second straight year, stopping last week at 5.607 million square miles.

“The Arctic is in crisis. Year by year, it’s slipping into a new state, and it’s hard to see how that won’t have an effect on weather throughout the Northern Hemisphere,” said Ted Scambos, a lead scientist at the center. 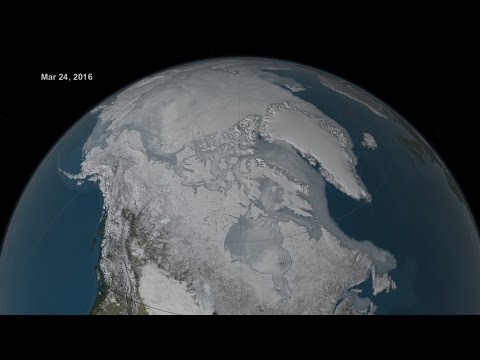 Arctic sea ice reflects heat from the sun. Less ice means more heat given off the from ocean and higher Arctic temperatures. That can affect weather around the world by, among other things, disrupting the jet stream – the high-speed, high-altitude wind current that carries weather patterns from west to east.

Those disruptions can slow weather systems to a crawl and induce temperature extremes, researchers say.

Scientists say the loss of Arctic ice – an average of 20,800 square miles a year since the 1970s, according to NASA – is the result of climate change.

This winter has been a particularly warm one in the Arctic, with air temperatures as much as 10 degrees Fahrenheit above average near the edges of the ice pack, according to Walt Meier, a sea ice scientist at NASA’s Goddard Space Flight Center in Greenbelt, Maryland.

Unusual winds from the south and an influx of warm Atlantic water have also played a role, the snow and ice center said.

That has more to do with how early ice begins melting in the upper Arctic, according to researchers. But, given the warm winter, ice and snow cover is shallower than usual and could produce more melting.

The Arctic ice pack shrank to record low summertime levels in 2005, again in 2007 and most recently in 2012, according to the center.