The song, called “This is For My Girls” and written by Academy Award-nominated and Grammy Award-winning songwriter Diane Warren, will serve as an anthem for the U.S. government-wide initiative launched by the President and the first lady one year ago to help the more than 62 million girls who are not in school get access to education.

As part of First Lady Michelle Obama's Let Girls Learn initiative, she poses with young female students in front of the White House on March 8, before an event to mark International Women's Day.
NICHOLAS KAMM/AFP/Getty Images

Michelle Obama to girls: 'Push past those doubters'

All proceeds from U.S. iTunes sales of the song will back the Peace Corps’ Let Girls Learn fund, which provides training to Peace Corps volunteers so they can become change agents for girls’ education in their communities. The partners on the song, including Apple, Motown, the artists and their respective labels, have all donated their royalty fees in support of Let Girls Learn, according to the first lady’s office.

During an appearance at the South by Southwest annual event in Austin, Michelle Obama on Wednesday also called attention to a new pledge drive, encouraging people all over the world to commit to help girls go to school and stay there. 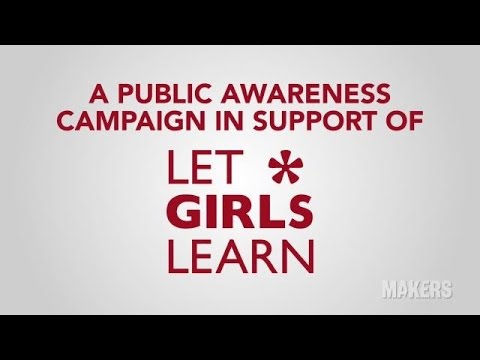 “Today we take the next step to get those girls into school where they belong. It’s time to act,” said Obama in a new public service announcement. “Go to 62milliongirls.com and take the pledge to support girls education around the world.”

The PSA and song were executive produced by AOL’s Makers program.

What do you think is the best way to help girls learn? Share your thoughts with Kelly Wallace on Twitter @kellywallacetv.