You may have heard a fantastic story about how a penguin swims 5,000 miles every year to see the man who saved his life.

It’s a heartwarming story that’s almost too good to be true.

This story has been circulating on social media throughout this week. While there’s some truth behind it, it’s also filled with plenty of misinformation.

CNN reached out to biologist Joao Paulo Krajewski, who documented this story for Globo TV, a media network in Brazil, in February.

“I am happy to see the story I presented spread all over the world, but I am also concerned by the amount of misconceptions spread and by some articles changing my statements,” Krajewski posted on Facebook.

Ever since Krajewski’s story was published online on March 6, there have been duplicate reports that the penguin travels over 5,000 miles to visit the man, but Krajewski says this is false.

“It is a beautiful story because the penguin was in very bad shape and about to die when it was first found and the men gave him a second chance,” Krajewski told CNN.

Here is the real story behind Dindim, the traveling penguin from South America.

In May 2011, Dindim was caught in an oil spill. The Magellanic penguin could barely move. Joao Pereira de Souza found the helpless creature in his backyard, which opens up onto Proveta Beach in Rio de Janeiro State, Brazil.

The 71-year-old retired mason cared for the penguin by washing the oil off of Dindim’s body and fed the bird sardines over the next few days.

Dindim stayed outside while Pereira de Souza nursed him back to health.

Magellanic penguins live off the coast of Patagonian South America. They can live in the ocean as long as five months at a time before returning to the coast. These penguins are known to breed off the coast of Argentina, but have been spotted occasionally as far north as Rio de Janeiro.

When Dindim seemed strong enough, Pereira de Souza took him to a nearby island and released the bird into the sea. Later that day, Pereira de Souza heard squeaking in his backyard. Much to his surprise, he saw the penguin had returned and was calling out for him.

Magellanic penguins are known for their loud, mournful calls, similar to those of a donkey. 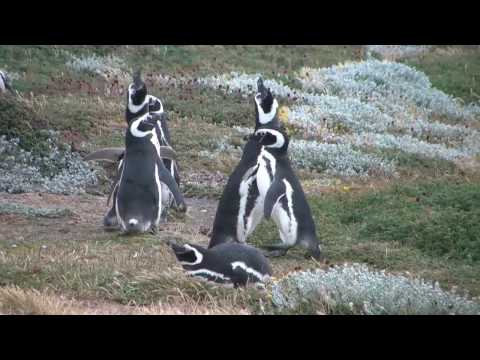 The grandson “could not properly pronounce the word ‘pinguim,’ Portuguese for penguin,” said Krajewski. Instead the toddler would pronounce it “dindim.”

One day in February, Dindim simply disappeared. It is unknown where the black and white creature ventured off to, but months later he returned.

“Because penguins are usually very loyal to their pair and breeding site, where they spend the summer, they tend to come back to the same place every year,” said Krajewski.

Pereira de Souza heard a loud squeak coming from his back yard that June and Dindim was there, waiting for him. The two were reunited again. This has happened every year since: The penguin returns in late June and stays until mid-February.

Krajewski says they don’t know where Dimdim goes the rest of the year, but the biologist says it’s extremely unlikely that he travels to Patagonia, which is thousands of miles away.

“This is because Dindim stays in Ilha Grande (where Proveta Beach is located) at the same time all other Magellanic penguins are breeding in Patagonia and other islands down South,” said Krajewski.

“When these penguins finish breeding and moulting, they migrate and spend months feeding in the sea.”

This year, Krajewski said, they were able to tell that Dindim is about 6 years old by the measurements of his bill. Researchers with Brazil’s Ubatuba Aquarium also took a blood sample and tagged him for future research.

“Professionals who work with animal rescues make the most to avoid relationships like this so they are able to reintroduce the animal into the wild,” said Krajewski. “But this isolated case in Brazil certainly allowed Dindim to live and was the best this humble and kind man could do for the penguin.”