It was February 2011. Trump appeared quiet, reserved and, in an unlikely move for the media-hungry mogul, he even scuttled press interviews to prepare for his speech.

Trump came to the nation’s capital at the behest of GOProud, a small upstart group of gay conservatives who, in a Hail Mary attempt to make a name for themselves among Republicans, had invited him to be a surprise speaker at the 2011 Conservative Political Action Conference, the nation’s largest annual gathering of right-wing activists.

The speech Trump would deliver to a standing-room-only crowd would help launch his stardom among conservatives and set off a long chain of events that would lead to his status as the Republican Party presidential front-runner just four years later. 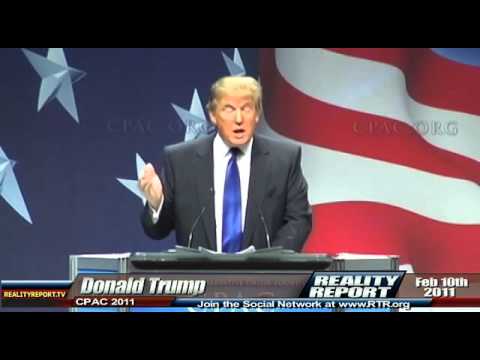 This week, Trump is preparing to return to the same conference on Saturday as the Republican front-runner for president. And the two men who helped start it all – GOProud leaders Christopher Barron and Jimmy LaSalvia – are horrified at what they call Trump’s divisive campaign rhetoric and want people to know how much they regret what they helped unleash.

“I’m sorry, America. I helped Donald Trump to give his first speech as a potential candidate,” LaSalvia told CNN in an interview. “And now I’m going to work to make sure he never gives an Inauguration speech.”

A time before Candidate Trump

With the presidential campaign as such a dominant force in American life today, it is easy to forget there was a time in history before Trump was a White House contender. An era when Trump had not yet offended Hispanics by calling some Latin American immigrants “rapists”; before Trump questioned John McCain’s bravery during the Vietnam War; before Trump became the darling of white nationalists and even before Trump uttered a word about President Barack Obama’s birth certificate. In those early days of 2011, Trump was a preeminent national media celebrity, a reality TV host of one of the most popular shows on television, a best-selling author and an international businessman who in many ways appealed to both sides of the aisle.

Trump’s 2011 speech wasn’t his first foray into politics, of course. He had long played a role as a fundraiser and even toyed with running for president in 1988 and 2000. But 2011 marked the start of Trump’s serious and aggressive foray into the arena that led him to officially announce his Republican candidacy in 2015.

A couple years into Obama’s presidency, Trump began making overtures to the political right, even hinting that he might make a run for the White House himself. And for Republicans desperate to find a real-life celebrity to call their own, someone like Trump was an amazing get.

In 2010, conservative leaders, fresh off an enormous victory in the midterm elections fueled by the tea party, were engaged in a ferocious battle over whether Barron’s group, an organization of openly gay conservatives, could adopt a formal role in the movement’s largest annual meeting known as CPAC. In 2011, the American Conservative Union, which organizes the conference, allowed GOProud to sponsor the event, a decision that prompted protests and boycotts from other conservative groups.

GOProud wanted to make a big impression at the conference, so Barron, the organization’s chairman, called in a favor from a GOProud supporter, Republican political operative Roger Stone, who was close with Trump. They finalized the details of the surprise appearance just days before the conference began.

“On our side of the aisle, we’re hard-pressed to find celebrities that people get excited about. Democrats have every TV star and movie star,” Barron said. “I thought, let’s do something fun. Let’s make this entertaining and will get people excited. And frankly, it did.”

Barron and LaSalvia recall the morning leading up to Trump’s speech as a hectic, logistical nightmare. Trump’s private jet, which he loaded with friends to watch his remarks, was too big to land at Reagan National, the airport closest to Washington, so it touched down at an airport nearly an hour’s drive away that had longer runway, requiring CPAC to push back his speaking time.

When Trump finally arrived at the hotel in northwest Washington, LaSalvia and Barron met him in a private suite where he could prepare. LaSalvia remembers Trump seeming rattled and unlike the braggadocios persona he portrayed on television. Trump asked for a few minutes to prepare in the bathroom. When he came out, an aide handed Trump a hand wipe.

“He wiped his hands, and then I saw him looking around for a garbage can. He didn’t see one, so he just threw it down on the middle of the floor of the hotel suite,” LaSalvia recalled. “It was kind of weird.”

Trump attorney Michael Cohen, who was alongside him that day, did not respond to a request for comment about the 2011 speech. Nor did Hope Hicks, his campaign spokesman.

When the time for the speech came, Trump joined his entourage and a gaggle of gay conservatives as they walked through the crowded hotel lobby and were mobbed by supporters and gawkers asking for photos and autographs.

Inside the main ballroom where he would deliver his speech, a young Texas lawyer with black cowboy boots named Ted Cruz was finishing an introduction of CPAC Director Lisa De Pasquale, who had worked with GOProud to secure Trump’s appearance.

De Pasquale introduced Trump. He kissed her on the cheek after strolling across the stage to “The Apprentice” theme song, “Money, Money, Money.” The audience went wild.

“You’re hired!” a woman yelled from her seat.

“You’re hired,” Trump said back. “These are my people. This is beautiful.”

Trump read much of his speech line by line from a piece of paper, hitting on topics that would later become part of a future presidential stump speech.

The subjects will sound familiar: He lamented that the United States was a “laughing stock” and a “whipping post” under Obama, and he pointed specifically to China and Mexico. He read quotes from other people saying how great he was, and reminded the audience that he went to the “best” schools. And, in an early sign of things to come, he toyed with a conspiracy theory.

“Our current president came out of nowhere.,” Trump said. “In fact, I’ll take it even further: The people who went to school with him, they never saw him. They don’t know who he is. It’s crazy.”

With that speech, Trump made an impression on conservative activists that would carry him through the next several years.

“There were things he said in that speech that endeared him to the movement,” De Pasquale, who wrote a book about her experience with the ACU, recalled.

When Trump came down from the podium, he seemed like a different person, feeding off the energy of the crowd.

“It was the first time he spoke as a potential candidate. That was a big deal,” LaSalvia said. “I realized that maybe he wasn’t so talkative at first because he hadn’t done that before. Afterwards, he was more himself.”

LaSalvia and Barron walked with Trump and his entourage back through the hotel, waiting for Trump as he paused for photos and handshakes with the hotel service staff and took questions from reporters in the halls.

LaSalvia and Barron were overjoyed as they said goodbye to Trump outside.

“Do us a favor, please run for president!” Barron hollered to Trump after they snapped a final photo together.

Trump obviously gave it some thought. What he did next has haunted the two of them ever since.

Donald Trump at CPAC 2011 (behind the scenes) 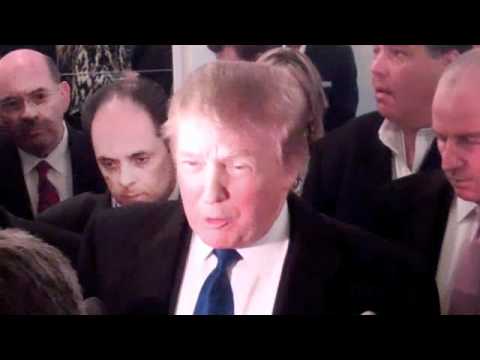 After Trump’s CPAC speech, the calls for him to join the presidential race grew louder. Television bookers called nonstop to get him on their shows. Dangling the possibility that he could run for president in 2012, Trump became a regular keynote speaker at conservative conferences across the country.

In addition to using the opportunity to promote himself, he also used the platform to make an unfounded case that Obama was an illegitimate president who was ineligible for office because, as Trump alleged, he was born in Kenya, not the United States. Trump’s penchant for media dominance whipped up a frenzy of once-marginalized conspiracy theorists and the real estate mogul became known as the nation’s most prominent “birther.” The uproar calmed down in April 2011 when Obama provided more documentation for his birthplace.

Four years later, Trump finally pulled the trigger on his presidential run and proceeded to shoot competitors’ campaigns out of the sky like target practice. Today, Trump is closer than any remaining contender to the nomination, and his unorthodox and controversial campaign has threatened to tear the Republican Party apart.

One could make the case that this massive snowball of campaign – even in a small way – got its start at CPAC in 2011.

“I don’t think it’s something to apologize for because all I did was give him a platform with the help of GOProud and other people at the ACU,” De Pasquale said. “There have been people who have spoken who went nowhere. I don’t feel bad about it.”

But the former leaders of GOProud, a group that is now defunct, do feel remorse. After the 2012 presidential election, LaSalvia abandoned the Republican Party altogether and penned a tell-all book about his exodus. Barron works as a media strategist, but he’s part of the growing ranks in the GOP who have vowed not to support Trump if becomes the nominee.

“I think we both got out of it what we needed out of it. He used us and we used him to further our goals,” LaSalvia, who plans to campaign for Hillary Clinton, said. “I admit, I was enamored by Trump at first. I understand the appeal he’s having with people because I’m frustrated and I’m mad at the system too. But Donald Trump isn’t the answer.”

For Barron, Trump’s leadership of the birther movement, his comments insulting Sen. John McCain for being a prisoner of war and his less-than-full-throated rejection of white nationalists who support him, have led him away from Trump.

“He has unleashed forces with the conservative movement that we will be dealing with for years and years to come,” Barron said. “If I would have known what I know now, I would have found somebody else.”