How Muslim women are winning the 2016 campaign

Editor’s Note: Engy Abdelkader is assistant director and adjunct professor of The Bridge Initiative, a research project at Georgetown University. The views expressed in this column belong to Abdelkader.

This presidential election season we’ve paid much attention to the anti-Muslim ideas some presidential candidates like Donald Trump spew – and rightfully so.

Most political candidates would never dare make such utterances about any other religious minority group.

Still, in the midst of the vitriol and alarming political rhetoric, an intriguing phenomenon has appeared: the emergence of American Muslim women.

And, as America heads to the polls, perhaps Muslim women are the winners in the 2016 presidential campaign.

Before you scoff, let me explain.

“As an American Muslim student who aspires to change this world, hearing the rhetoric that’s going on in the media makes me sick. … So to the next president of the United States, what do you think about that?”

Sanders embraces Muslim student Remaz Abdelgader during an event at George Mason University in Fairfax, Virginia, on October 28. Asked what he would do about Islamophobia in the United States, Sanders said he was determined to fight racism and "build a nation in which we all stand together as one people."
Alex Wong/Getty Images

The audience erupted in applause. In response, Sanders committed to combating Islamophobia and invited Abdelgader, who challenged stereotypes that Muslim women are silenced and submissive, to the stage.

Next, Rose Hamid attended a Trump rally in January to protest Islamophobia. In a piece she penned for CNN, the 56-year-old flight attendant explained that she was prompted by a sense of “responsibility to represent my faith and my country with clarity and dignity.”

In contrast to stereotypes depicting Muslims as violent and angry, Hamid responded to Islamophobia with a smile. When a Trump supporter asked whether she had a bomb, she simply smiled and retorted, “No, do you?”

And, when another demanded she leave, she smiled again and asked, “You don’t know me, why would you say something like that?”

Identifying herself as a retired Air Force veteran, and thereby challenging stubborn misconceptions of Muslims as disloyal and suspicious, Tariq-Munir asked whether our country was still the best place for her to raise her chidlren.

And Hillary Clinton denounced the way Trump has spoken about Muslims as “shameful,” “harmful,” and “dangerous.”

Most recently, Nabela Noor posed this question at a GOP debate last month in Iowa.

“In 2015, the number of hate crimes against Muslims in the U.S. has tripled. … As president, what would you do to address this toxic climate and promote increased tolerance in the United States?” 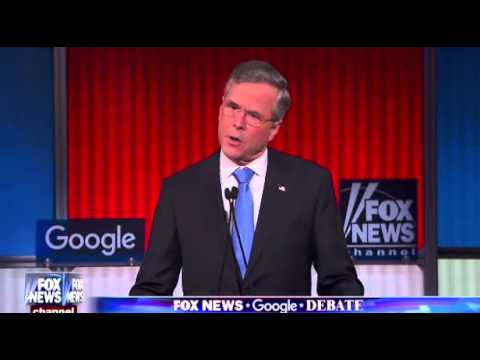 She later explained her motivation, “…the way things are now with the cultural landscape — it’s scary, it’s frightening. It made me think that I needed to use my voice.”

So, why do I mention these examples?

First, these women are holding our presidential candidates accountable for a political climate that undermines their freedom of religion. And, one can’t help but believe that they’re having a positive impact.

As of January, some polls show that Americans hold increasingly unfavorable views of Trump.

Second, these women are educating the public about their community and its concerns. Research shows that Americans still hold negative views about Muslims generally and, more specifically, their treatment of women.

According to an analysis conducted by Georgetown University’s Bridge Initiative of 20 years of survey data, 1 in 5 Americans hold unfavorable views of Muslims, and about 70% of Americans don’t think Muslims respect women.

In fact, half of Americans think Muslim women enjoy a lower social standing than men in the United States despite evidence that shows Muslim women are second only to Jewish women in educational levels among religious women.

Each of these Muslim women – an articulate college student and aspiring human rights attorney, a courageous flight attendant, a retired Air Force vet and mom, and a popular fashion guru – help foster greater understanding about American Muslim identity and experiences.

Through their civic engagement (widely lauded as an American value) and religious attire or statements (identifying their faith beliefs to huge audiences), they show how these multiple identities can be reconciled.

Finally, each of these women provide a much-needed counternarrative to negative depictions found in mainstream media. Research from MediaTenor, an international research institute, shows that 9 out of 10 news stories about Muslims and Islam in the United States, Germany and United Kingdom now involve violence: war or terrorism. In 2015, Muslim newsmakers were largely terrorists or warlords.

Significantly, Rema Abdelgader, Rose Hamid, Erum Tariq-Munir and Nabela Noor are representative of the peaceful majority of American Muslims whose stories don’t always make our TV or computer screens. Everyday Muslims, without a political track record, these women are making news here and around the world, in a good way.

Unlike the three Muslim women who were told to move out of a photographer’s shot during President Barack Obama’s 2008 run for the White House, American Muslim women are center stage this election season, representing their faith community, challenging Islamophobia and shining.