Hollywood: A town divided when it comes to race

#OscarsSoWhite is a reflection of a bigger issue

One academic says Hollywood is missing out on money

Hollywood is a city where truth is fluid.

Biographical movies that take liberties with the truth are utilizing “creative license.” Why not? Hollywood is the land of reinvention, where you can be whomever you want to be.

It’s all about make-believe.

For some observers, that includes the illusion of inclusion when it comes to diversity.

“2013 was the year of black film, with ’12 Years a Slave’ and all those acclaimed films that year, and in 2014, it went right back to business as usual,” said Darnell Hunt, director of the Ralph J. Bunche Center for African American Studies at UCLA. “(The slave rebellion film) ‘Birth of a Nation’ was the hot film at Sundance this year, but who knows what the rest of the (black) films in 2016 will be like?”

They’ll certainly be a topic of conversation. Thanks to #OscarsSoWhite, plenty of people are talking about diversity and the Academy Awards this year.

Fast facts about the Academy Awards

The hashtag debuted with the Oscar nominations in 2015 and reappeared in January after not a single person of color was nominated for any of the acting awards. Coupled with high-profile issues like the shootings of unarmed black men by police, it yet again provided fodder for discussions about race in Hollywood.

But the issue of the entertainment industry and race goes well beyond nominations. For that matter, it’s well beyond just black/white issues.

Lack of diversity, and the struggle for minorities to find equal opportunities and recognition, are very real national issues. Hollywood is just a microcosm.

Americans have been in love with the movies and television since each burst on the scene. Both have provided escapism and something for Americans to aspire to. But as the nation’s population has grown more diverse, the industry has been slow to catch up.

“The movie industry continues to ignore audiences of color, to its own detriment, given the box office success of movies that do feature diverse casts,” Roxane Gay wrote in a New York Times opinion piece headlined “The Oscars and Hollywood’s Race Problem.” “It continues to ignore the simple fact that people of color want to see their lives reflected in the movies they watch. Representation is not a lot to ask.”

Those who are being represented tend to look like studio heads.

“The film industry still functions as a straight, White, boy’s club,” according to a recent study from the Annenberg School for Communication and Journalism at the University of Southern California. The study examined more than 11,000 speaking characters, 10,000 people working behind the scenes and 414 stories produced by 10 companies in movies, TV and digital platforms.

“Over 50% of stories featured no Asian speaking characters, and 22% featured no Black or African American characters,” it said. “The complete absence of individuals from these backgrounds is a symptom of a diversity strategy that relies on tokenistic inclusion rather than integration.”

The color of money

For Hunt, whose center produces a diversity report each year and studies issues of race and Hollywood, the industry is overlooking another color: green.

“It’s pretty clear when you look at the data that people of color are the majority of the film audience,” Hunt said. “They are buying most of the tickets and even for the bigger films. At some point, the industry is going to have to realize that unless these films are catering to the market, we are leaving money on the table.”

In Hollywood, money and merit are two very different things. Being a blockbuster at the box office does not often translate to awards-season accolades, much to the disappointment of fans. Just ask devotees of the latest “Star Wars” film, which did gangbusters at the box office but was not nominated for best picture at the Oscars.

Oscar-winning actress Helen Mirren told the UK’s Channel 4 news that it was “unfair to attack the academy” about the lack of diverse nominees this year.

“The issue we need to be looking at is what happens to the film before it gets to the Oscars,” she said. “What kind of films are made. And the way in which they are cast. And the scripts. And go all the way back to the writing of the scripts. It’s those things that are much more influential ultimately than who stands with an Oscar.”

Helen Mirren on Trumbo, Donald Trump, and the Oscars 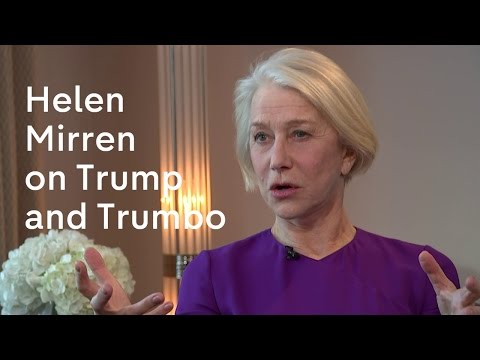 That type of reasoning may not be comforting to the artists of color who have tales to tell of what it means to be “other” in Hollywood.

“(In a mid-1990s) meeting, I was determined the lead (for a film) would be a black woman, and I remember the executive saying, ‘Why does she have to be black?’ And me saying, ‘She doesn’t have to be; I want her to be black. Why would you not consider it?’ “ John Ridley, screenwriter for “12 Years A Slave,” told The New York Times. “It was stunning that they were so comfortable (saying that) to a person of color. That was the most painful, that casual disregard for my experience.”

Writing for “The American Spectator,” Stein said, “The TV screen and the movie screen are overflowing with black actors, especially these days in commercials, but also in movies. The black actor in the recent ‘Star Wars’ had no important role to play except to be black in a blockbuster film.

“Why don’t the nominees look like America? What does that even mean?” Stein wrote in the conservative publication. “The point is to recognize talent, not demographics. There weren’t many Hispanic or Asian actors listed either. The demand that mere population be recognized instead of talent would be more apropos for locating fast food restaurants than recognizing acting talent.”

Stein is right about Hispanic and Asian actors. Neither group has been represented with an acting Oscar in more than 50 years.

“There are 55 million Latinos in this country and although we all come from various backgrounds our unity can make a movie explode at the box office or a tv show soar to the highest viewers possible,” she wrote. “The better these projects do financially, the more money they will spend on putting Latinos In blockbuster films, as leads in tv shows etc.”

Opinion: Hollywood is missing a big opportunity with Latinos

“Real Time” host Bill Maher has a more pointed view. He blames it on Asian countries and the film industry’s international marketing.

“The dirty little secret is, most movies are made now with an eye to the foreign market, and Asians really are racist,” Maher said during his show.

She continued, “But as an explanation for #OscarsSoWhite, Maher’s blame game is so laughable that even a blogger posting on conservative Alan B. West’s eponymous website thought it mixed apples with oranges. Usefully, however, it’s symptomatic of the kind of quip-bait that deflects responsibility onto handy targets rather than taking a good hard look at the mirror.”

“The ‘Fast & the Furious’ franchise is one of the industry’s most successful, and we haven’t seen any attempts to duplicate that,” he said. “(The movie) is the personification of the spirit of multiculturalism and the willingness to cast diversely. If there was a true willingness to see diversity, that would happen.”

Robertson said he believes that while the bigger issue is the studio system, the #OscarsSoWhite conversation is valuable, as it is moving some to action, be it filmmakers of color intent on making their own way or those who want to keep the dialogue going beyond awards season.

Mogul Russell Simmons even organized – in 10 days – the first All Def Movie Awards, hosted by Chris Rock’s comedian brother Tony Rock, to celebrate diversity in film. The ceremony is set to air on Fuse Network, opposite the Oscars.

Robertson applauds the academy’s new diversity plan, which has the goal of doubling the number of women and diverse members by 2020. And there is an increased focus on executives such as Channing Dungey, an African-American woman who was recently named president of entertainment for ABC.

It remains to be seen whether Hollywood is ready to embrace the change or if it will once again be business as usual.

5 things to know about the Oscar nominees