Hillary Clinton’s presidential campaign released a new ad in Nevada in a final push to appeal to Latino voters before Saturday’s caucuses.

Clinton’s one-minute long ad, titled “Brave,” shows a 10-year-old girl who starts crying while telling Clinton at a campaign event that she’s afraid of her parents being deported. 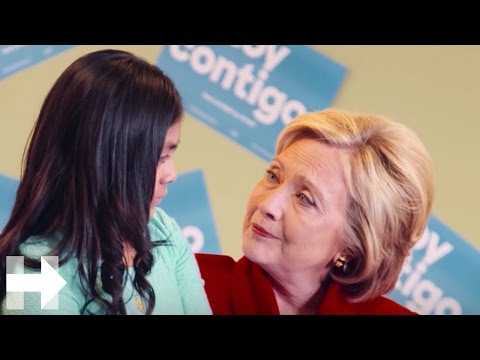 “My parents, they have a letter of deportation,” she tells Clinton. “I’m scared that they’re going to be deported.”

Clinton calls the girl over, and with her arm around her, tells her, “I’m going to do everything I can so you don’t have to be scared.”

Poll: Clinton, Sanders in a dead heat for Nevada

The camera then shows members in the audience tearing up at Clinton’s response to the girl.

According to NBC News, the moment happened last weekend after reporters left the room at a Las Vegas campaign event.

Clinton holds an edge among women voters, while Sanders tops the former secretary of state among voters under age 55, according to the poll.

A strong Latino turnout is projected in Nevada for the general election in November, at 53% of those eligible in the demographic. If that projection is right, Latino voters will account for 20% of all voters casting ballots, according to a report by CNN en Español and CUNY’s Center for Latin American, Caribbean & Latino Studies. The report also shows that Latinos accounted for 15% of ballots cast in the state in 2012’s general election.