By Phoebe Parke and Chris Giles, CNN
Updated 5:48 PM EDT, Thu May 17, 2018
Link Copied!
Noor Complex Solar Power Plant, Morocco —
The world's largest concentrated solar power (CSP) plant, called the Noor Complex, is being built in the Moroccan desert. Noor 1, the first phase of three, is located near the town of Ouarzazate on the edge of the Sahara.

It was switched on in February, 2016, and provides 160 megawatts of the project's planned 580 megawatt capacity. It's set to be completed by the end of 2018. The project is expected to provide electricity for over 1 million people.
FADEL SENNA/AFP/AFP/Getty Images
Noor Complex Solar Power Plant, Morocco —
Morocco has committed to increasing its share of renewable energy generation to 42% by 2020.
FADEL SENNA/AFP/AFP/Getty Images
Hydropower sharing —
Chinese construction companies are developing a record-breaking hydropower project in Nigeria that has been compared to the world's largest hydropower plant the Three Gorges Dam (pictured) in Yichang, China.
STR/AFP/GettyImages/file
Gibe III Hydroelectric Project, Ethiopia —
Africa is scattered with impressive renewable energy megaprojects. Harvesting the power of the Omo River, approximately 300km south west of the capital Addis Ababa, Gibe III is one of the largest of its kind in Africa.
Courtesy Salini Impregilo
Gibe III Hydroelectric Project, Ethiopia —
The project has started producing energy and with all turbines switched on, it will have an outgoing power capacity of 1,870 megawatts -- according to the Italian company, Salini Impregilo, which is building the dam on behalf of Ethiopian Electric Power.
Courtesy Salini Impregilo
Olkaria Geothermal Power Plant, Kenya —
Several renewable power plants are operating in the geothermal fields of Olkaria, Kenya, harvesting the power of underground geothermal energy.
The site is located on the floor of the Kenyan Rift Valley, near the shores of Lake Naivasha some 120 kilometers north-east of the capital, Nairobi.
TONY KARUMBA/AFP/Getty
Olkaria Geothermal Power Plant, Kenya —
A recent expansion, Olkaria III, began commercial operations in 2015 and is expected to power over 250,000 households in Kenya, supporting the Government's 2030 vision to increase generation capacity, according to the construction company, Ormat.
The Olkaria plant has a capacity of 280 megawatts and is connected to the nation's grid. Geothermal power is big in Kenya, where it accounts for nearly half the country's energy supply.

TONY KARUMBA/AFP/Getty
Lake Turkana Wind Project, Kenya —
The 310 MW Lake Turkana Wind Power Project, which is being developed in the country's North-East, will cover 40,000 acres. The 70 billion Kenyan Shillings ($690 million) project is the largest private investment in Kenya's history, according to the developers.
Courtesy Lake Turkana Wind Power
Lake Turkana Wind Project, Kenya —
At least 100 turbines are expected to be ready on site by September, 2016. On completion, the project will comprise 365 wind turbines, each with a capacity of 850 kilowatts, and will be connected to the national grid system. The company hopes to produce 18% of Kenya's electricity generating capacity when it comes online.
Courtesy Lake Turkana Wind Power
The Rwanda Solar Power Field —
An Africa-shaped 8.5 megawatt solar plant east of Rwanda's capital Kigali came into full production in December 2015. Its 28,360 photovoltaic panels spread across 17 hectares and light up 15,000 homes in the region -- boosting electricity generation in Rwanda by 6%.

Courtesy Gigawatt Global
The Rwanda Solar Power Field —
The project was financed in collaboration with Power Africa, a transnational initiative launched in 2013 by U.S. President Obama with the aim of adding 30,000 megawatts of clean electricity to sub-Saharan Africa.
Courtesy Gigawatt Global
Ingula Pumped Storage Scheme, South Africa —
The Ingula Hydroelectric Plant in South Africa has now begun production, and is the fourth of its kind to be built in the country. With some parts still under construction, it has a planned capacity of around 1,100 megawatts and will be one of the largest in terms of power generating capacity once fully operational, according to construction company Salini Impregilo.

Courtesy Salini Impregilo
Ingula Pumped Storage Scheme, South Africa —
Located below the Little Drakensberg mountain range along the border of the KwaZulu-Natal and Free State provinces, the project stretches underground through a large tunnel network several kilometers long. It will generate and store power using turbines and pumps which recycle the water by pumping it back up to the reservoirs at night when the demand is low.

The project could power one million homes

The site near the city of Ouarzazate – famous as a filming location for Hollywood blockbusters like “Lawrence of Arabia” and “Gladiator” – aims to produce enough energy to power over one million homes by the end of the year and reduce carbon emissions by an estimated 760,000 tons per year.

The first part of a three-phase project of the thermosolar farm was officially turned on in 2016 by His Majesty Mohammed VI of Morocco.

“It’s been operational since 2016. The final two are under construction and are in the final stages and should be fully operational by the end of this year,” Moez Cherif, Lead Energy Economist for the MENA (Middle East and North Africa) region for the World Bank, told CNN.

Harnessing the power of salt 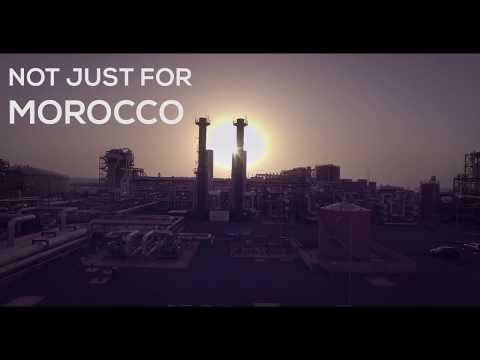 The solar plant, called the Noor complex, uses concentrating solar power (CSP) which is more expensive to install than the widely used photovoltaic panels, but unlike them, enables the storage of energy for nights and cloudy days.

Mirrors focus the sun’s light and heat up a liquid, which, when mixed with water, reaches around 400 degree Celsius. The steam produced from this process drives a turbine and generates electrical power.

How solar power lights up Africa

A cylinder full of salt is melted by the warmth from the mirrors during the day, and stays hot enough at night to provide up to three hours of power, according to World Bank, who financed construction of the plant with a $400 million loan combined with $216 million provided from the Clean Technology Fund.

“Morocco is consider as a leader in the MENA region at least as far as renewables are concerned,” said Cherif.

Imported fossil fuels currently provide for 97% of Morocco’s energy need, the World Bank says. As a result the country is keen to diversify and start using renewable energy.

“Africa, in general, and North Africa in particular, have tremendous potential for solar generation that remain largely untapped,” Sameh Mobarek, Senior Counsel and World Bank’s project manager told CNN in 2016 when the project was first switched on.

It is hoped that the project will positively impact the surrounding area. Approximately 583,000 people live in Ouarzazate town 10km (6.2 miles) from the site.

“Morocco, and Tunisia and some others to an extent, have been rather stable from a political perspective. The supportive regulatory environment, not just for Concentrated Solar Power, but for renewables more generally is also very important,” said Harald Heubaum, a global energy and climate policy expert at the School of African and Oriental Studies (SOAS).

In 2016, the poverty rate there was 23% but the hope is that the cleaner energy and better supply will reduce the occurrence of flickering lightbulbs and malfunctioning hospital equipment.