The 60-second ad, “Accomplishments,” will start running in New Hampshire on Saturday. It shows the MSNBC “Morning Joe” interview of Santorum, who endorsed Rubio this week, struggling to list anything Rubio has done of significance in the Senate during an interview on Thursday. 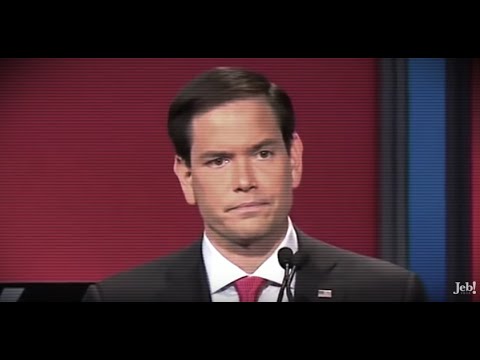 It’s the second ad on the interview this week from a rival of Rubio, who’s been gaining momentum after his strong third place finish in Iowa.

On Thursday, New Jersey Gov. Chris Christie’s team released an ad also featuring Santorum’s interview. Both Christie and Bush have been making the case that Rubio lacks the experience needed to be president, and Bush has especially been trying to compare Rubio to Barack Obama circa 2008.

Rubio defended his legislative record on Thursday, saying Santorum, who just ended his own presidential bid this week, hasn’t had time to study up on Rubio’s record.

But critics argue that all the in-fighting could hurt the establishment brand and pave a path for Donald Trump or Sen. Ted Cruz to win the nomination.

In an interview with CNN’s Jamie Gangel on Friday, Bush hit back at the idea that drawing a contrast with Rubio is bad for the Republican Party.

“He’s attacking me. So does that count, or is this just only a one-way street? Is this the child of privilege that has a free pass, when everybody else has to fight for it? This isn’t bean bag, you know, this is politics,” Bush said. “Every campaign, every candidate will be contrasted and compared. Their records need to be shown.”

Bush, a former mentor of Rubio’s when they both held public office in Florida, stressed that it’s “not personal” between him and his one-time protégée, and he pledged to support the Republican nominee no matter who it is.

“There’s nothing personal about this at all,” Bush said.

Watch more of the interview – including pointed comment about rival Donald Trump by his popular 90-year-old mother, former first lady Barbara Bush, who is out campaigning with him — set to air Friday on CNN’s AC360 at 9 p.m. ET.