Donald Trump on Wednesday accused Sen. Ted Cruz of stealing the Iowa caucuses, calling for either new voting there or the results to be nullified.

Meanwhile, Ben Carson hit CNN for what he said was an inaccurate report that he was leaving the race on Monday, even though the network only reported that he was heading home to Florida for a short break after the caucuses.

“Based on the fraud committed by Senator Ted Cruz during the Iowa Caucus, either a new election should take place or Cruz results nullified,” Donald Trump wrote a Twitter, one of a series of Tweets attacking Cruz and questioning the outcome of the Iowa caucuses.

“Ted Cruz didn’t win Iowa, he stole it,” Trump tweeted. “That is why all of the polls were so wrong and why he got far more votes than anticipated.”

“Reality hit the reality TV star in Iowa, so nobody is talking about him now, so he’s trying to regain some attention on Twitter,” Cruz communications director Rick Tyler told CNN. “There are Twitter addiction support groups, so he should seek out his local chapter. “

Cruz himself teased Trump on Twitter early Wednesday afternoon, suggesting his rival become a Democrat and linking to one of his anti-Trump ads.

Cruz then added, “Yet another #Trumpertantrum… @realDonaldTrump very angry w/the people of Iowa. They actually looked at his record.”

Yet another #Trumpertantrum... @realDonaldTrump very angry w/the people of Iowa. They actually looked at his record. https://t.co/S85mxlhLK1

Jimmy Carter: I Would Choose Trump 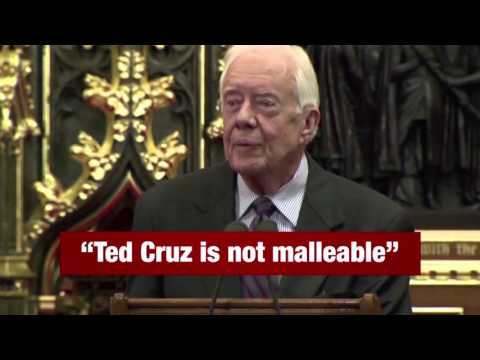 Trump slammed Cruz for sending out deceitful mailers that shared voter’s caucus attendance records with their neighbors and warning voters of “VOTER VIOLATION.”

“The Voter Violation certificate gave poor marks to the unsuspecting voter (grade of F) and told them to clear it up by voting for Cruz,” Trump tweeted. “Fraud.”

Polls in the week leading up to the caucuses showed Trump several points ahead of Cruz, which raised expectations for Trump’s campaign in the Hawkeye State. But on Monday, Cruz was declared the victor after winning 4 percentage points more support than the billionaire real estate mogul.

Trump initially tweeted that Cruz “illegally stole” the Iowa caucuses, before deleting the tweet and tweeting again without the word “illegally.”

Minutes later, Trump tweeted that “during primetime of the Iowa Caucus, Cruz put out a release that @RealBenCarson was quitting the race, and to caucus (or vote) for Cruz.”

“Many people voted for Cruz over Carson because of this Cruz fraud,” Trump said of the Cruz campaign’s caucus day actions.

CNN reported Monday that Carson would go to Florida instead of New Hampshire or South Carolina immediately after the caucuses to take a “deep breath” and get clean clothes. The Cruz campaign informed Iowa precinct captains while the caucuses were underway that Carson was taking a break and suggested that he was suspending his campaign. CNN did not report that Carson was suspending his campaign – instead, CNN said he would return to the campaign trail. Cruz apologized to Carson on Tuesday.

Early Wednesday afternoon, the Carson campaign sent out a fundraising email accusing CNN of spreading “false or misleading information” with the report.

“They led people to believe I was leaving the race,” Carson wrote. “It was yet another example of creating rather than reporting the news, and it’s wrong.”

Cruz also blamed CNN for the rumor, telling reporters in Goffstown, New Hampshire, on Wednesday that his political team passed out a report from the network about Carson’s decision to head home to Florida.

“That was a news story CNN had posted, and our political team passed it on to our supporters. It was breaking news that was relevant,” Cruz said. “Now, subsequently, the Carson campaign put out another statement saying that he was not, in fact, suspending his campaign, and I apologized to Ben for our team not passing on their subsequent clarification.”

“We reported it accurately and here are the facts: Dr. Carson’s staff told us that he would return home to Florida to ‘take a breath’ from the campaign before resuming his activities on the campaign trail. That accurate report was disseminated on television and CNN digital. And that was that,” Baldwin said.

She added: “When somebody tries to take down the media and misreport something, it gets me a little fired up. Forgive me, but I’m going to call out BS if I hear BS. And that was BS.”

On Tuesday, Carson had told CNN’s Jake Tapper on “The Lead” that he blamed the Cruz campaign, not the media, for the controversy, and called on the Texas senator to fire a campaign staffer who said the retired neurosurgeon was dropping out.

“I think whoever is responsible for blatant lying should be dismissed, absolutely. Unless that kind of behavior is acceptable in your campaign culture,” Carson said.

Speaking to reporters Wednesday afternoon at the National Press Club, Carson said he believed the rumor had damaged his showing in the caucuses and reiterated his call that the Cruz staffer who spread the rumor should be fired.

Cruz, however, refused on Wednesday to fire the staffer and stood by his claim that CNN’s report was unclear.

“No, we’re not going to scapegoat anybody, and I would note that the news story that our team passed on was true and accurate,” he said in Goffstown.