It took them nine months to go from San Francisco to Cairns, Australia

They are raising money for breast cancer and veterans charities

They spent nine months on a boat, rowing two-hour shifts all day, seven days a week, without a toilet and with only an hour-and-a-half nap at a time.

Four British women completed their arduous journey across the Pacific Ocean on Monday after rowing about 8,500 miles from San Francisco to Cairns, Australia.

They had no support crew on the journey, and they only stopped twice (for one week at a time) in Hawaii and Samoa for supplies and repairs.

With their arrival, Laura Penhaul, Natalia Cohen, Emma Mitchell and Meg Dyos – the final leg rower – become the first four-person crew to row this trans-Pacific route, and the first team to do it in three stages, according to Walking With the Wounded, one of two British charities they are supporting. The team hopes to raise £250,000 ($356,000) for Walking With the Wounded and Breast Cancer Care.

In one of their last blog posts, the members of the Coxless Crew team said they were focused only on the final 20 miles.

“It’s fair to say that with physical exhaustion, sleep deprivation and a lack of (savory) food we are being tested to our limits,” the team wrote Sunday. “However this is where we draw on our SPIRIT, row hard, row strong, row together.”

HUGE congrats to the incredible @coxlesscrew girls, what an unbelievable effort, right up till the very end! pic.twitter.com/zVR7Rvbs5C

“It’s quite incredible what the body and the mind is capable of,” Cohen told CNN’s Lynda Kinkade by satellite phone a few days before the group landed in Cairns.

The rowers have been videotaping their journey, and that footage will be part of a documentary “Losing Sight of Shore” by filmmaker Sarah Moshman. 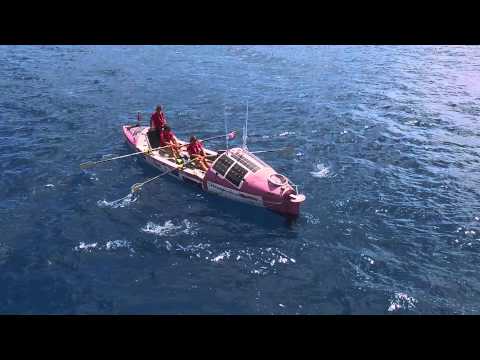 The trip took three months longer than expected after delays during the second leg of the journey from Hawaii to Samoa, Moshman told Kinkade.

“They were very worried about if they would overshoot Samoa, (or) they would run out of food,” she said. “There were a lot of concerns on that second leg. … There’s been no shortage of drama on this journey.”

Four women near goal of rowing across Pacific_00014118.jpg
video

“The main one that comes to mind was between me and Laura, where we argued over a packet of instant noodles,” she said.

Less than 400 rows have been successfully completed across the world’s oceans, according to the Ocean Rowing Society International.

Shortly after the Coxless Crew set off for Australia, Sonya Baumstein attempted to row 6,000 miles from Japan to San Francisco by herself, also with no support. Baumstein had to end her journey about 150 miles into it.