How ‘Bernie’ changed my life 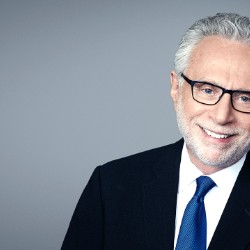 “The Person Who Changed My Life,” a two-hour special hosted by Anderson Cooper and Michaela Pereira, airs Sunday, January 24, at 8 p.m. ET/PT.

My first day at CNN was May 8, 1990. I was very excited but also pretty nervous. I was making the transition from print to broadcast journalism; while I had appeared in the past on news programs as an interview guest, I was jumping into the deep end as a TV reporter. I knew my reporting skills were solid, but I worried about all the other things that went into being in front of the camera.

Fortunately, I had already made a friend named Bernard Shaw – or, as we all called him, Bernie.

Bernie was CNN’s principal Washington anchor when I arrived at Ted Turner’s network. He was already an extremely well-respected figure in broadcast journalism. He had spent time on the White House beat and in Latin America for two major broadcast networks, and he was the star of CNN. Bernie had interviewed me as a guest many times before I had started, and I had watched his work as a fan for years.

Little did I know he would become a friend, a mentor and a role model. I learned so much by watching this TV news legend in action.

PHOTO: CNN
CNN's Bernard Shaw with Wolf Blitzer, reporting on the Oklahoma City bombing. "I remember vividly when we went to Oklahoma City in 1995 after the bombing of the federal office building there. He anchored our special coverage around President Clinton's participation in the memorial service. I joined him to report and provide analysis."
Related Gallery 'The Person Who Changed My Life': Wolf Blitzer

Bernie was a solid professional, a calm and experienced voice in the newsroom and on the air. He was a natural leader, the kind who got people to follow him by example.

That was certainly evident during the days leading up to the first Gulf War in 1991. Bernie went to Baghdad shortly before the bombs started dropping on the Iraqi capital. He volunteered to stay, along with correspondents John Holliman and Peter Arnett, even though the White House and Pentagon warned CNN they could not guarantee their safety.

Bernie and the entire CNN team were staying at the Al Rasheed Hotel in downtown Baghdad. Ted Turner and CNN President Tom Johnson were told by top U.S. officials that the Iraqi regime of Saddam Hussein had intelligence units at that hotel, and it could legitimately be a bombing target. Ted and Tom told our team they could leave or stay; it was up to them. Bernie could have easily left. After all, he was a big shot anchor. But he refused. He said he would not leave the team behind.

Then the war started.

I’ll never forget hearing Bernie calmly tell viewers that “the skies over Baghdad have been illuminated.”

CNN was the only American news organization on the scene. Television history was made. NBC and other broadcast networks took CNN’s coverage live; they had no one in Baghdad. CNN came of age.

I was CNN’s Pentagon correspondent at the time, and remember vividly watching Bernie’s reports and thinking to myself that he was a brave and brilliant journalist. I wondered if I would have had the guts to do what he did. Bernie was a Marine Corps veteran and was always very proud of that experience. To this day, he still says: Once a Marine, always a Marine. It helped keep him calm in that and many other situations.

We worked closely together throughout the 1990s – covering historic moments in the United States and world events, including the failed Soviet coup in August 1991, the collapse of the Soviet Union in December 1991, the election of Bill Clinton in November 1992 and his inauguration on January 20, 1993. By then I was CNN’s Senior White House Correspondent.

Bernie was an anchor who liked to cover the big stories of the day. He often joined us on major presidential trips around the world. Each time I watched him report, I learned something new from him. And our friendship grew stronger.

I remember vividly when we went to Oklahoma City in 1995 after the bombing of the federal office building there. He anchored our special coverage around President Clinton’s participation in the memorial service. I joined him to report and provide analysis.

It was an emotional time for me, seeing the aftermath of a major terrorist attack on U.S. soil, an attack carried out by an American. Yet watching Bernie I saw an anchor who could express the emotions everyone was feeling without becoming emotional. I learned about keeping my feelings in check watching him up close that day.

In truth, every day was a learning experience with Bernie. He was always so generous with his advice.

I especially remember how complimentary he was to me on the air. “Very strong report, Wolf,” he would say. My mother and father, who were, of course, devoted viewers, would always call me up and say: “Bernie. Such a nice man.” They were proud parents and were grateful that the lead CNN anchor was praising their son on television. Their friends also noticed and would call my parents to make sure they were watching. They were.

Together we covered the 1996 midterm presidential election and the 2000 election, including the historic Florida recount and eventual U.S. Supreme Court decision. I went to Tallahassee right from the CNN Center in Atlanta on the morning after Election Day. Bernie was so powerful in his anchoring skills. Honest, fair and willing to admit everyone had made the wrong call.

During his time on-air, Bernie was one of those rare anchors who always wanted the reporters in the field to get the full credit for their news scoops. When I had a new development at the Pentagon or the White House, he would let me break the news. He wouldn’t steal it in his setup to my live report. That always meant a lot to me. As an anchor, I try every day to follow his example.

Of course I had support from other remarkable people at CNN during my early days at the network, including our founder, Ted Turner, our then president Tom Johnson, our Washington Bureau Chief Bill Headline, head of news gathering Ed Turner, and head of programing Bob Furnad. Other CNN veterans in the D.C. Bureau – correspondents and producers – also spent lots of time with me in those early days, offering valuable coaching and advice.

Bernie retired from CNN right after the inauguration in 2001, after two decades at the network and an even longer career as a newsman. I felt the loss immediately; but I’ve tried to follow his lead.

Bernie and I don’t see as much of each other these days – we both have busy schedules – but whenever we can, we touch base and trade stories. He’s a terrific friend and a world-class journalist who made a difference in the world and in my life. He inspired me and helped me get to where I am today. And I will forever be grateful.