Its popularity turned into "Batmania," spawning catchphrases and paraphernalia

"It was a very dangerous show to do," co-star Burt Ward says

That night, ABC premiered the TV series “Batman,” a very campy take on the comic book character, complete with our caped hero doing a dance called the “Batusi.” It was, almost literally, an overnight success.

Suddenly, the American public was clamoring for anything and everything Batman, launching one of the earliest merchandising blitzes for a TV show, described as “Batmania.” It aired twice a week, on Wednesdays and Thursdays, and both episodes made the top 10 most-watched shows of the 1965-66 season.

No longer were Batman and Robin just those two heroes who occasionally helped out Superman. On the brink of cancellation just two years earlier, suddenly the DC Comics characters were the hottest thing going. (DC and CNN are both owned by Time Warner.)

The actors who played Batman and Robin, Adam West and Burt Ward, drew big crowds at their personal appearances, and 20th Century Fox rushed out a feature film for that summer.

The “ZAP! BANG! POW!” of the dynamic duo’s fights with each week’s “Special Guest Villain” became embedded in pop culture.

West and Ward portrayed the masked crimefighters earnestly. Their performances made the show an action series for children and a silly comedy for adults.

The show’s fall came as quickly as its rise. In March 1968, ABC canceled the show. NBC was reportedly ready to pick it up, but the sets – which cost hundreds of thousands of dollars to build – had been destroyed, said Ward, now 70.

Still, the show lived on in reruns and remains a ’60s touchstone.

Ward – then a novice actor, now owner of Gentle Giants Animal Rescue – had no idea what he was getting into, he told CNN. The following is an edited version of the interview.

How he landed the part of Robin

Burt Ward: I did some scenes as (Robin’s alter ego) Dick Grayson. Then they told me I have one more thing to do: “Go in the dressing room, and there’s a couple of men in there to help you get dressed.” I told them, “I’m perfectly capable of dressing myself.” I went in there, and from seeing the costume, I asked, “Is this some kind of period piece?” I looked at the dialogue, and it said “Bruce and Dick.” It could have been anybody.

I put on this costume, and it’s the most uncomfortable thing I’ve worn in my entire life.

I still had no idea what it was. Where I grew up, they didn’t have Batman comics; they had Superman comics.

I would get calls every eight or 10 days, asking my head size and my neck size, and all these strange questions. I was later asked to sign a contract. I asked, “Am I signing an agency contract?” They said “No, no, no, you’ve got the role.” And I said, “Well, I didn’t know that!”

On seeing the show for the first time

Ward: I remember sitting in my little apartment with a little television. I had not seen it put together in any form whatsoever – and I watched it and thought, “Gee, this is really good.”

And apparently the rest of North America thought so. The next day, the rating was a 52 share. So 52% of TVs that were on were watching “Batman.” Pretty spectacular.

On his enthusiastic persona

Ward: The producers thought if there really was a Robin, that would be me, due to my nature. They didn’t want any “acting”; they wanted me to be myself.

I loved the line “Gosh, Batman, there’s three of them versus two of us. Odds in our favor.”

On his relationship with Adam West

Ward: We got along great. We’d go on personal appearances, and at night, we’d party and stuff like that. We were always good friends. We’re great friends today!

On the dangers of playing Robin

Ward: There were a couple of problems. To be honest with you, with the mask, you’d have no peripheral vision.

And it was a very dangerous show to do. I was at the hospital four of the first five days, from third-degree burns to explosions to fires and crashes, and 2-by-4s landing on my head. I wasn’t sure I was going to survive the first episode!

On the guest performers

Ward: There were so many demands for actors to be on that show, so they created that “walking up the wall” thing. Every major star, their kids wanted them to be on that show. You could only have one guest star a week. 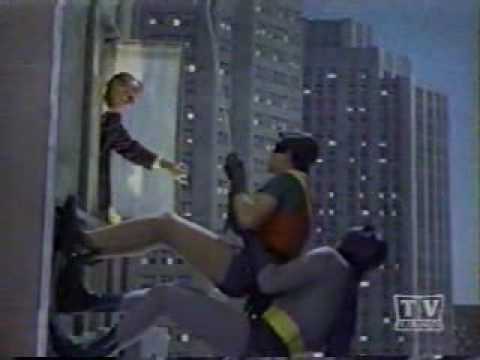 Every one of the (guest villains) was a treat. I was like a kid in a candy store. These were people I looked up to growing up. Victor Buono as King Tut, Vincent Price, who played Egghead, my gosh. They were amazing people, phenomenal people! Just so nice.

On the show’s staying power

Ward: I’ll see a family come up (at a personal appearance), and when they get in front of me, the parents become like children again, talking to me like kids.