Mallows Bay: The ‘ghost fleet’ graveyard where nature has risen from the dead

Some vessels date back to American Civil War

They were built to sail across the Atlantic Ocean to aid the allied effort in World War I, but wound up unused, abandoned, stripped and finally scuttled.

Almost a century on, the “ghost fleet” of Mallows Bay in the Potomac River, 30 miles south of Washington D.C., is positively brimming with life again.

Nature has taken hold amid the rotting hulls and rusted bows of the scores of historic vessels, with flora and fauna inundating the areas where sailors and passengers once stood.

“It has become this really amazing mecca for wildlife,” Joel Dunn, president and CEO of Chesapeake Conservancy, told CNN.

“You’ve got these osprey nests on the front of the boats, and heron rookeries, bats breeding in the hull of the ships – it’s a really rich wildlife and historical location.”

Located near Nanjemoy in Charles County, Maryland, Mallows Bay is not only treasured by locals – it could be on the brink of wider recognition thanks to efforts to designate it a national marine sanctuary.

It is one of two sites – the other is on Lake Michigan in Wisconsin – being considered for sanctuary status by NOAA (National Oceanic and Atmospheric Administration).

The announcement made by President Obama in October 2015 was the first time since 2000 that an official nomination for national marine sanctuary status had been made.

If successful, Mallows Bay will join 14 existing ecological havens including the Florida Keys and Thunder Bay in Lake Huron – one of the five Great Lakes – where nearly 100 vessels have been discovered to date, earning it the nickname “Shipwreck Alley.”

Don Shomette, a marine archeologist helping efforts to get Mallows Bay listed as a protected site, is quietly confident the bid will succeed.

“I took some folks from NOAA down there and they were stunned when they saw the place,” Shomette told CNN.

“We have 185 archeologically-documented shipwrecks in a 14-square-mile area, which makes it one of the most densely-populated places in the western world for historic vessels.”

Ghosts from the past

Shomette is the author of “Ghost Fleet of Mallows Bay And Other Tales of the Lost Chesapeake” – a book borne of a deep-rooted attachment to the site which began on a camping trip with his father in the 1950s.

“I was just into my teens. We went down the river in a small boat and camped at an old civil war wharf – which is still there,” Shomette recalls.

“We told ghost stories that night and the next morning the river was covered with fog — you couldn’t see more than two feet.

“We started downriver and ran into a waterman and he said: ‘Are you boys going to see the ghost fleet?’ And it sent shivers down my spine.

“About 10 minutes later we came underneath the bow of one of the ships looming out of the fog. It was just one of those memorable moments in a young boy’s life.”

Several years later, Shomette conducted a painstaking survey of the site which revealed the presence of a confederate blockade runner from the American Civil War.

Another, the Accomac, a steel-hulled ferry built in 1928, saw service in World War II before winding up in Mallows Bay in 1973 after it was decommissioned following a fire on board.

The majority of ships clustered in Mallows Bay, however, date back to the early 20th century. The so-called “ghost fleet” was part of an unprecedented shipbuilding program undertaken by the U.S. to assist its European allies during World War I.

“When America entered the war in April 1917, two out of four ships leaving a British, French or Italian port was being sunk,” Shomette explains. “So the process of continuing the war was going to go in Germany’s favor.”

Germany’s tactic of “unrestricted submarine warfare” targeted not just military vessels but merchant and passenger ships too — the R.M.S. Lusitania, torpedoed in May 1915, was the most high-profile sinking, killing around 1,200 on board – 10% of them Americans.

With the allies needing boats, and fast, President Woodrow Wilson answered the call for help, setting up the Emergency Fleet Corporation to build and operate merchant and military fleets.

“Within a year we had a million men building ships, cutting the timber, mining the iron for them, building the machinery for them. At one point we became the greatest shipbuilding nation in the history of the world,” Shomette says.

“We had to create from nothing a shipping industry that was going to build a thousand wooden ships in 18 months – normally it would take a year and a half to build a wooden steam ship.”

At Hog Island in Pennsylvania, one of three major steel shipyards built by the government, 50 shipways extended for a mile and a quarter down the Delaware River. At its peak, its 30,000-strong workforce was launching vessels every five to six days.

When warships go luxury: Is this the world's toughest superyacht?

Contracts to build the wooden cargo ships were sent out to shipyards across the U.S. There were eight different designs ranging between 270-300 feet (80-90 meters) in length.

Nearly 400 were completed before the end of the war in November 1918. A handful were sold, some finding work ferrying cargo up and down the Pacific coast and to South America, Shomette says. But for longer, transatlantic trips they were considered uneconomical because of their size – they could only carry around 1,800 tons of freight.

In 1922, the majority were sold for a song to the Western Marine & Salvage company, which set about stripping out reusable metals and parts before burning and sinking the remains.

The company went bust at the start of the Great Depression in 1929, and wildcat salvagers moved in to pick away at the scraps. In the early 1940s, Bethlehem Steel – America’s largest shipbuilder at the time – set about what proved to be another doomed salvage operation.

The vessels have since slowly slipped into nature’s grasp, in some places completely consumed, almost unidentifiable.

“At low tide all you see is these forest of things sticking up and at the north end of the bay,” Shomette says.

“It looks like shore, but it’s ships – bow to stern, bow to stern – I call these the flowerpot ships. Each of those ships have become islands – some have trees 30-40 feet tall … It’s very exotic, it’s just beautiful.”

In the wider Chesapeake Bay area, ospreys have thrived in recent years after almost being wiped out by the pesticide DDT during the mid-20th century.

The unique habitat of Mallows Bay has helped them and other birds of prey rebound in population since the agricultural insecticide was banned in the U.S. in the early 1970s.

It's not a ghostly apparition, but one of the photographs by Viennese artist Andreas Franke, which was displayed aboard sunken ship USNS General Hoyt S.Vandenberg and only accessible to competent divers.
Courtsey Andreas Franke
gallery

Super yachts: From A to Quattroelle

“They’re sort of symbols for the Chesapeake Bay in a sense and a symbol for what the environmental movement can do when they put their minds to it,” conservancy chief Dunn says.

“To be able to see them on every dock, post and shipwreck in the Chesapeake is heartening and a story of great educational value for the public at large.”

Local streams also support rare fish species such as the longnose gar and the warmouth, says Dunn, and Chesapeake Bay is an important nursery habitat for striped bass.

“The Potomac River is a treasured resource. It’s one of the major contributors of freshwater to the Chesapeake and it has this wonderful combination of history, recreational opportunities and natural beauty,” Dunn adds.

For Shomette, the educational benefits are key to the overall strategy plan. Along with encouraging more tourists to visit the area, he wants to see more kids kayaking around the vessels, like he did all those years ago, watching the ships and wildlife evolve.

“It would also contribute to the long-term assessment of that ship.”

Several hurdles remain before Shomette and Dunn can start celebrating, but they have reason to be optimistic of a positive decision next year.

According to the Chesapeake Conservancy, more than 60 local organizations and constituents have already backed the proposal, and the response from two public meetings held locally in November has further buoyed their mood.

“After the environmental impact statement and the public comment period, which is over on January 15, we can move forward. And hopefully we will have a dedication, if everything goes right, on the anniversary of the U.S. entry into WWI.

“It’s why we built the greater part of the vessels that are there.” 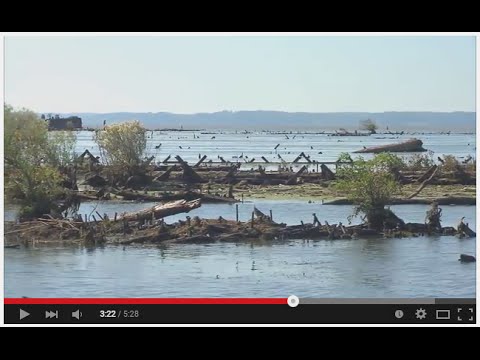