The Other Side: Where do coincidences come from?

(CNN)Royce Burton was teaching history at a New Jersey university when he decided to tell his class about a frightening experience he had as a young man.

He was a Texas Ranger, patrolling the Rio Grande in 1940, when he got lost in a canyon after dark. He tried to climb out but lost his balance just as he neared the top of a cliff. Suddenly Joe, a fellow Ranger, appeared and hoisted him up to safety with his rifle strap. Burton thanked Joe for saving his life but lost contact with him after both men enlisted in the military during World War II.
Burton was in the middle of sharing his story when an elderly man appeared in the doorway. It was Joe, the fellow Ranger. He had tracked Burton down 25 years later and walked into his classroom at precisely the moment Burton was recounting his rescue.
"I'll have Joe finish the rest of the story," Burton said, without missing a beat as the astonished classroom witnessed the two men's reunion.
You could call Burton's story an amazing coincidence, but James Hollis calls it something else: "synchronicity" -- a meaningful coincidence.
Read More
About this series

Some stories blur the lines between science, spirituality and the supernatural. These are stories from "The Other Side."

Synchronicity is a term coined by Carl Jung, the Swiss psychiatrist and mystic. It is the occurrence of two events that have no apparent cause and effect relation but are nonetheless connected by meaning, often in profound ways.
Synchronicity is an odd term, but it's a familiar experience to many people. Someone dreams of a childhood friend he hasn't heard from in years and gets a phone call from that friend the next day. Another person loses his mother and hears her favorite song on the radio on the day of her funeral. Someone facing a terrible personal crisis is the accidental recipient of a book that seems written just for him or her.
"Everybody has stories like that," says Hollis, a Jungian analyst and author who knew Burton and shares his story in the book "Hauntings: Dispelling the Ghosts Who Run Our Lives." "We live in a haunted world where invisible energies are constantly at work."
Yet few people understand how synchronicities work. Why do they happen, where do they come from, and does their existence suggest that everyone's life is somehow part of some cosmic drama shaped by unseen hands?
Or, as critics insist, is synchronicity simply psychological narcissism, the result of a person's desperate need to find meaning in odd connections that anyone would notice if he paid attention.
Those are the kind of questions that scientists, skeptics and psychologists have long asked about striking coincidences. The concept of synchronicity, though, is moving mainstream. Google the term and 5.4 million references pop up. Facebook has a page devoted to synchronicity. And there are people who collect synchronicity stories like kids used to collect baseball cards. They catalog them in pieces such as "29 Mind-Blowing Coincidences You Won't Believe Happened" or "20 Amazing Coincidences."
Even those who have never heard of synchronicity are influenced by it, some say. If you flip open the Bible and randomly pick out the first Scripture you see for guidance, or you pay attention to premonitions or astrology, you are relying to some degree on the principles of synchronicity.
"The interest in synchronicity is exploding," says Gibbs A. Williams, a psychoanalyst and author of the book "Demystifying Meaningful Coincidences."
"Many synchronicity disciples get off on this stuff as if they were junkies craving their next fix."

Of plum pudding and golden beetles

Synchronicity groupies have their favorite stories. Some have been cited so much it's difficult to know if they're true or apocryphal -- or a combination of both.
Consider the infamous tale of Emile Deschamps and his plum pudding.
In 1805, Deschamps, a French poet, was treated to plum pudding by Monsieur de Fortgibu, a stranger he met in a restaurant. A decade later, Deschamps goes to a Paris restaurant and orders plum pudding again. The waiter tells him the last dish has been served to someone else -- a Monsieur de Fortgibu.
The story gets odder. In 1832, Deschamps goes to a diner where someone offers him plum pudding. He jokingly tells his friends that the only thing missing is de Fortgibu -- and de Fortgibu, now an elderly man, promptly wobbles into the diner.
No wonder Jung was drawn to such stories of synchronicity. He was fascinated by strange experiences. He was a lifelong believer in the occult and claimed to have personal encounters with the paranormal.

Monster stories have been around for millennia. Now sleuths are hot on the trail. Can they catch one?
Jung's belief in synchronicity was, in fact, reinforced by a synchronistic encounter that was as eerie as Deschamps' plum pudding story.
Jung was treating a highly educated young woman who he thought relied too much on her intellect. He said she was "psychologically inaccessible" and concluded that a breakthrough could only come if something unexpected and irrational turned up during their sessions.
One day the woman told Jung she had a strange dream the night before in which someone had handed her an expensive piece of jewelry, a "golden scarab" shaped like a beetle. While the woman was sharing the dream, Jung heard a gentle tapping on an office window behind him. It was a large insect trying to get into the darkened office.
Jung opened the window and caught the insect when it flew in. It was a golden scarabaeid beetle, whose gold-green color resembled the color of the golden scarab jewelry.
"Here is your scarab," Jung said, handing it to the stunned woman.
The moment proved to be a breakthrough for the woman, Jung claimed. His decision to use the synchronistic moment to forge a breakthrough with his patient would become a model for other Jungian therapists. Their message: Synchronistic moments don't happen just to inspire wonder; they arrive to force people to reconsider their values.

Whenever an improbable coincidence occurs, says Hollis, the Jungian analyst, people should look for the possible message in that moment.
"We should ask if there is another dimension to it (the striking coincidence) that would ask of me, what change of attitude and what insight I might draw from this," he says. "Is there a task there that is corrective to my way of looking at things?"
In his book "Hauntings," Hollis explained the message behind the former Texas Ranger's improbable reunion. Hollis befriended him when both taught at the same university.
"For my colleague, who is a sensate 'facts are facts kind of guy,' the incident helped expand his psychic life by bringing a bit of mystery into it," Hollis wrote. "After his sensibility enlarged, he was even more aware of the presence of invisible energies amid his tangible world."
Some believe that people can train themselves to summon synchronistic moments.
Alex Marcoux, author of "Lifesigns: Tapping the Power of Synchronicity, Serendipity and Miracles," says that the "Universe" sends synchronistic signs to help people live more fulfilling lives. Marcoux, who insists that Universe be capitalized because of her spiritual beliefs, offers a five-step process on how to recognize and learn from synchronicity: Ask with intention, sense life's experiences, unravel the Universe's clues, validate the answer and express gratitude.
Marcoux says she's relied on synchronistic moments to help her make decisions on everything from the plotlines of her novels to her finances and relationships.
When asked how she can discern if a coincidence is a message or just a random moment, she says there are three indicators: The event is meaningful, improbable and she's hit with a sudden realization. The moment feels like an epiphany.
"The hair goes up on the back of your neck," she says.
Jung introduced the concept of synchronicity to Western audiences with the publication of his book "Synchronicity -- An Acausal Connecting Principle." But the concept predates him by thousands of years. As Jung pointed out, the concept forms the foundation for an ancient Chinese text used for divination called the I Ching, or the Book of Changes. Jungians say advances in quantum physics and chaos theory also reinforced the principles of synchronicity.

Why synchronicity could be a hoax

Some critics say synchronicity is not the result of an otherworldly influence. It's self-generated -- it's produced by people looking for answers to personal problems, says Williams, author of "Demystifying Meaningful Coincidences."
Williams says synchronicities are neither random events nor coded messages from a transcendent divinity. Striking coincidences often occur when people are experiencing a psychological gridlock in their life.
A person who swears off drinking, for example, may turn on the television set the same day of their resolution and see a movie about Alcoholics Anonymous. When one resolves to solve a personal problem, one will often see a "resonant message" embedded in a moment, he says.
"You're looking for patterns. It's like you're on your own psychological scavenger hunt. You look for pieces to fit the puzzle. The completed pattern is experienced as a synchronicity." 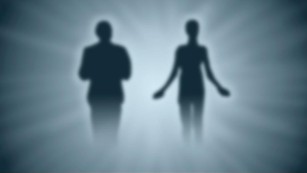 Some not only share their life but moment of death with loved ones. Are these 'shared-death experiences' real?
Some critics of synchronicity deny these events occur at all.
Skeptics cite one of the most frequently touted examples of synchronicity: the strange parallels between Abraham Lincoln and John F. Kennedy.
Both presidents had seven letters in their last names and were elected to office 100 years apart -- 1860 and 1960. Both were assassinated on a Friday in the presence of their wives, Lincoln in Ford's Theatre and Kennedy in an automobile made by Ford. Both were felled by assassins who went by three names, John Wilkes Booth and Lee Harvey Oswald. And both were succeeded by vice presidents who were Southern Democrats with the last name Johnson.
What does it mean?
Absolutely nothing, wrote Bruce Martin in an essay for Skeptical Inquirer magazine. Mathematical probability ensures that some coincidences will occur, but people assign less probability to coincidences than they deserve. Probability ensures that in a random selection of 23 people, he says, there is a 50% chance that at least two of those people celebrate the same birth date.
Synchronicity supporters also ignore facts that challenge the meaning of their coincidences, he says. Take Lincoln and Kennedy: They shared similarities, but they were also born and died in different months, states and at different ages. What about those differences?
"For any two people with reasonably eventful lives it is possible to find coincidences between them," Martin wrote in the essay "Coincidences: Remarkable or Random?"
"Two people meeting at a party often find some striking coincidence between them, but what it is -- birthdate, hometown