Six times Obama blamed the message, not the policy

Despite being renowned for his communications prowess, President Barack Obama often cites messaging problems at times when the American people seem opposed to elements of his agenda.

The latest example came in an interview with National Public Radio released on Monday, in which he said that he hadn’t done enough to explain his administration’s role in going after ISIS.

Here’s a look at the many times that Obama has blamed the message:

Asked by NPR interviewer Steve Inskeep last week what the American people were missing in his ISIS strategy, given low approval ratings for his handling of the issue, Obama pointed to a failure to highlight the plan’s successes.

“I think that there is a legitimate criticism of what I’ve been doing and our administration has been doing in the sense that we haven’t, you know, on a regular basis, I think, described all the work that we’ve been doing for more than a year now to defeat ISIL,” he said, using another name for the terror group. 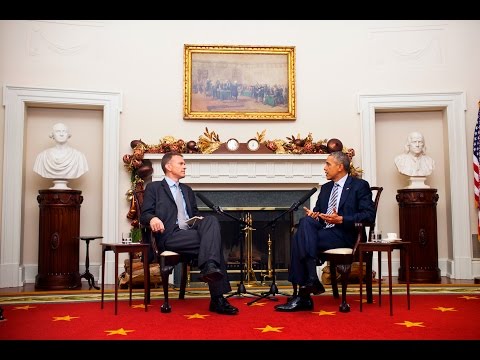 2) On Republican wins in the midterm elections, November 2014

Explaining why Republicans were able to take control of the Senate and gain seats in the House after 2014’s midterm vote, Obama discussed his focus on implementing policies rather than selling them.

“When you start governing, there is a tendency sometimes for me to start thinking, ‘As long as I get the policy right then that’s what should matter,’” he told CBS News.

“I think that one thing that I do need to constantly remind myself and my team is, it’s not enough just to build the better mousetrap,” he continued. “People don’t automatically come beating to your door. We’ve got to sell it, we’ve got to reach out to the other side and where possible persuade. And I think there are times, there’s no doubt about it, where, you know, I think we have not been successful in going out there and letting people know what it is that we are trying to do and why this is the right direction.”

3) On confusion over the Affordable Care Act, November 2013

Faced with angry Americans forced to change their health care plans even after he vowed, “if you like your plan you can keep your plan,” Obama apologized – but also cited a failure to communicate the realities of the law.

“I regret very much that what we intended to do – which is to make sure that everybody is moving into better plans because they want them, as opposed to because they’re forced into it – that, you know, we weren’t as clear as we needed to be in terms of the changes that were taking place,” he told NBC News in an interview.

4) On opposition to his Syria strategy, September 2013

Despite aggressively attempting to convince Congress to approve air strikes in Syria after President Bashar Al-Assad used chemical weapons, Obama pulled back from the plan when support appeared to be lacking. He later explained that his plan wasn’t packaged properly for lawmakers.

“I think that folks here in Washington like to grade on style,” he told ABC News. “And so had we rolled out something that was very smooth and disciplined and linear, they would have graded it well, even if it was a disastrous policy. We know that, because that’s exactly how they graded the Iraq War until it ended up blowing up in our face.”

Obama was self-critical of his own messaging strategy in the run-up to 2012’s presidential contest, which he nonetheless won decisively.

“The mistake of my first term – couple of years – was thinking that this job was just about getting the policy right. And that’s important. But the nature of this office is also to tell a story to the American people that gives them a sense of unity and purpose and optimism, especially during tough times,” he said in a CBS News interview.

“It’s funny – when I ran, everybody said, well he can give a good speech but can he actually manage the job?” he continued. “And in my first two years, I think the notion was, ‘Well, he’s been juggling and managing a lot of stuff, but where’s the story that tells us where he’s going?’ And I think that was a legitimate criticism.”

With the economy still deeply damaged by the financial crisis, Obama faced widespread pessimism about the nation’s fiscal state in the first few years of his presidency. That, he explained during a town hall meeting in Seattle, boiled down to his message.

“I think that one of the challenges we had two years ago was, we had to move so fast, we were in such emergency mode, that it was very difficult for us to spend a lot of time doing victory laps and advertising exactly what we were doing, because we had to move on to the next thing,” Obama said. “And I take some responsibility for that.”

He concluded, “We did not always think about making sure we were advertising properly what was going on.”