It slams the 'Grinches in GOPville" ahead of Christmas

Hillary Clinton’s campaign got into the holiday spirit on Monday, releasing a video that casts Republicans running for president as nothing more than a group of Grinches.

In the rhyming video titled, “How the Republicans steal progress,” the Clinton campaign compares GOP candidates like Donald Trump, Marco Rubio and Ted Cruz to the infamous holiday villain from the story “How the Grinch stole Christmas.”

“American families like progress a lot. But the Grinches in GOPville, it seems they do not. Together they shout with great grinchy zeal, that on healthcare their plan,” a moderator says before the video cuts to short clips of Trump, Carly Fiorina and Cruz each saying “repeal.”

How the Republicans Steal Progress | The Briefing 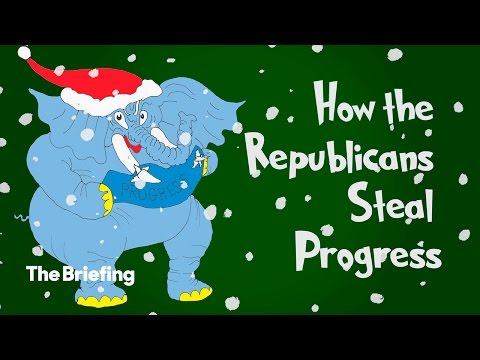 The video goes on to hit Republicans on immigration, Wall Street reform and Planned Parenthood, using a similar format with the narrator teeing up quotes from GOP candidates.

“Now if that weren’t enough to leave you all stunned. Take their stance on Planned Parenthood,” says the narrator before cutting to former Florida Gov. Jeb Bush and New Jersey Gov. Chris Christie saying “defund.”

The video closes with more upbeat messaging - and cartoons - that describe Clinton’s plans for the country.

“We’ll stop them from reaching their extreme grinchy goals, when we head out together to vote at the polls,” says the narrator. “We’ll send them back to GOPville, where they all belong. We will protect our progress and keep American families strong.”