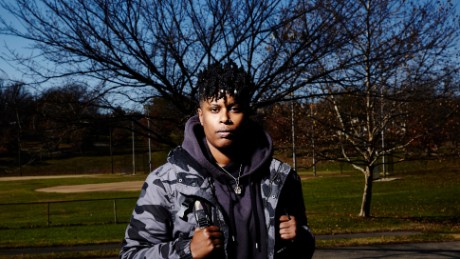 Brittony McKenney is one of eleven Baltimoreans photographed in the months after the death of Freddie Gray.

Baltimore (CNN)The trial for the first of the six police officers charged in the death of Freddie Gray is due to begin Monday in Baltimore. The death of Gray while in police custody sparked some of the most violent protests the city has ever seen.

It's been seven months since Gray's death. We returned to Baltimore to photograph residents as the city works to make sense of the year's events.

Ma'lae lives in Sandtown-Winchester, the same neighborhood in which Freddie Gray was raised. She is a kindergarten student at New Song Academy. "I want to be a ballet teacher" when I grow up, she said.
Read More

Born and raised in Baltimore, Kondwani Fidel had a tough upbringing and knows what it means to lose loved ones to violence. Fidel is a substitute teacher and spoken word artist. His poems tell stories of a rough upbringing in Baltimore while attempting to inspire change. When using poetry to connect with students, "I used my story as a blueprint for them," said Fidel.

As the new police commissioner of Baltimore, Kevin Davis came into his role in the immediate aftermath of the unrest. This is a pivotal point for the city, said Davis. "People who find themselves in the midst of a historic moment don't always realize that they are in the midst of a historic moment," he said, "I realize that's where we are." Davis is starting by establishing relationships with various groups in the community to prevent the type of unrest the city experienced in April and May.

A 44-year veteran of Baltimore schools, Nancy Neilson, principal of New Song Academy, says there is something special about her current school. All of the students come from the immediate neighborhood in west Baltimore. Her students perform better than many of their counterparts, but unfortunately, it is not rare for them to be touched by the prevalent violence in the community. During the unrest earlier this year, "they were frightened because they didn't know what was going to happen," Neilson said.

Niamke Nnamdi graduated from high school last year, and he is ready for the next step. "I am joining the Army," he said. After taking entry exams, Niamke qualifies for almost any position in the Army.

You can only ignore a group of people for so long.

"There was a sense of collective outrage about what happened to Freddie Gray that tapped into a deep well of despair," said William Murphy, the attorney for the family of Freddie Gray. He says the biggest lesson that Baltimore can take away from the year's events is "that you can only ignore a group of people for so long."

Former mayor of Baltimore, Sheila Dixon has emerged back into the spotlight after her 2010 resignation as part of a plea agreement in a criminal case. "I am beyond that," Dixon said, "That doesn't define who I am." Dixon says she is focused on rallying behind communities, addressing the dramatic rise in homicides and providing strong leadership. Neither Freddie Gray case nor the unrest that followed prompted the campaign, Dixon said.

The curfew affected all of us, but it brought us together.

A bartender at restaurant in the Canton neighborhood of Baltimore, Lincoln Kosmas remembers the days after the riots. During the citywide curfew, Kosmas said residents looked out for each other, and people checked on their neighbors. "It's affected the city in a good way," he said. "People have come together." While the spotlight remained on Baltimore, Kosmas said, "I really hope that we show we're a good city. I hope we do ourselves proud now that everyone is watching."

Kaleb Tshamba belongs to the historic Arch Social Club. More than 100 years old, the club has been traditionally African American and for males only. "We are one of the only historic black places left in Baltimore," Tshamba said. The club sits across the street from the CVS store that was burned during the April riot. Tshamba and other members of the club participate in the 300 Men March, which calls for a stop to violence. A sign on the front of the club's building reads, "We must stop killing each other."
<div class="el__embedded el