The odd woman out, Elizabeth Warren, will not be in attendance

Hillary Clinton was joined by 13 of the 14 Democratic women of the U.S. Senate at a fundraiser that amounted to a Monday night pep rally for the candidate who could become the first female president.

The Washington event was an attempt by the front-runner’s campaign to flex its establishment muscle as the first caucuses and primaries draw closer, but one Democratic leader was notably missing from the stage that hosted all the women: Sen. Elizabeth Warren.

Clinton never mentioned Warren’s absence – and ignored the questions when asked about it after the event, instead choosing to focus on her platform and the future of women in the Senate.

“We are going to do everything we can to put our country on the right track,” Clinton said. “And I am hoping that because of the election next year, this time we will be able to celebrate more Democratic senators and maybe even taking the majority of the Senate back.”

Despite signing a letter that urged Clinton to run for president in 2013, Warren has so far declined to officially endorse her campaign. The senator, who liberal organizers failed to draft into a presidential campaign for much of 2014 and 2015, told CNN earlier this year that the letter she signed was not an endorsement for the Clinton campaign.

“It is without a doubt that the single most qualified, by far, of any person in this race for president, is Secretary of State Hillary Rodham Clinton,” said Heitkamp of North Dakota.

“When women vote, women win and Hillary Clinton will be the next president of the United States,” added Gillibrand of New York.

New Hampshire’s Shaheen pledged that Clinton would in her state’s early nominating primary. And Klobuchar, of Minnesota, assured the audience of nearly 1,000 people that Clinton is “going to win Iowa,” the first in the nation caucus.

“Just like all of us, she still puts her pant suits on one leg at a time,” said Washington’s Murray, winning laughs from the other women.

Clinton has a stranglehold on the U.S. Senate, with 38 of the 46 – or 83% – of senators who caucus with the Democrats have already endorsed Clinton. That despite one of their own – Vermont Sen. Bernie Sanders – running against the former first lady.

Warren is one of the few who has yet to endorse and her spokeswoman did not respond to questions about why the senator was not attending.

“I am not sure why she wasn’t (here). Maybe she has a cold,” Sen. Barbara Mikulski said after the event, her tongue firmly in cheek.

Clinton told the audience that she would spend more on infrastructure, affordable education and fighting climate change, and pledged not to raise taxes on middle-class Americans.

“I will not raise taxes on middle-class families because they have to get back to where they were before they fell into that ditch of the great recession,” she said.

The campaign also rolled out a new video – titled “44 Boys Is Too Many” – that featured young girls reading letters they wrote to Clinton and speaking about the need for a woman president. 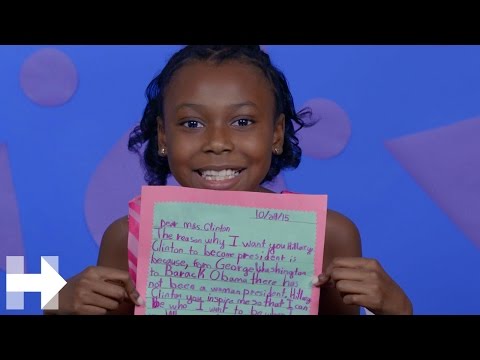 The fundraiser is also unique in that it is the first of 153 such events that’s open to the press.