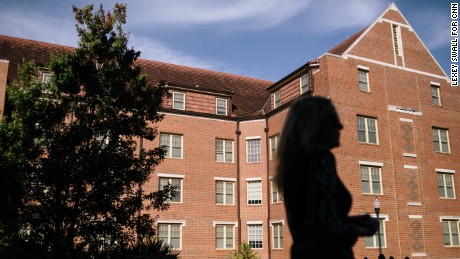 Maria, who survived a gang rape at Florida State University almost three decades ago, walks across the campus for the first time since that brutal attack. CNN agreed not to use her real name.

Ghosts of rape past: Can a survivor find solace in return to the crime scene?

By Moni Basu, CNN
Photos by Lexey Swall for CNN

Tallahassee, Florida (CNN)On game day, 70,000 football fans pack Doak Campbell Stadium to watch Florida State roar to victory. I wait for the post-party quiet of the following morning to wander through campus with Maria, knowing that a return to this place could be risky.

At the main entrance to the university, we run into two high school students from Tampa posing for a photo in garnet and gold Seminole jerseys. They want to enroll at FSU one day soon, they say, their cherubic faces lighting up.
How this story was reported

This narrative of a gang rape on the campus of Florida State University in 1988 was pieced together through hundreds of pages of documents and more than a dozen interviews.

CNN reporter Moni Basu contacted the survivor of the rape through her former attorney, Dean LeBoeuf. Then Basu began a series of conversations with her that culminated in the survivor's return to the FSU campus in Tallahassee for the first time since the attack 27 years ago.

Basu interviewed the district attorney who oversaw the case and an assistant district attorney who prosecuted it; the attorney for defendant Daniel Oltarsh, a Pi Kappa Alpha fraternity member who served time for the rape; FSU professors; the lead police investigator; and the victim's counselor. Basu requested an interview with Oltarsh but his lawyer did not respond to follow-up calls. She also reached out to a fraternity brother who cooperated with the police in exchange for immunity and to two other fraternity members who were indicted. The attempts to reach them were not successful.

Basu also examined hundreds of pages of case files at the Leon County Courthouse in Tallahassee, including the grand jury report and the rape survivor's deposition, as well as archival material at FSU's Strozier Library.

Maria was that way once: young and brimming with hope, excited to start the adult chapter of her life at a prominent state university bustling with students from all over the globe. In the fall of 1987, her mother dropped her off in this very spot, in front of the administrative offices housed in Westcott Building.
But college turned out to be a dark adventure.
Before she could finish her second semester, Maria was gang-raped on campus. Her assault made national headlines partly because the details read like sleazy fiction and partly because it involved one of the most prestigious fraternities on a football powerhouse campus.
Read More
It was a case I became intimately aware of as a journalist in Tallahassee at the time and one that I sympathized with as a former FSU student and campus rape survivor.
I expect the return to FSU to be a difficult journey -- for both Maria and me. It is the first trip back to campus for us since our departures from Tallahassee. In the years since, many things have changed at America's institutions of higher learning. Sadly, some have not.
Rape on college campuses was a serious problem then and remains one now. One in five college women said they were sexually assaulted, according to a Washington Post-Kaiser Family Foundation poll released last June.
It's a problem highlighted in the film "The Hunting Ground," which aired on CNN on November 22. The film delves into a connection between alcohol and sexual assault and explores a campus culture that protects perpetrators.
It also focuses on the stories of survivors who became activists and took the issue all the way to the White House and prompted a federal investigation of the handling of sexual violence complaints on campuses.
As the film demonstrates, the Internet and social media made it possible for rape survivors to connect with one another and find a modicum of comfort. Even power. When Maria and I were in college, that was not the case. We felt, and were, very much alone.
We both chose to keep silent about what happened, except in Maria's case, the crime was so heinous that despite her unwillingness, the state pursued charges against her rapists.
Maria felt a thousand eyes on her. She bore the brunt of unkind comments. She came back to her dorm room one day to find this message on the white board on her door: Whore. She withdrew, rarely spoke about the incident and even tried to kill herself. She survived through the years, but only barely.
A couple of months ago, Maria and I watched "The Hunting Ground" together.
We sat at a desktop computer in a sterile hotel lobby, sharing a pair of earbuds. I used the left one and she, the right. It was the first time I'd met Maria in person, though I had spoken with her once on the phone a few weeks after her rape.
Amid Spanish moss-draped oaks on FSU's campus, Maria took stock of her painful history as a young student on this campus
She watched the movie intently. I could see tears gathering behind her glasses and her hands trembling. A few weeks later, she agreed to go back with me to the scene of her attack. After 27 years, she was ready, she said, to come to terms with the incident that altered her life's trajectory.
I understood all too well the significance of her decision. I, too, had only recently gone public about my rape after a reporting trip to my native India to find a woman named Mathura, a rape survivor who was at the heart of a groundbreaking case.
I regretted that the newspaper stories I edited about Maria's rape had never given her voice. Throughout her ordeal and the months of court proceedings, she chose to remain anonymous. She was never named publicly and granted only a handful of interviews. The court records were sealed to protect her identity.
She agreed to speak with me on the condition that CNN not reveal her real name. She wanted to share her ordeal with other young women who have suffered rape or might be assaulted before they graduate.
"Maybe my story can help them in some way," she said.
On this Sunday morning in October, a warm sun illuminates her golden hair as we meander down asphalt paths that connect FSU's signature red brick buildings. I respect the courage it takes for her to stand with me on campus.
A little after 9, her smartphone lights up with a text from her boyfriend: "You've got this. I love you."
Maria sighs. She came here, she tells me, to face the ghosts that haunt her. She wants to take her 18-year-old self by the hand, lead her through the places that were dark and let her know: "It's going to be alright. You are safe."

A slideshow of chilling images

From the main entrance of the university, we walk to a campus hangout where both Maria and I spent hours studying, the Sweet Shop.
We take a break on Landis Green, the Central Park of FSU. Maria sits on a bench before live oaks laden with lacy Spanish moss that falls from the branches like tears. She hides her eyes behind Jackie O. sunglasses and takes slow drags of her Marlboro Menthol 100; I sense her anxiety as memories flood her mind.
We decide to retrace the steps Maria took on a damp spring night in 1988, past the blocks that once housed a newspaper office where I worked and a JR market that sold Texas taters and $1.99 six-packs of Schaefer beer. We stand before an all-new Dorman Hall, tonier than the version where Maria lived. From her room, she could see a row of sorority houses that included Chi Omega, where a few years before Maria arrived at FSU serial killer Ted Bundy murdered two young women.
We look the other way down Jefferson Street and recognize a motel-style apartment building with jalousie windows and air-conditioning units overworked even this far into autumn. We laugh that the ugliest building of all survived the bulldozers.
Around the corner is the place where Maria went on her last night of normal.
The Pi Kappa Alpha mansion with the stately white columns is no longer there, but Maria can picture it clearly in her mind. She points to the spot where she was tossed like a piece of trash, badly bruised and unconscious, just one drink away from death.
There's no clear storyline in her mind -- there wasn't then and there isn't now. She sees a slideshow of chilling images, blurry and yet so vivid at times that she can feel it all again.
Wine, a blue room, cold tiles, running water, flesh. And force. So much force.
Maria liked to drink and dance at an after-hours bottle club called the Late Night Library. On the evening of March 4, 1988, she was there with her friend Sandra. It was Friday, and the indie bar was hopping.
Maria arrived at FSU shy and introverted. Her mother was an alcoholic, and Maria had started drinking in her senior year at a girls-only Catholic high school in Louisiana. At FSU, she rebelled. She thought alcohol helped her feel more comfortable, and she developed a penchant for partying and a reputation for being promiscuous. She had already had many beers by the time she ran into Daniel Oltarsh, a political science and economics major she'd met at a pig roast several months before.
Oltarsh was handsome in a bookish way with blond curly locks and trendy round glasses that framed his blue eyes. Most of all, he was a Pike.
At the time, Maria could not bear to look at the headlines about her rape. But friends saved newspaper clips for her to see later.
Many of the men of Pi Kappa Alpha were well-heeled sons of prominent fathers. They wore starched Oxford shirts, double-breasted blue blazers and Rolex watches. Around campus, many considered them the kings of FSU's Greek system, admired and reviled all at once.
Maria felt honored that someone like Oltarsh would talk to her. So when he invited her to a party that night at the Pike mansion, she was beside herself. She walked back to her dorm, changed into a three-quarter sleeve sweater and black pencil skirt and poured herself a tumbler of tequila. She took the drink with her on the short walk to the fraternity house at 218 S. Wildwood Drive.
Oltarsh was waiting for her on the columned porch. They went upstairs to his room. He managed to get a bottle of white wine and Maria drank more. It was past 3 in the morning.
"Where is the party?" Maria asked.
There was none.
The details of what happened next are culled from court files, including police interviews with Pi Kappa Alpha members and a grand jury report indicting 23-year-old Oltarsh and two other fraternity members: Byron Stewart, then 21, and Jason McPharlin, 18, who was visiting from Auburn University.
A fourth fraternity brother was given immunity in exchange for his cooperation with the investigation. The documents include his version of what happened as well as a statement from McPharlin.
Maria was so drunk she could barely stand up. She told police Oltarsh got "aggressive" with her in his room and forced her to have sex. He then took her to the shared bathroom. He let other frat brothers know there was a girl available for sex. It was called "pulling a train."
<img class="media__image media__image--responsive" alt="Smoking helps calm Maria, who is recovering from years of post-traumatic stress, eating disorders and alcoholism. " data-src-mini="//cdn.cnn.com/cnnnext/dam/assets/151112173838-02-fsu-rape-restricted-small-169.jpg" data-src-xsmall="//cdn.cnn.com/cnnnext/dam/assets/151112173838-02-fsu-rape-restricted-medium-plus-169.jpg" data-src-small="//cdn.cnn.com/cnnnext/dam/assets/151112173838-02-fsu-rape-restricted-large-169.jpg" data-src-medium="//cdn.cnn.com/cnnnext/dam/assets/151112173838-02-fsu-rape-restricted-exlarge-169.jpg" data-src-large="//cdn.cnn.com/cnnnext/dam/assets/151112173838-02-fsu-rape-restricted-super-169.jpg" d