She was a glamorous Hollywood actress who romanced Clark Gable, Spencer Tracy and Jimmy Stewart onscreen and was hailed as “the world’s most beautiful woman.”

But Hedy Lamarr was bored.

So in a private life more compelling than some of her movies, she dreamed up ways to fight the Nazis during World War II and earned a patent for an idea that laid the groundwork for such modern technologies as Bluetooth, GPs and Wi-Fi.

Lamarr, on what would have been her 101st birthday, was honored Monday with an animated doodle on Google’s search page. The jazzy clip pays homage to her remarkable double career – actress by day, inventor by night – and introduces the late star to a new generation at a time when the science and technology fields are struggling to attract women. 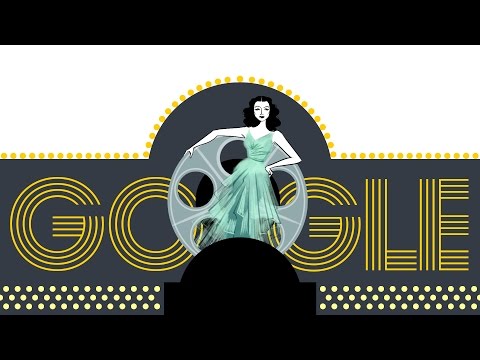 “She’s just so cool,” said Jennifer Hom of Google, who researched Lamarr’s life to create the animated clip. “She was very complicated and very accomplished at the same time.”

Born Hedwig Eva Maria Kiesler in Austria, Lamarr began working as an actress in Europe as a teenager and scandalized audiences in the Czech film “Ecstasy,” in which the camera lingered on her face as her character had an orgasm. She fled an abusive marriage in the late 1930s and came to Hollywood, where she changed her name to Hedy Lamarr, signed a contract with MGM and landed many roles as an exotic seductress.

Lamarr appeared onscreen regularly throughout the 1940s, most notably opposite Victor Mature in Cecil B. DeMille’s “Samson and Delilah.” But she grew weary of femme fatale roles that didn’t showcase her intelligence.

“Any girl can be glamorous. All you have to do is stand still and look stupid,” she famously said.

So during World War II, Lamarr drew upon her interest in science and military technology – gained in part through her first marriage to an arms dealer – to help devise a system to prevent the Nazis from blocking signals from radio-controlled Allied torpedoes. She teamed with composer George Antheil, a neighbor, to create a frequency-hopping system – based on the 88 keys in pianos – that would keep enemies from being able to detect the radio messages.

They received a patent for their idea, although the limitations of technology at the time prevented it from being implemented until after World War II. Still, their system would eventually form a basis for modern wireless communications technology, and Lamarr and Antheil were inducted into the National Inventors Hall of Fame in 2014.

As research for her Google doodle, Hom watched a lot of Lamarr’s movies and read books about her. She was impressed to learn the actress tinkered with mechanics and electrical engineering in her spare time and had a room in her home that was dedicated to inventing.

Hom’s doodle alternates between scenes of movie-star glamor and Lamarr’s sideline as an inventor. The actress looks bored in the back of a limo but perks up when she’s tinkering with theories in her lab.

“She was really curious and had an active intellect and she was always trying to learn,” said Hom, who spent two months full-time working on the doodle. “I like to think of her as superhero figure where you have a daytime personality and a nighttime personality.”

Lamarr died in 2000 at the age of 86. Who knows what kind of prescient tech entrepreneur she might have been as a young woman in the digital age?

One quote from the actress, found on her estate’s website, sounds like it could have been spoken yesterday.

“The world isn’t getting any easier. With all these new inventions I believe that people are hurried more and pushed more,” she said. “The hurried way is not the right way; you need time for everything – time to work, time to play, time to rest.”

MORE: The amazing invention that can “edit” genes