Carter and his wife are expecting a baby next year

Editor’s Note: This story contains spoilers about Monday night’s “Dancing With the Stars.”

We now know what the “Backstreet Baby” will be.

Live on Monday’s episode of “Dancing With the Stars,” contestant and Backstreet Boy Nick Carter revealed the gender of the baby he and wife Lauren Kitt Carter are expecting next year.

The big news came after Carter and dance partner Sharna Burgess’ emotional contemporary performance, which he dedicated to his wife.

In the post-performance interview, co-host Erin Andrews announced that the couple would also be learning the sex for the first time. They opened a big silver box with a bow to reveal blue balloons for Baby Boy Carter as the overhead screen read, “It’s a Backstreet Boy!” 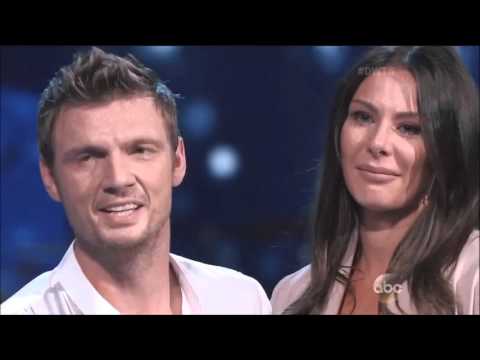 Kitt Carter, who is 16 weeks pregnant, said the pair had previously lost a child, and her husband said that getting pregnant again was tough going.

“There’s been times when we thought it wouldn’t happen,” he said.

It was also a happy show for Carter because he and Burgess received a perfect score and were safe from elimination.

Not so lucky were singer Andy Grammer and pro partner Allison Holker, who were booted from the show after a performance in honor of his mother, who died of breast cancer in 2009.

“It’s actually kind of fitting that I would leave tonight after really getting to honor (my mom) through dance,” Grammer said.