Ending polio: ‘We’re on the verge of making history’

Dr. Sue Desmond-Hellmann and Special to CNN
Updated 7:31 AM EDT, Mon October 26, 2015
Ad Feedback
A huge immunization drive in Nigeria has meant there have been no new cases of polio for more than a year.
Brent Swails/CNN

"We have never been closer to wiping out this terrible disease," she says

Editor’s Note: Dr. Sue Desmond-Hellmann serves as CEO of the Bill & Melinda Gates Foundation. The opinions expressed in this commentary are hers.

A bucket of human waste is a thing of beauty. That might sound peculiar, but let me explain.

In June of this year, I traveled to Nigeria to see firsthand the hard work of eradicating polio. At the time, the country was on the verge of going a full year without a case of the disease. During part of my trip, I spent time learning about disease surveillance.

That is where the bucket came into play. Haliru Usman is an environmental health officer in Kaduna state whose job it is to test sewage for the polio virus. Once a week, he takes out his bucket, rubber gloves, and bleach wipes to collect a sewage sample. He then packs it on ice, which can be difficult to come by, and makes an eight hour drive to a laboratory for testing.

This is clearly a challenging and smelly global health job. It is also unbelievably important. Vigilant disease surveillance is critical to the global goal of eradicating polio. Mr. Usman took pride in doing his work, because he knew it would help save lives.

Read: The race to zero: Nigeria’s fight to wipe out polio

Thanks to his dedication—and to the commitment of the Nigerian government, the Global Polio Eradication Initiative (GPEI), and thousands of heroic health workers – Nigeria reached the milestone of a year without polio one month after my visit. For the first time in recorded history, the entire African continent has gone a full year without a child paralyzed by wild poliovirus. To officially certify Africa polio free, we must protect this progress through 2017.

That brings me to the present: World Polio Day. Africa’s success should inspire and energize the world’s efforts to end polio once and for all. But our reflection shouldn’t stop there. This is also a reminder of the momentum we must sustain to wipe out polio in the two remaining endemic nations: Pakistan and Afghanistan.

Partners such as the United Arab Emirates have already been critical to getting the polio vaccine to thousands of previously unreached children in the region – but there is more to do.

It will take lots of buckets. It will take health workers going door to door with vaccines. Above all, it will take the continued commitment of developing countries, wealthy nation governments, and individual donors to ensure we wipe out one of humanity’s oldest scourges.

We are on the verge of making history, and everyone has the opportunity to contribute.

Today is the start of a 48-hour World Polio Day Donation Challenge. The Gates Foundation will triple your impact by matching your donation to Rotary International 2-to-1.

In the fight against polio, a little goes a long way. The oral polio vaccine, for example, costs as little as 14 cents a dose.

We have never been closer to wiping out this terrible disease, and we cannot stop short. As long as polio exists anywhere, we risk its resurgence – especially among the poorest and most vulnerable people.

Now is the time to make certain that no child will be paralyzed from polio ever again.

Wouldn’t that be a thing of beauty, too? 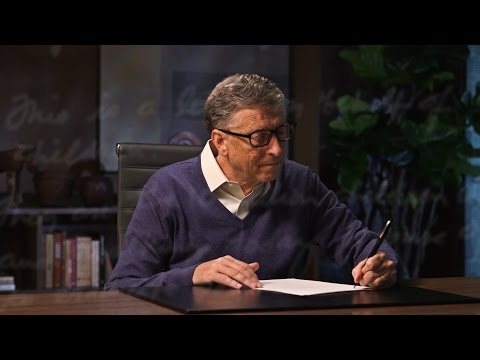