After his childhood, he was thrust into the public spotlight with his 2000 eulogy for the father

In recent years, he's followed in his father's footsteps as the leader of Canada's Liberal Party

Thanks to his father, Justin Trudeau’s name was well known in Canada before he launched his campaign earlier this year to – like the late Pierre Trudeau – become the country’s next prime minister.

But who, really, is Justin Trudeau?

At 43 years old, he doesn’t have the political track record of his famous father or even Stephen Harper, the man who he will succeed in the Canadian government’s top job. In fact, some in Canada cast him as a political novice who didn’t have what it takes to unseat an incumbent who has been in office since early 2006.

For years, though, Justin Trudeau has shown that he can pull off surprises. He did it during the 78-day national campaign, just as he has done before.

A few months later, U.S. President Richard Nixon arrived in Ottawa and made a bold, if lighthearted, prediction.

Justin Trudeau, leader of the Liberal Party of Canada, speaks to the media following the second leaders' debate in Calgary, Alberta, Canada, on Thursday, Sept. 17, 2015. The debate pits Prime Minister Stephen Harper and his Conservative PartyÃ¢s program of tax cuts and spending restraint against the Trudeau, who is pledging to raise taxes on the highest earners, and Thomas Mulcair of the New Democratic Party, who advocates increasing levies on corporations. Photographer: Ben Nelms/Bloomberg via Getty Images
Ben Nelms/Bloomberg/Getty Images
gallery

“Tonight, we’ll dispense with the formalities,” Nixon said during an April 1972 state visit, according to reports. “I’d like to toast the future prime minister of Canada: to Justin Pierre Trudeau.”

Justin would later be joined by two brothers, including Michel who was killed in a 1998 avalanche. A half-sister, Sarah, would come about 20 years after his own birth (and well after his father and parents had divorced).

If there’s ever any sibling rivalry, Justin Trudeau can always fall back on having been the chosen one – albeit chosen by a man, in Nixon, forced to leave office himself under scandal.

Pierre Elliott Trudeau was busy heading Canada’s Liberal Party and – between April 1968 and June 1979, then again from March 1980 to June 1984 – running the country as Prime Minister during much of Justin’s childhood.

He worked long hours but, his son remembered, had “infinite” patience and carved out time for his children.

Justin Trudeau recalled one such example at the start of his 2000 eulogy to his father: When he was around 6 years old, accompanying his father on an official trip to the northernmost reaches of Canada, near the North Pole. 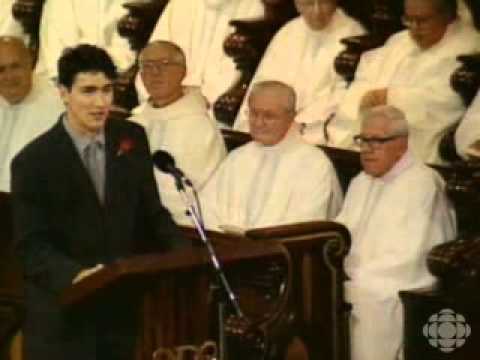 Amid the vast Arctic expanse, broken up only by shed-like structures, young Justin was dispatched on what he called “a special top-secret mission” to find what he hoped was “the reason for the existence of this high-security Arctic base.”

One building would provide the answer, he’d find out. He scaled a snow bank, got a lift to look through a window, then rubbed his sleeve on the frosty glass to get a good look.

“I saw a figure hunched over one of the many worktables,” Justin Trudeau recalled about 22 years later. “He was wearing a red suit with that furry white trim. And that’s when I understood just powerful and wonderful my father was.”

A French and drama teacher in Vancouver after college

While he kept a fairly low profile, by most accounts, Justin Trudeau availed himself well after that brush with Santa Claus. He’d go on to graduate from McGill University, in his family’s hometown of Montreal, in 1994.

Rather than follow his father into politics or even entrench himself in the Quebec city, Justin Trudeau chose a different path – out west, and as a schoolteacher.

While some advertisements lampooned him for being a drama teacher, his official bio states that Trudeau taught mostly French and math while in Vancouver. He got a degree in education from the University of British Columbia while living and working on Canada’s Pacific Coast.

The then 28-year-old Trudeau was working out west as a teacher when his father died and, with his eulogy at Montreal’s Notre Dame Basilica, he re-entered the public consciousness.

Trudeau talked about his father and the lessons he’d taught, including the importance of humility and public service.

“We knew that we were the luckiest kids in the world and that we had done nothing to actually deserve it,” he said. “It was instead something that we would have to spend the rest of our lives to work very hard to live up to.”

Gains credibility by beating up an opposition politician

In the years to come, Justin Trudeau assumed the mantle of an advocate more and more. Some of these efforts involved talking to youth or promoting environmental issues. Closest to his heart was his work to create the Canadian Avalanche Centre and its mission, hoping to produce some good out of his brother Michel’s death.

Yet it wasn’t until 2008 that Justin Trudeau became a full-pledged politician with his election as a Liberal Party parliamentarian representing the Papineau district of Montreal. Whispers followed Trudeau to Ottawa that he was a lightweight who’d only gotten so far on his family name. 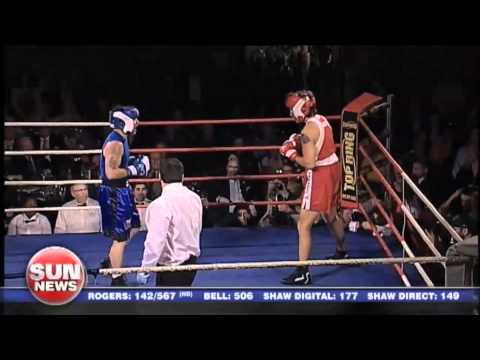 It was a charity boxing match and, according to the announcers, Trudeau came in as the underdog. That was in large part because of his opponent Patrick Brazeau, a buff, tattooed Canadian military vet and then-senator from Canada’s Conservative Party.

After entering the ring nodding his head in a shiny red robe, Trudeau found himself on his heels fending off Brazeau’s attacks for most of the first round. The next two rounds, however, were an entirely different story.

Trudeau took the offensive, pounding the conservative senator with flurries of punches that backed him against the ropes. Early in the third round, following a third “standing eight” count and with Brazeau bloodied, the referee finally called the match.

On the campaign trail, Trudeau and the Canadian media frequently played up his passion and knack for boxing.

Ahead of a key debate, for instance, the Liberal Party posted a picture of a sparring Trudeau under the headline: “Justin Trudeau ready to fight for Canadians.”

Trudeau, though, is much more than a Santa Claus spy or charity boxer. On his website, he stresses he is also a family man with his three children and wife Sophie Gregoire. Gregoire has been a celebrity in her own right, as a former well-known Quebec television and radio host who has earned accolades for activism on topics like eating disorders, mental health and women and children’s issues.

Still, the politician’s website – like much of Trudeau’s time – is dominated by talk of issues. And it suggests that Canada will see a lot of change once Harper is out of office. These include:

• Make Canada’s government more accessible and transparent, including further opening up Parliament and not interfering with “watchdog” groups

• Ensure that Canadians continue to receive mail to their doors

• “Reopen Canada’s doors” to immigrants, particularly those with family living in the country and welcoming more refugees from Syria

• Maintain military spending, cutting spending for an F-35 stealth bomber jet and ending the combat mission in Iraq while scaling up Canada’s involvement in international peacekeeping

Above all, though, Trudeau said after his election Monday night that he hopes to bring hope to Canada.

“We beat fear with hope, we beat cynicism with hard work. We beat negative, divisive politics with a positive vision that brings Canadians together,” he said.

“Most of all we defeated the idea that Canadians should be satisfied with less, and that better isn’t possible. My friends, this is Canada, where better is always possible.”