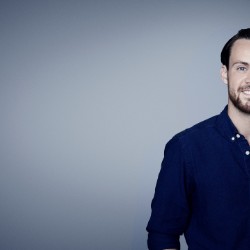 Editor’s Note: Art often reflects the political pulse of society and the issues that people care about. Throughout the 2016 election cycle, CNN Politics will be profiling various influential and politically conscious artists in the “Get political” series.

The creations of street artist Ron English, who considers his work a success “if I don’t go to jail,” are inherently political. The pop artist weaves elements of high culture like iconic imagery from Vincent van Gogh and Leonardo da Vinci with pop culture characters like Homer Simpson and Ronald McDonald.

The Dallas native has gotten arrested many times for using public billboards, ad spaces and other highly visible spaces for his paintings and sculptures— often illegally because he says that when he tried to buy ad spaces to protest issues like the Iraq war or corporations like McDonald’s he was unable to.

“The things that I wanted to say weren’t allowed to be said,” English told CNN.

From addressing the deleterious effects of fast food in McDonald’s themed artwork, to designing Chris Brown’s 2011 “F.A.M.E.” album cover, to creating iconic murals like the Barack Obama-Abraham Lincoln portrait fusion, English’s work has made waves in both the art world and political circles.

“I have been doing what is now called street art since the 1970s and the main impetus behind me doing art on the streets was that’s where people are,” English said.

And the people, English says, will do so much better if Vermont Sen. Bernie Sanders were president.

English, along with a group of 128 celebrities like Susan Sarandon, Will Ferrell and Danny DeVito, signed a letter endorsing Sanders.

Asked whether he thinks Sanders, who is running to the left of Democratic front-runner Hillary Clinton, can galvanize enough support to win the nomination and eventually, the presidency, English said, “I see a scenario where it happens.”

“Eight years ago my wife was talking to her father … and she said there’s no way in hell a man named Barack Hussein Obama will be elected as president of the United States of America, and we saw it happen,” English said.

See English getting political in the video above and check out more from the series.