Amber Rose, an actress and model known for her personal style and steady position on the gossip pages, staged a “SlutWalk” in Los Angeles on Saturday that has folks debating the usefulness of the term and what it represents.

SlutWalks started in 2011 in response to a flippant remark reportedly made by a police officer after a spate of sexual assaults on the campus of Canada’s York University. According to local media reports, the officer said: “Women should avoid dressing like sluts in order not to be victimized.”

Women in Toronto, outraged by the comment, took to the streets dressed in lingerie and skimpy clothing, to spread the message that women should not be subject to sexual violence regardless of what they’re wearing.

The notion spread, and SlutWalks now occur year-round across the globe. Rose announced recently that she would headline a walk at L.A.’s Pershing Square.

“[W]e recognize that shaming, oppression, assault and violence have disproportionately impacted marginalized groups including women of color, transgender people and sex workers, and thus we are actively working to center these groups in this event,” reads a statement on the Amber Rose SlutWalk webpage. “We deeply value the voices of marginalized groups and have a strong desire to find common ground among all of our intersections.”

Rose, a former stripper who gained fame during her relationships with rappers Kanye West and Wiz Khalifa, has lately been speaking out against the concept of “slut shaming,” or slamming a person for their sexual choices. She and friend Blac Chyna walked the MTV Video Music Awards red carpet in August wearing outfits emblazoned with phrases used to denigrate women.

Rose told the SlutWalk crowd about the first time she was “slut shamed” at 14. She then tearfully said she forgave West for saying he needed “30 showers” after being with her and Khalifa for calling her nothing but a stripper.

Rose appeared at the walk wearing black lingerie and her signature platinum blond buzz cut. She carried a sign that said “Strippers have feelings too” and started a chant that’s not publishable here – the gist being that women own their bodies and have freedom of choice.

The Los Angeles Times reported that the march was attended by “several hundred” people, mostly women. Some wore undergarments and wrote slogans on their skin while a few even went topless. “My clothes are not my consent,” said one sign.

Online supporters said the SlutWalk message is important for men and women to grasp.

“the #amberroseslutwalk was making the important point that women’s bodies are theirs to control, no one elses,” wrote a Twitter user who goes by “Blige.”

“Stop shaming women for their bodies and their choices,” wrote J. Emanual on Twitter. “Let them own their sexuality.”

Some disagreed that the “SlutWalk” is the way to go about achieving equality.

“Im thinking something has gone seriously wrong with the education of girls #feminism #amberroseslutwalk,” tweeted someone who goes by DearAunty on Twitter.

“This ‪#‎amberroseslutwalk‬ is a shame. Instead of it being about defending rape victims … it’s turned into these crazies wanting to b topless. So what they are saying is that we should all walk around naked and that’ll prevent rape? I’m sorry … but I’m confused. Maybe we should teach boys to RESPECT women, instead of women degrading themselves? That’s an idea,” wrote Gabby Mooney on Facebook.

Im thinking something has gone seriously wrong with the education of girls #feminism #amberroseslutwalk pic.twitter.com/bTf5zYc6M7

Milo Yiannopolous, a writer for the conservative website Breitbart staged a small counterprotest, holding a sign that read “‘Rape culture’ and Harry Potter. Both fantasy.” He was joined by libertarian activist Lauren Southern holding a “Regret is not rape” sign.

A Go Fund Me campaign to support the Amber Rose Slut Walk and likeminded efforts had raised more than $55,000 as of Sunday. “We join the movement on this cause against sexual injustice, victim blaming, derogatory labeling and gender inequality,” Rose’s website says.

The walk is only Rose’s latest effort to end slut shaming; she recently starred in a Funny or Die video titled “Walk of No Shame,” which turns the idea of women slinking home shamefully after sexual encounters on its head.

Walk Of No Shame with Amber Rose 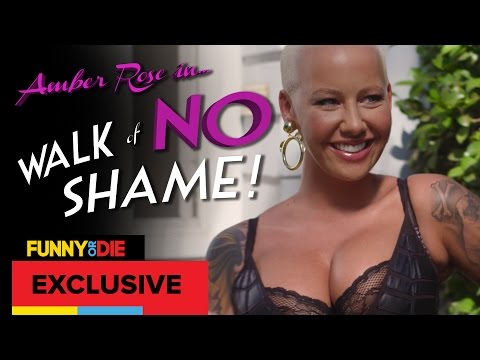