Before Douglas County, Oregon, Sheriff John Hanlin found himself answering questions about a school shooting in his backyard, he posted a link to a video raising questions about another – the Sandy Hook Elementary School massacre that left 20 children and six adults dead.

“This makes me wonder who we can trust anymore …” Hanlin wrote on his Facebook page on January 13, 2013, above the conspiracy video link. “Watch, listen and keep an open mind.”

That post – which claims the government concocted the Sandy Hook rampage, actors played the victims’ family members and the slain students are still alive – has since been taken down, albeit not before many saw it.

When asked about the video Friday, Hanlin told CNN that “I know what you’re referring to, but that’s not a conspiracy theory that I have.”

Whatever his intentions, the post is one of several provocative moves from Hanlin over the years, ones in which he’s drawn lines in the sand and challenged other authorities – even the highest in the land.

A staunch believer in the Second Amendment, he fired off a letter two years ago to Vice President Joe Biden saying he would never comply with any gun control law coming from the Obama administration.

Now that he’s having to contend with a shooting by a man clothed in body armor who carried four guns and killed nine people, some analysts wonder whether he will change his position.

Interviewed Friday morning on CNN’s “New Day,” Hanlin said gun control has “certainly got to be part of the discussion” but insisted it was inappropriate for him to air his opinions the day after the shooting.

But under continued questioning, Hanlin finally said, “My position on it has not changed.”

Oregon governor: Now is not the time to talk gun control

Even as news reports citing other officials identified the 26-year-old man who killed nine at Umpqua Community College before being killed himself as Chris Harper Mercer, Hanlin has refused to say the shooter’s name. He’s leaving that that to the Oregon medical examiner’s office.

Community members attend a candlelight vigil at Stewart Park for those killed during a shooting at Umpqua Community College in Roseburg, Oregon, on Thursday, October 1.
Gosia Wozniacka/AP
gallery

“I will not name the shooter,” Hanlin said Thursday, hours after the rampage. “I will not give him the credit he probably sought prior to this horrific and cowardly act. You will never hear me mention his name.

“We would encourage media to avoid using it, to not repeat it. We encourage you not to glorify and create sensationalism for him. He in no way deserves this. Focus your attention on the victims, on the families, helping them get through this difficult time.”

Social media lit up with cheers and scorn after his remarks.

One Twitter user expressed “serious respect” for Hanlin for not naming the shooter.

Another person said Hanlin’s decision was gutsy and an example for others in law enforcement.

“We need more lawmen and lawwomen like Sheriff John Hanlin. Courageous, tough and fair. We support and stand with you,” wrote Matt Sere.

@DouglasCoSO we need more lawmen and lawwomen like Sheriff John Hanlin. Courageous, tough and fair. We support and stand with you.

But not everyone was supportive. Colleen C said Hanlin “fought against universal background checks & gun sense laws. He is part of the problem”

In January 2013 – just weeks after the Sandy Hook shooting – Hanlin sent a letter to Biden, strongly expressing his displeasure at President Barack Obama’s push to pass gun control legislation. The vice president had been tasked with leading those Obama administration efforts.

“Gun control is NOT the answer to preventing heinous crimes like school shootings,” Hanlin wrote. “Any actions against, or in disregard for our U.S. Constitution and 2nd Amendment rights by the current administration would be irresponsible and an indisputable insult to the American people.”

But Hanlin, who has been Douglas County sheriff since 2009, didn’t stop there. Not only did he disagree with the Obama administration’s push, but he vowed that as sheriff, he would not enforce any gun control laws or executive orders on the subject.

Hanlin also spoke out earlier this year against state legislation, Senate Bill 941, that would require criminal background checks on private gun sales. Hanlin said the measure wouldn’t keep guns out of the hands of criminals and his department didn’t have the resources to properly enforce it. 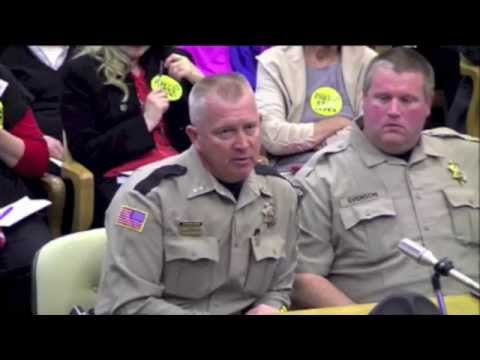 Despite his opposition, the bill became law and went into effect in August, according to The Oregonian newspaper.

Months later, the president of the Brady Campaign and Center to Prevent Gun Violence does not think that someone he calls “a delusional conspiracy theorist” should be a member of law enforcement, much less one who can be trusted to “lead an unbiased investigation into the (Roseburg, Oregon) tragedy and think about the things that we can do to prevent future tragedies like this from happening.”

American deaths in terrorism vs. gun violence in one graph

CNN’s Sara Sidner and Kyung Lah contributed to this report.