Would Hillary Clinton be this bold today?

Long before Benghazi, email scandals, a globetrotting run as secretary of state and the “18 million cracks” she punched in the glass ceiling during her 2008 presidential campaign, the then-first lady carved out a personal – and audacious – slice of history.

Picture Clinton as a risk-taker, pushing the political envelope in a way that would surprise critics of her current cautious, scripted White House bid, as she stepped up to a podium in China, on September 5, 1995 – exactly 20 years ago on Saturday.

Clinton’s tour de force, with its sharp implicit criticisms of her hosts, was a unique moment in a political career that unfolded in sharply polarized times – because she actually won praise from both sides of the political aisle in Washington.

The Beijing speech was the moment when millions of people outside the United States first came to perceive Clinton as a political celebrity independent of her husband President Bill Clinton. The platform she built would later help lead the way not just to years of advocacy for women’s and children’s rights. It would set her on a path to a political future that would encompass a Senate seat, the State Department and could end back in the White House as the first woman president after a campaign heavily focused on gender.

“In hindsight, I am kind of shocked that we did it, and we did it the way we did it,” said Lissa Muscatine, who made the trip with Clinton as her speechwriter. “The speech just elevated her stature as a voice for women in a way no one predicted. We had no idea it was going to become this enormous thing and that she was going to become iconic.” 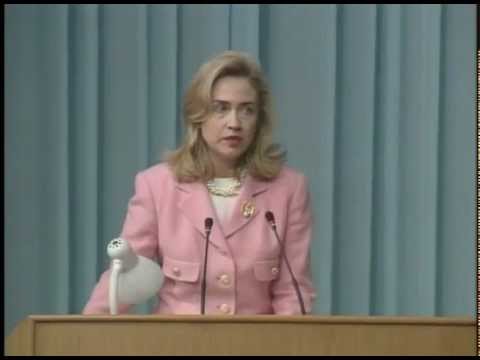 For Clinton, the speech came at a tough time. Her image was sullied by the crash of the White House health-care initiative that she piloted. The administration, meanwhile, was under siege from Newt Gingrich’s Republican revolution, which had recently seized control of the House for the first time in a generation.

There were plenty of reasons why shouldn’t have gone to Beijing at all. Some U.S. officials feared the visit might worsen relations with China, which were already tense because of the dispute over Taiwan and the arrest of dissident-turned-U.S.-citizen Harry Wu by communist authorities.

Hillary Clinton was a radioactive figure in Washington, and some White House aides feared a return to the spotlight would exacerbate a feud with GOP leaders.

U.S. First Lady Hillary Clinton talks with delegates at the Fourth World Conference on Women after her speech on September 5, 2995 at the Beijing International Convention Center.
EMMANUEL DUNAND/AFP/AFP/Getty Images

But Clinton had been quietly working to deepen her already long-standing interest in women’s and children’s rights. She stepped in to address a world poverty conference in Copenhagen in March 1995 when Vice President Al Gore could not make the trip. A South Asia swing that year also left a deep impression on her.

Documents also show a characteristic concern about the press. One includes biographies of journalists on her plane. NBC’s Andrea Mitchell was described as “a very aggressive and a very good reporter” and ABC’s Ann Compton was “aggressive … but usually very fair.”

One memo notes Clinton’s preference for dealing with local reporters.

“This will help us get around her aversion to the national Washington media,” said the memo, hinting at Clinton’s antipathy to Beltway reporters that still festers as she mounts her 2016 campaign.

Despite reservations, senior foreign policy officials signed off on the trip by the time she headed out over the Pacific toward China.

“I want to push the envelope as far as I can on behalf of women and girls,” Clinton recalls telling her staff, in her post-White House autobiography “Living History.”

But Clinton also wrote that she was nervous, underscoring the political risk she faced.

“I didn’t want to embarrass or let down my country, my husband, or myself,” Clinton wrote. “And I didn’t want to squander a rare opportunity to advance the cause of women’s rights.”

U.S. First Lady Hillary Clinton arrives at the site of the Women's NGO Forum to deliver a speech on September 6, 1995 in Huairou, China.
ROBYN BECK/AFP/AFP/Getty Images

Clinton, then 47, stepped up to a podium featuring a cheap white table lamp in a spartan conference auditorium before delegates from 189 nations. The backdrop was a blue curtain and a couple of ferns in white pots.

She spoke in unambiguous language, which was startlingly blunt compared to the turgid prose usually doled out at such events.

“We were fairly confident that the speech was good, even though we had to walk a diplomatic minefield, but for an eternity, there was absolutely no response from the audience,” she said. “They looked like statues and we got really panicked, and we thought ‘My God, what if we misread this?’”

But Clinton plowed on, condemning the selling of girls into prostitution, rape used as a weapon of war, genital mutilation and the drowning and suffocating of babies whose misfortune was to be born female.

“It is time to break the silence,” she said. By now delegates were cheering. Some even started to bang their desks.

“It is a violation of human rights when women are denied the right to plan their own families and that includes being forced to have abortions or being sterlized against their will,” Clinton warned.

Though she did not mention China specifically, the comment was an obvious rebuke towards communist authorities over China’s so-called one child policy.

There was no immediate reaction from Clinton’s hosts. In the days before the Internet and social media, Beijing authorities effectively muzzled Clinton inside China by blacking out television broadcasts.

The next day, when Clinton went to the Beijing suburbs, women’s groups activists were jostled by Chinese security forces. Secret Service agents formed a human chain to get the first lady’s staff inside a movie theater during a driving rain storm, for a second speech.

Three days later, the official Chinese propaganda machine grinded into gear, insisting that women in the communist nation had a much better life, citing data on violence against females in American and the paucity of U.S. female business leaders.

Back home, the response to Clinton’s speech was almost universally positive – even some of her GOP antagonists conceded she did well.

A record of the White House comment line for September 5-8 showed 170 people called to praise the first lady’s speech while 80 criticized it.

The press back home liked the speech too.

“Hillary Rodham Clinton said the right thing in China,” opined the San Jose Mercury News. “She sermonized, more than once, in the right give ‘em hell tone.”

Saundra Smokes, a columnist for the United Features Syndicate, gave Clinton a “Bravery of the Week” award because she flew “into the dragon’s den in Beijing and hurled some powerful verbal missiles at Chinese leaders.”

There were holdouts. In a letter to the editor, Lester H. Lee of Sunnyvale complained in a letter to the Mercury News that Clinton did nothing to patch up Sino-U.S. relations and didn’t “bother to understand” China.

In retrospect, her visit to Beijing was a first glimpse of what would become a prickly relationship with Beijing that boiled to the surface several times when she was secretary of state and could become important if she is president.

Two decades later, it is difficult to pinpoint the exact impact of the speech. But it is inarguable that the cause of women’s rights and gender equality she highlighted in Beijing has become a central theme in global politics and economics. Many nations have now adopted laws outlawing the kind of discrimination Clinton condemned.

“It feels like it was yesterday,” Clinton said in an interview broadcast by MSNBC on Friday.

“I was very humbled and proud at the same time to represent the United States and make that speech and to set forth a platform for action,” she said. “Twenty years later, I would say this – women and girls have made progress in health, in education …. but if you look at economic rights and participation, political rights and participation, security and conflict, we have a lot to do.”

“I think what she had to have recognized when she stood up and saw the reaction to what she said was ‘I can make a difference here,’” she said. “‘I can really play some role in helping women who have been so significantly marginalized in so many places in the world move to a place where their rights are recognized.’”